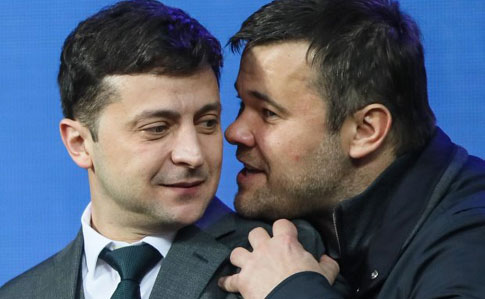 Ukrainian President Volodymyr Zelensky has ‘responded’ to a petition demanding the dismissal of his highly controversial Head of the President’s Administration, Andriy Bohdan by claiming that he has already dismissed him.  Such a response to a petition endorsed by almost 26 thousand Ukrainians seems as cynical as the ploy used to bypass the law on lustration which expressly prohibits Bohdan from holding office.

This is a change in name alone, aimed at flouting the law on lustration, and categorically not the reaction sought by the signatories to the petition.

Bohdan had most recently been known as the lawyer representing Ihor Kolomoisky, the Ukrainian oligarch widely seen as having played a major role in Zelensky’s victory. The 42-year-old’s public profile, however, dates back to the presidency of Viktor Yanukovych when he twice served as government representative on ‘anti-corruption policy’, holding at the same time the post of ‘Deputy Minister of the Cabinet of Ministers’. After reappointment in July 2013, he held the post until after Yanukovych and his people fled to Russia.

The amount of time altogether in that post, and the fact that he did not himself resign, means that he unquestionably falls under the 2014 Law on Cleaning up Government (the lustration law) and is prohibited from holding public office for 10 years.

Bohdan also asserted that he had fallen under the force of the lustration law “unfairly’.  This was purportedly because he had uncovered corrupt dealings by which billions in public funding were being syphoned off.  Bohdan claimed that the person behind the corrupt arrangement was one of the authors of the law on lustration.  As well as failing to provide a name, he was also not forthcoming on how logistically that would have worked.  The Law on Lustration does not name individuals, but rather identifies posts which persons who held particular posts in the Yanukovych regime cannot hold for ten years.  There was nothing to indicate, in 2014, that Bohdan would aspire to any particular post, let alone that of head of the President’s Administration.

It seems very likely that the Zelensky team were pinning their hopes on the Constitutional Court deciding that the lustration law is unconstitutional.  On 17 April, just days before the second round of voting which was already expected to bring Zelensky to power, Skhemy investigative journalists reported an alleged secret meeting between Andriy Bohdan and Stanislav Shevchuk, the then Head of the Constitutional Court.  The publicity that caused, and protests since Bohdan’s illegal appointment, may possibly have led to the anticipated judgement again being delayed.

A month after Bohdan’s appointment and the appearance of a petition which had reached the requisite 25 thousand in record time, Zelensky changed the name of Bohdan’s post.  This sounds like the sort of proposed solution to a problem that would raise a laugh or two, no more.  Instead, it was carried out, presidential decrees and all, with Zelensky now acting as though the problem is resolved.  It seems very unlikely that the signatories to the petition would agree.

This is the second time over the past week that the President has tried to make a joke out of something that others do not find amusing, with both involving Bohdan.