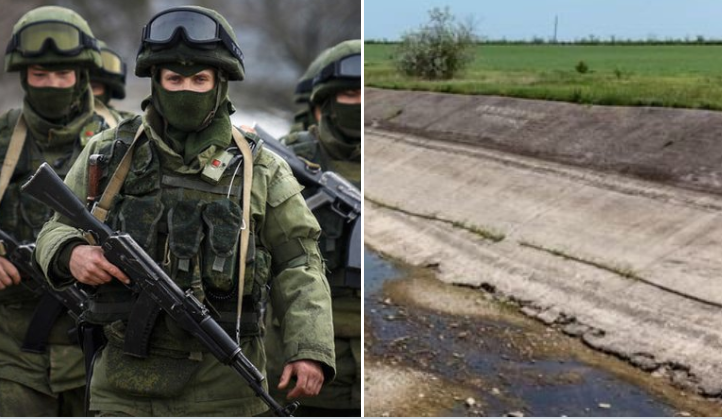 Attempts by the Russian-installed occupation authorities in Crimea to initiate ‘negotiations’ with Ukraine over water supplies to the parched peninsula have received swift and unequivocal rejection from Ukrainian public figures, including the Head of the Crimean Tatar Mejlis, Refat Chubarov, and the President’s Representative on Crimea, Anton Korynevych.  It is important that these are the voices heeded by Ukraine’s political leaders, as the move would be effective recognition of Russia’s annexation.

Up till Russia’s invasion in the spring of 2014, mainland Ukraine provided Crimea with 85% of its fresh water needs via the North-Crimean canal which links the main source of the Dnipro with the peninsula. The supplies were terminated in April 2014, and with very little rain this year, the situation is becoming very serious. Lack of a constant supply of water was probably a major factor in causing the chemical spillage and serious consequences to health in Armyansk in September 2018.  Russia is unable to provide the amounts of fresh water needed to sustain agriculture on the peninsula.  It is quite likely that its aggression in Donbas was always partly aimed at ensuring a land corridor to Crimea.  It was recently suggested that Russia’s new aggression in the Sea of Azov and the resulting economic strangulation are intended to press Kyiv into reopening the canal.

On 12 August a somewhat surreal rant by Georgy Muradov, the Russian-installed ‘Deputy prime minister’ of Crimea, received wide coverage in the Russian media.  Muradov claimed that Crimea has “a right” to Dnipro water as the river’s source lies near Smolensk in Russia.  The representative of the country which illegally invaded and annexed Crimea saw fit to accuse Ukraine of violating international humanitarian and even Ukrainian law, before demanding “serious talks with Kyiv”.

The hard facts about the legal situation were spelled out very clearly by Anton Korynevych, President Volodymyr Zelensky’s Representative in Autonomous Crimea.

He pointed out that Crimea is Ukrainian territory and is not a part of Russia. The latter cannot pose questions linked with Crimea within the framework of inter-state relations.  “The Dnipro River does not flow through the territory of Crimea. Ukraine did not block the source of the river, but the technology equipment (a canal) which is on Ukrainian territory, as it had the full right to do.”.

While Korynevych notes that, according to all calculations, there is sufficient fresh water in Crimea to meet the needs of the population, he also stresses that it is the occupying state that is responsible for ensuring provision of all necessary resources. “All claims presented by the occupier state for Dnipro water, therefore, do not have any legal or international-legal basis. Crimea is Ukraine.”

Ukraine has a duty to ensure de-occupation of Crimea

In July 2019, Danylo Hetmantsev, an adviser to President Zelensky, said in an interview that he believed that turning off the water was harming Ukrainian citizens.  He claimed that such methods were “destructive” and said that after the parliamentary elections, ‘Servant of the People’ [the party associated with Zelensky], would initiate the creation of a committee on issues connected with occupied territory. Since that party won an absolute majority in parliament, Hetmantsev’s words aroused concern among the many who believe, on the contrary, that it is Russia’s occupation that is harming Ukrainian citizens and that reinstating the water supply would be the first step towards acceptance of the Russian-imposed situation.

Hetmantsev is the only person in Zelensky’s team who has thus far expressed such a view, though it is possible that his interview was intended to test the water. It is to be hoped that Zelensky is consulting with members of the Mejlis [representative assembly] of the Crimean Tatar people and to civic groups monitoring the human rights situation under Russian occupation. And that he or his team read the response to the new calls for ‘negotiations’ from Refat Chubarov, the Head of the Mejlis,

Chubarov wrote of the need for clear explanation of the fact that “a country which is facing armed aggression and occupation of a part of its territory does not merely have the right, it has the duty (!) to use national resources available on its territory to free the territory seized or to at least make it more difficult for the occupying state to establish itself on the territory it has occupied”.

He noted that cessation of Dnipro water supplies, and then, from 20 September 2015, the civic blockade of Crimea and then finally, the total termination of electricity supplies, had cost the Russian occupiers billions each year in maintaining the territory they are illegally occupying.

“So do not even hypothetically discuss the subject of supplying water, electricity or reinstating railway communications between mainland Ukraine and Crimea without total, immediate and unconditional de-occupation and the reinstatement of Ukraine’s sovereignty over the Crimean peninsula and the adjoining waters of the Black Sea and Sea of Azov.”