Why are Ukrainian legislators willing to see innocent men serve life sentences?Lutsenko is helping block justice for innocent life prisonersDeath of Ukraine’s most famous torture victim to be reinvestigatedTortured & Almost Certainly Innocent Ukrainian Life Prisoner Dies Without JusticeForced to hunger strike in search of justice for their sonsUkraine’s MPs block last chance of justice for tortured Ukrainian prisonersJudicial Review demanded for Life Prisoners Tortured into ‘Confessing’ to AnythingZelensky’s ‘survey – legally questionable and cynically populistWhat judicial reform when it’s not Russia, but Ukraine that refuses to release an innocent life prisoner?Legislative flurry in Ukraine leaves MPs’ immunity ‘cancelled’ yet still intactCrimean Tatar political prisoner ‘retried’ until Russia’s FSB got the sentence they wantedApplication practice of Article 110 of the Criminal Code of Ukraine“Now and then the flame dies down, but solidarity is a stream of sparks”2020: There was no worse year in the realm of human rights after the Revolution of DignityRussian-controlled militants sentence 70-year-old pensioner to 17 years for ‘spying’ after torturing him and his familyA brief description of the KHPG strategic litigations in July–December 2020Is COVID-19 present in penitentiaries and pre-trial detention centers?The childhood Russia ended in 2020 with machine guns and arrests Russia begins its most repressive trial of Crimean Tatar journalists and activistsCzech gets 15 years on terrorism charges for fighting for Russian-controlled Donbas militants
• Topics / The right to a fair trial 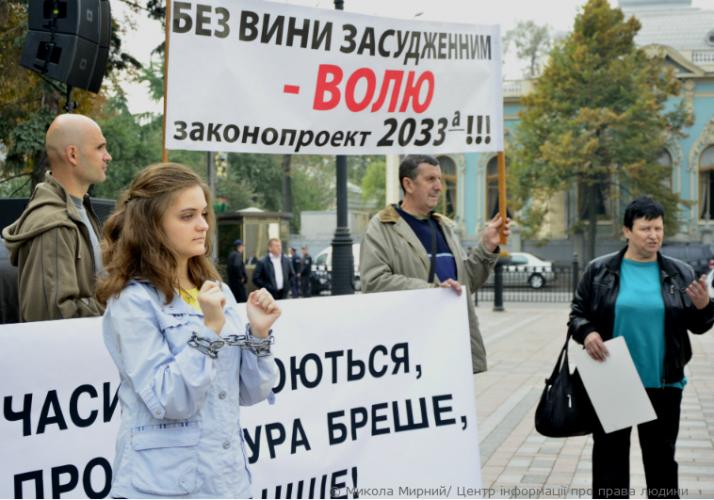 The unprecedented electoral support gained by both President Volodymyr Zelensky and his party has eliminated some of the most typical excuses used by all Ukraine’s previous governments to explain why multiple reforms remained on paper. Among urgently needed steps towards judicial reform is one that requires relatively little effort, only the will to give justice a chance.  That alone would translate into real hope for a number of prisoners in Ukraine whose life sentences are feared to have been the result of miscarriages of justice.

Ukraine’s most recent Code of Criminal Procedure, adopted in 2012, specifically prohibits the use in court of evidence which was obtained through torture, where the person was deprived of his right to a lawyer, etc.  That is the good news.  The downside is that people who were arrested and tried under the old version of the Code, could well have been convicted purely on the grounds of a ‘confession’ even if this was retracted in court.  This is of particular concern in the case of life prisoners since in Ukraine a life sentence really is until death.

Resistance seen over the past five years to measures aimed at giving such prisoners the chance of judicial review seems especially baffling since it was former President Viktor Yanukovych who removed the last possibility in 2010.  As part of his offensive against the Supreme Court which he was unable to bring under his control, Yanukovych had a law passed which deprived the Supreme Court of its right to review criminal cases under extraordinary procedure.  Such procedure had enabled review of a conviction in cases where there had been violations of material or procedural law, for example, where evidence had been fabricated or falsified. This has meant that people sentenced to life imprisonment under a criminal procedure code dating back to Soviet times cannot hope for a review of their case, unless it can be proven that new circumstances have arisen.  Since concerns about the likely use of torture or the lack of real evidence in many cases were expressed from the beginning, even these arguments cannot be termed new circumstances.

In order to right such judicial wrongs, Draft law No. 2033a was tabled back in 2015.  This offers life prisoners or others serving long sentences the chance of judicial review in clearly defined cases.  A person could apply for such a review if the only evidence against them had been from confessions or other testimony obtained through illegal means, for example, torture or some benefit gained from testifying against the defendant.  Review would also be possible if there were grounds for believing that the evidence had been falsified and / or where the court had rejected evidence proving the defendant’s innocence.  A further reason would be if the sentence did not seem proportionate to the case.

The scope of the bill is, thus, fairly modest and there is no suggestion of allowing blanket reviews of all sentences.  Importantly, the document was reviewed by two legal experts (Jeremy McBride and Eric Svanidze) from the Council of Europe’s Directorate General on Human Rights and Rule of Law.  They concluded that the aim of the amendments proposed, namely “an extraordinary review framework for addressing certain systemic and other serious deficiencies previously ingrained into Ukraine’s criminal justice system” was compatible with European standards.

They specifically noted that “the cases are ones involving widespread abuses that have been reported by human rights defenders and activists and illustrated by findings of violations of the right to fair trial in a number of the judgments by the European Court concerning Ukraine.”

Their assessment dates back to February 2017, over 18 months after the draft bill had first been tabled in parliament, and well over two years ago.  The bill never got beyond its first reading under the previous Verkhovna Rada.

Highly manipulative articles began appearing in the media which gravely distorted the nature and scope of the draft bill, and played on public fears about ‘maniacs and killers’ being released.  Among the details that the authors of such articles invariably chose to ignore were the specific criteria for judicial review and the fact that it was human rights groups that were calling for the bill’s adoption.

Back in June 2016, one of the authors of the bill Viktor Chumak accused the two main factions in the Verkhovna Rada – the Bloc of Petro Poroshenko [BPP] and the People’s Front – of blocking the bill under pressure from the Prosecutor General’s Office.  While the latter would certainly deny any such pressure, the prosecutor’s office is certainly one of the bodies who would face questions over any successful judicial review. The prosecutor’s office is in charge of criminal investigations and is supposed to ensure compliance with the law.  If a conviction ends up being overturned because the only ‘evidence’ was flimsy, fabricated or obtained under torture, then there will inevitably be questions raised about the police or investigators involved in obtaining such ‘evidence’; about the prosecutor and the judges who ignored its dodgy nature and / or the defendant’s own retraction and account of torture or pressure.

There should also be concern about high-ranking posts received despite open concern over a person’s role in one of the convictions.  In 2018, for example, Stanislav Holubytsky was appointed judge of the Supreme Council despite a negative assessment from the Public Integrity Council, based specifically on the life sentence he had passed on Volodymyr Panasenko,

This appointment was all the more astounding as the case of Panasenko stands out even among the many life sentences in Ukraine of concern.  Panasenko’s lawyer, Natalya Krisman has said that nobody, neither the investigators, nor the court, ever bothered to pretend that they believed in his guilt, it was just that all the others had power and influence, and the enforcement bodies needed to get a conviction. Ukraine’s first Human Rights Ombudsperson demanded justice for Panasenko back in 2009, yet 10 years later, he is still imprisoned, with all attempts to achieve a review of his case resulting in judges shrugging their shoulders and pointing to the “lack of mechanisms”.

One such mechanism has been gathering dust in parliament for over four years. With a new President, new parliament and Prosecutor General, there is nobody else to blame if Ukrainians are still denied their chance of justice.

Mykola Slyvotsky Life sentence for a crime somebody else admitted to