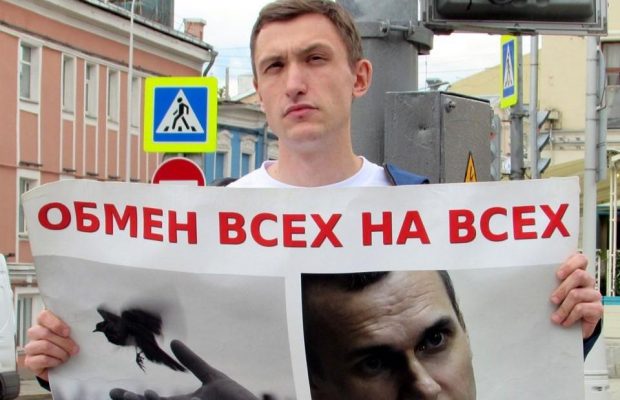 Konstantin Kotov, a 34-year-old computer programmer who has tirelessly supported Crimean Tatar and other Ukrainian victims of Russian persecution and protested against Russian aggression against Ukraine has been jailed under a notorious law which criminalizes peaceful protest

Kotov is the first Russian to have been remanded in custody on charges linked with the draconian anti-protest law, and this prison sentence flies in the face of a Constitutional Court judgement on application of this law.  That judgement came amid international outrage over the imprisonment of another Russian activist, Ildar Dadiin for totally peaceful protest, and his subsequent torture and added punishment for reporting torture in the prison.

It is vital that Kotov’s case receives the same attention in Ukraine and abroad, both because the same flawed legislation is being used to criminalize peaceful demonstrations, and because in both these cases, Russia has targeted men who have put themselves in danger in order to defend Ukrainians. Kotov was one of the activists in Moscow who helped deliver food, items of clothing, etc. to the 24 Ukrainian prisoners of war whom Russia seized during the attack on three Ukrainian naval boats near Crimea on 25 November 2018.  He responded just as selflessly when almost 50 Crimean Tatars were detained in Moscow for peacefully gathering, first on Red Square, then outside the Russian Supreme Court in support of four Crimean Tatar political prisoners. He has repeatedly stood for many hours in peaceful single-person pickets to protest against the persecution of particular Ukrainian political prisoners, such as filmmaker Oleh Sentsov and gravely ill student, Pavlo Hryb.

Kotov was arrested on 12 August on charges under Article 212.1 of the Russian Criminal Code, introduced in July 2014.  This envisages a sentence of up to 5 years if a court has issued three rulings on administrative offences within 180 days.  Under the present regime in Russia and Russian-occupied Crimea, it is standard to be detained and prosecuted for purported ‘infringement of the rules for holding a public event’ without any grounds whatsoever.  This includes even situations where the person was holding a single-person picket although this is supposed to be the only remaining legal form of peaceful protest.  This was the first such arrest since Dadin’s release in February 2017 and seems to be part of an aggressive drive to crush peaceful protest in Russia.

Russia’s Supreme Court revoked the sentence against Dadin in February 2017, with the Constitutional Court issuing a judgement on Article 212.1 around the same time The latter stated that criminal liability for infringements at public events should be commensurate with the danger to the public of the actions.  Criminal liability should not be applied in cases where the infringements were merely formal and caused no harm.  A court needed also to establish the person’s intent to infringe established procedure for organizing or holding a public event.

If the Russian regime appeared to have backed off its effective criminalization of peaceful protest, that has now changed. According to OVD.info, Kotov is the third person to be charged under Article 212.1 over the last year, although the first to be remanded in custody.

The ‘episodes’ in Kotov’s case were:  a protest on 2 March in support for arrested student Azat Miftakhov; his detention and 5 day arrest on 13 May after a meeting in defence of political prisoners) outside the FSB buildings on Lubyanka; his detention and fine on 12 June at a protest in support of Meduza journalist Ivan Golunov.  He was then prosecuted for merely posting a call on Facebook to come out in protest at the Moscow authorities’ blocking of real opposition candidates for the coming city council ‘elections’.  He was detained on 24 July as he left his apartment block, and arrested for 10 days, and then again on 10 August after a protest on Sakharov Avenue.

The prosecution is clearly trying to get around the Constitutional Court judgement by producing highly questionable assertions about Kotov’s behaviour from law enforcement officers.

On 4 September, for example, police officer Nikolai Kurazh claimed that, while being detained in March, Kotov had tried to dig his feet in and shouted.  He further asserted that they had had to detain Kotov as he was preventing Chinese tourists from taking photographs of themselves in front of the monument.  Kotov’s lawyer asked for permission to show a video of the protest, saying that there were no Chinese tourists to be seen.  This was clearly important given the officer’s claim, yet the judge refused permission.

On 4 September, the public prosecutor Yaroslav Myts claimed that Kotov’s ‘guilt’ had been proven, and demanded a 4.5 year sentence.  The detailed reports by a correspondent from Mediazona who was attending the hearings had given no grounds for believing that judge Stanislav Minin would be unwilling to convict Kotov on criminal charges and imprison him for entirely peaceful acts of protest and on 5 September he passed a four-year sentence.

It is almost certainly no coincidence that the two men so far imprisoned under this shockingly cynical anti-protest law have both actively – but always peacefully – protested against Russia’s persecution of Ukrainians and its military aggression.  Their acts of solidarity with Crimean Tatar and other Ukrainian political prisoners have been hugely important both for moral support, and in publicizing the prisoners’ cases.  Kostya Kotov now needs our solidarity – please help by ensuring maximum publicity for his persecution.