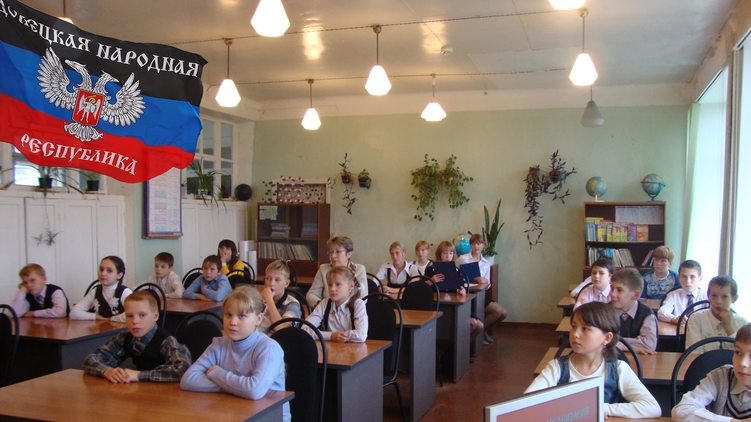 Although Russia repeatedly claims that Russian speakers were under threat in Crimea and Donbas, it is the Ukrainian language that has come under attack as soon as Russia took actual or effective control, as well as Ukrainian history and culture.  In the self-proclaimed Donetsk and Luhansk ‘republics’ [DPR, LPR], there are no Ukrainian classes anymore, with the Ukrainian language taught as a subject for one hour a week.  This is very clearly a ‘Russification’ program, with the textbooks for schools being brought into occupied Donbas by the so-called ‘humanitarian’ convoys from Russia.

The official line taken in both occupied Crimea and Donbas is identical: supply has not been terminated, it’s just that those demanding Ukrainian has radically decreased.  During the preliminary hearings into Ukraine’s case against Russia at the UN’s International Court of Justice in March 2017, Russia tried to counter Ukraine’s accusation of discrimination against ethnic Ukrainians and Crimean Tatars by, among other things, citing the fact that Russian, Ukrainian and Crimean Tatar are all officially state languages.  The Court was unconvinced, and ordered Russia to ensure availability of education in the Ukrainian language.  This is just one of the orders it has flouted to the present day. .

In an important study published on 2 September 2019, Dmitry Durnev explains that the self-proclaimed Donbas ‘republics’ have also stated in their so-called constitutions that Ukrainian is the second ‘state language’, after Russian.  In fact, however, no official proceedings are carried out in Ukrainian and all Ukrainian schools and classes are now in the Russian language, after a transitional phase from 2014 to 2016.

Durnev spoke with several teachers, including some who are currently teaching in Donbas schools.  All agreed to speak with him only on strict condition that their names were concealed, and voices on recordings distorted.  Judging by cases of persecution that human rights groups are aware of, it seems quite likely that objecting to the lack of Ukrainian in schools could easily result in a person being ‘arrested’ and incarcerated on charges of ‘collaborating with the Ukrainian SBU’ or similar. There are very likely many people who are unhappy about the situation, but worried of being ‘denounced’ to the militants’ so-called ‘ministry of state security’ if they speak out.