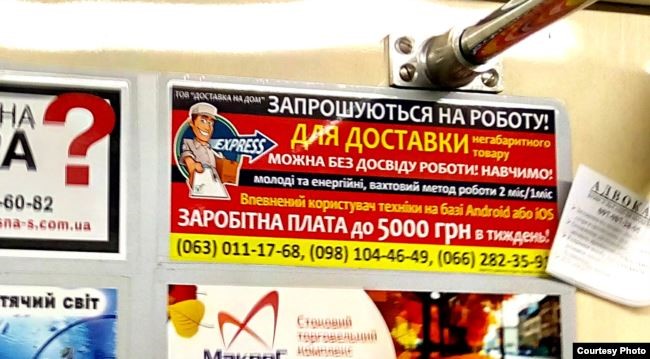 Between two and three thousand Ukrainians have ended up jailed in Russia since 2015 on drugs charges after being tricked by advertisements promising legal employment as couriers.  While very many such human trafficking victims are still stuck in Russian prisons, Vitaly Moskalenko, Ukrainian consul in Rostov-on-Don, reported back in 2017 that at least some have been pressured or simply forced to fight against Ukraine in Donbas or in Syria.

After human rights groups first sounded the alarm back in 2016, the advertisements pasted all over major Ukrainian cities largely disappeared.  A very small number of people have also been prosecuted on human rights charges.  This, however, has not helped the majority of prisoners sentenced by Russian courts to between 6 and 19 years’ imprisonment on drug trafficking charges.  Ukraine acknowledges that the men were victims of human trafficking rackets,  but has not found a legal mechanism for obtaining their release, and Russia simply treats them as drug traffickers. .

Human trafficking scams always target people in financial difficulty or unable to find work at home, who are, unfortunately, duped by the offers of good wages in Russia.  In this case, it is young men between 20 and 30 who find, instead of the work and wages offered,  that they are expected to deliver illegal drugs, and face threats of reprisals, including arrest on drugs charges if they refuse.  The people Moskalenko was aware of had had their passports taken away from them after they arrived in Moscow.  They were given a small amount of money and sent to other cities, purportedly to deliver their first parcel, and then seized immediately, with drugs found in the packages they were supposed to deliver.

Moskalenko was convinced that this was being done to do damage to Ukraine, to force people to work against their own country.  Maria Tomak, one of the rights activists who first alerted people to such scams, agrees that the Russian media use reports of mass arrests of Ukrainians for propaganda purposes.  The media and law enforcement bodies present this as being about Ukrainians bringing drugs to harm Russians.  Any such apparently criminal arrests also serve to obscure the picture about at least 87 Ukrainian political prisoners held in Russia and occupied Crimea.  Russia is also using such Ukrainian human trafficking victims, forced or blackmailing into going to Donbas, as pawns in its information war (“See, these are Ukrainians and this is not Russian aggression, but a Ukrainian civil war”).

Human rights groups believe that there are at least 10 people in virtually all Russian SIZO [remand prisons] or prisons.  Most are prosecuted under Article 228 of Russia’s criminal code (on illegal sale of drugs), carrying a sentence from 3 to 15 years, however some are charged under Article 210 (creating a criminal organization), with a potential 20-year sentence.

Although it is not guaranteed that all those serving such sentences are victims of human trafficking, this is almost certainly so in very many cases.  In each such case, it is vital to establish what happened, and whether the person did consciously take part in a crime or whether he did so when left essentially with no choice.

Dmytro Mazurok is one of the lawyers from the Kharkiv Human Rights Group who are offering help to people who have fallen victims of such scams.  He estimates that around 3,000 Ukrainians have fallen victim to such ruses.

Human rights groups have long demanded that all of those who were indeed victims of human trafficking scams be declared victims. This will mean that they fall under both Ukrainian and international programs of protection. Even for those who have been recognized as victims, however, it is still a major battle to get them returned to Ukraine.