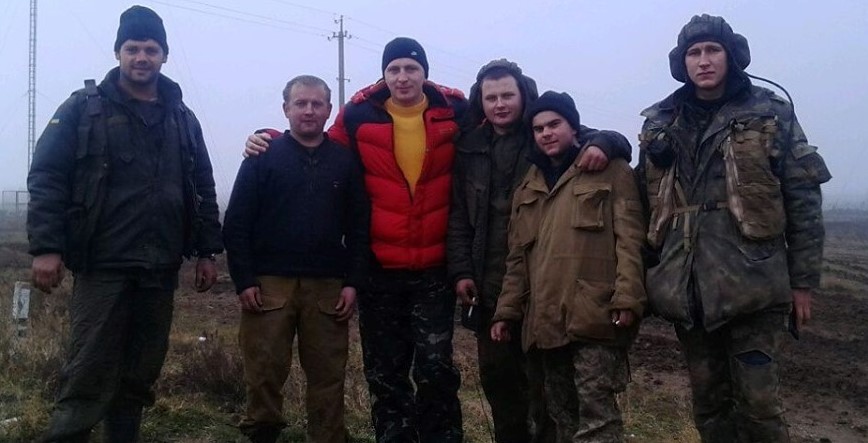 Details have emerged of yet another Ukrainian whose imprisonment in Russia and horrifically long sentence are very likely politically motivated.   Volodymyr Yakymenko was active during the Euromaidan protests (in ‘Automaidan’) and later worked as a volunteer, helping Ukraine’s Armed Forces.  For these reasons alone, he should have avoided Russian-occupied Crimea, and has paid a heavy price for ignoring the danger.

According to his wife, Olena Yakymenko, Volodymyr was working as a taxi driver and had crossed the administrative border between mainland Ukraine and occupied Crimea many times.  Why he was stopped and taken prisoner specifically on 11 June 2017 is hard to say, but he has been imprisoned ever since.  Something does appear to have been found in the car which Olena Yakymenko says was left by the man whom she suspects of having set up her husband.  The FSB do not appear to have shown any interest in this person, although Yakymenko, as a taxi driver, obviously had a passenger. They concentrated solely on the ‘confession’ which his wife says was obtained through torture.

Speaking on the Hromadske.Radio program on political prisoners,  Olena Yakymenko explained that her husband had earlier helped both the Ukrainian Army and Crimeans forced to flee to mainland Ukraine after Russia’s invasion and annexation of Crimea in early 2014.  He had even reserved an award in gratitude for his volunteer work.

In 2017, the family was living in Chaplynka which is directly on the administrative border with Crimea, so it could have seemed logical for much of Yakymenko’s work as a taxi driver to involve crossing into Crimea.

It had been clear for some time that Maidan activists and people known to be actively supporting the Ukrainian Army were in particular danger in occupied Crimea or Russia.  His wife says that Yakymenko had actively shared photos in social media where he was with military servicemen or people from Ukraine’s Verkhovna Rada [parliament].

Olena Yakymenko is adamant that there were no grounds for any charges against her husband.  She assumes that drugs were used as the pretext since this enabled a huge sentence.

She says that for the first three days after his seizure by the FSB, he was subjected to torture  aimed at forcing out a ‘confession’ and getting him to collaborate with the FSB.  He was tortured until he was ready to sign any ‘confession’, but rejected any collaboration which only led to further torture.  During this period, the techniques included asphyxiation, when they put a gas mask on you and then stop the flow of air.

Yakymenko was also tortured after the ‘trial’, as well as during the gruelling journey to the prison in Saratov oblast where he is now held.

Olena says that her husband was also forced to sign a document claiming that he had had an epileptic attack and had “fallen from a chair and had hit his face on the table”.  This was clearly because the marks from the beatings he was received could not be concealed.

The questions he was asked during these interrogation / torture sessions make it clear that the FSB knew about Yakymenko’s voluntary activities.  They demanded that he tell them about the Ukrainian military and people in power whom he was photographed with on Facebook, and that he tell them about the positioning of the Ukrainian Armed Forces on the border with Crimea.  They wanted the telephone numbers of certain people.

Yakymenko was seized while taking a person whom he had driven on other occasions.  Since this individual left the car before the checkpoints, arranging to meet Yakymenko later,  Olena suspects that he was involved in setting up her husband.  It certainly seems clear that Yakymenko was set up, although we can only guess what the man’s motives were.  There appears no doubt that the FSB knew who Yakymenko was, and used torture to both get him a horrifically long 15.5 year sentence and to extract information that had nothing to do with the criminal charges.

Yakymenko does not have a lawyer now, and it is likely that he only had a state-appointed person during the time up to and during the ‘trial’.  That lawyer’s advice to Yakymenko, it seems, was to “make certain concessions in order to get a lower sentence”.  Such lawyers typically suggest ‘confessing’, claiming that this will get them a reduction in the sentence, so this certainly was not the case here.

His wife has been left bringing up their two children, with her circumstances made particularly difficult since their daughter suffers from chronic kidney disease.  She was not allowed to see her husband while he was in Crimean detention, and he is now thousands of kilometres away.  The cost is prohibitive and she has only been able to visit him once, in June this year.

An application has been registered with the European Court of Human Rights, but that can take years.  For the moment, Olena is hoping that her husband can be included in the next list of prisoners for exchange.