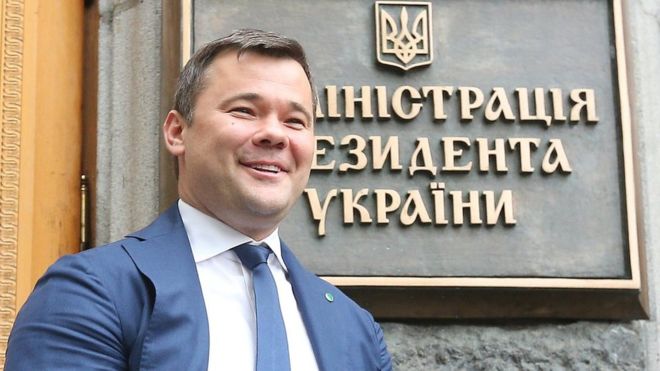 Andriy Bohdan, Head of Ukrainian President Volodymyr Zelensky’s Administration, reportedly took part in the negotiations in Russia which resulted in Ukraine’s sudden about-turn on closer ties with the EU and, ultimately, to the Euromaidan protests, now known as the Revolution of Dignity. There is, in principle, nothing surprising in the news which Skhemy anti-corruption journalists have dug up, but the optics are terrible, and only highlight the problem posed by Bohdan’s recent past and his position in Zelensky’s administration.

42-year-old Bohdan twice served as government representative on ‘anti-corruption policy’ during the presidency of Viktor Yanukovych.  He was first appointed to that post and designated Deputy Minister of the Cabinet of Ministers by Prime Minister Mykola Azarov shortly after the legally dubious takeover of government by the Party of the Regions following Yanukovych’s election.  After reappointment in July 2013, he held the post until after Yanukovych and his people fled to Russia in February 2014.

It is because of these posts that Bohdan is prohibited under the 2014 Law on Cleaning up Government (the lustration law) from holding public office for 10 years. Efforts by Bohdan himself to claim that the post of head of the President’s Administration did not fall under this law were swiftly refuted, after which Zelensky effectively resorted to a fiddle.  Since Article 2.5 of the Law begins with the post of Head of the Presidential Administration, he changed the name of his administration to ‘Office of the President’, with Bohdan’s post as head of this ‘office’ purportedly not falling under the scope of the law.

Although the lustration law has been widely criticised for its failings, there was considerable support for a law aimed at ensuring that people seen as being compromised by their role in the extremely corrupt Yanukovych administration and / or in opposing the Maidan protests did not hold similar positions in post-Maidan Ukraine.

It has now transpired that Bohdan travelled in the delegation led by Azarov that carried out negotiations in Russia the day before Azarov suddenly announced suspension of plans for signing the EU-Ukraine Association Agreement.  Bohdan’s inclusion in the delegation is confirmed by Russian data regarding individuals crossing the border into Russia, as well as by details of the delegation makeup received from Ukraine’s Cabinet of Ministers in response to an information request.

There is nothing to indicate that Bohdan played a major role in these negotiations, however there is also nothing to suggest that he was in any way against them, and he is refusing to speak with the Skhemy journalists.

The directive issued on 21 November 2013 by Azarov’s government suspended preparation for the signing of the Association Agreement, and spoke instead of closer ties with the Russian ‘Customs Union’.  By that evening people had begun gathering on Maidan Nezalezhnosti [Independence Square] in Kyiv with the Maidan protests turning into a truly mass movement after the savage attack by Berkut officers on young students on Maidan in the early hours of 30 November.

Throughout all of the attempts to crush the protests, the passing of the ‘dictatorship laws’ on 16 January and the deaths of peaceful activists, Bohdan did not resign from his government post.  There is also nothing to suggest that he ever protested against the repressive and illegal measures against protesters.  Quite the contrary since the Skhemy team have found an application from 23 December 2013 indicating that Azarov handed Bohdan a Cabinet of Ministers achievement award, the highest honour issued by the Cabinet of Ministers.  The award was “for carrying out preventative anti-corruption measures and creating the conditions of intolerance for and forming a negative attitude to corruption”, with this reflected in his “preparation of reference material for the Prime Minister”.

Skhemy spoke with Kristina Berdynskykh from the journal New Times which recently issued a list of influential Ukrainians.  According to their estimate, Bohdan wields more influence than two of Ukraine’s richest oligarchs – Ihor Kolomoiski and Rinat Akhmetov.  Berdynskykh says that Ukraine has never had such a self-confident Head of the President’s Administration (or ‘Office’) who doesn’t seem to understand that it is Zelensky who is President, and not him.  The difference is that it is Zelensky who has the media presence and is therefore the person who gets noticed.  This, of course, has advantages for a person occupying a post, albeit under a changed name, that the law prohibits him from holding.

A decision by the Constitutional Court as to whether the lustration law is constitutional is still awaited almost five years after the law came into effect.  There had, in fact, been some suggestion that a session of the Court, scheduled for 18 April 2019 was due to discuss the law and, possibly, issue a judgement.  The session was cancelled at the last minute, possibly in the wake of undesirable publicity following an earlier Skhemy report on a “secret meeting” between “an ally of Zelensky [then the front-runner in the presidential race] who falls under the lustration law and the President of the Constitutional Court which may cancel it”.