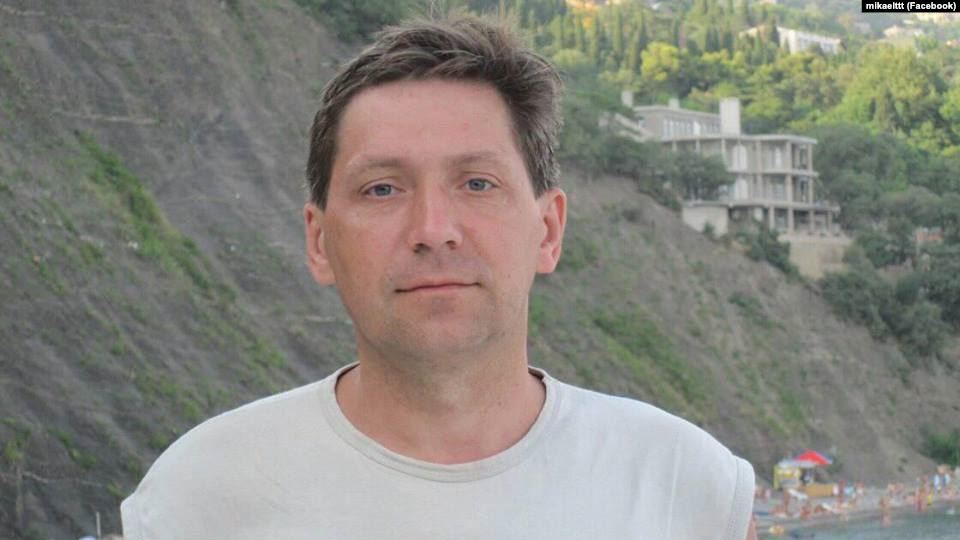 Oleksandr Timofeyev has been ‘sentenced’ by the self-proclaimed and Russian-controlled ‘Donetsk people’s republic’ [DPR] to 14 years’ imprisonment.  The ‘charges’ against him were fluid, as was the huge amount of ransom that the militants tried to extract from his wife, Svitlana.   It is now vital that he is included in the list of  prisoners to be exchanged, though his wife is encountering baffling obstacles to this.

The Timofeyev family is from Donetsk.  The couple’s son left for Kyiv after Donetsk was taken over by the Russian and Russian-controlled militants in 2014.  Oleksandr and Svitlana left in early 2015, however often returned to visit and bring supplies to Svitlana’s 80-year-old mother who is paralysed and whom they could not take with them straight away.

It was on one of their trips to visit the elderly lady that  on 26 December 2017, they were stopped at the checkpoint.  Men from the so-called ‘DPR ministry of state security’ claimed that Timofeyev was suspect of some crime. They were taken to their flat which was searched, before Timofeyev was taken away, without any indication as to where.

Svitlana received two phone calls demanding money, if she wanted to see her husband alive.  The first call was on 31 December 2017, with 20 thousand USD demanded   She did not have that sort of money, and contacted the ‘DPR police’.  She received a new call in 2019, this time demanding 30 thousand.  Money was also taken out of Timofeyev’s bank cards.  His wife has since asked the SBU to identify both the owners of the phones used to ring her and the movement of money from Timofeyev’s account.

A month after Timofeyev was seized, the ‘ministry of state security’ announced that he had “been arrested for 30 days for an administrative offence”.  Later they came up with the spying charges, with two photos from 15 Une 2014 found on his laptop cited as ‘proof’.  These showed two extremely drunk militants in camouflage gear, with one of them dragging the other after he’s fallen in one photo.  These photos purportedly justify the 14-year ‘sentence’ by the DPR’s self-styled ‘supreme court’ for espionage.  It was claimed that Timofeyev had worked for the SBU [Ukraine’s Security Service], by taking photos to provide “information of a military nature about the places where military units are deployed and about the movement of military technology of the DPR ‘people’s militia’.”

Timofeyev was brought home once for a so-called ‘investigative experiment’.  Svitlana says that at first she scarcely recognized her husband, he had lost so much weight and his eyes darted about, not looking directly at her.  They were, however, given a moment together, and he had time to embrace her and tell her, most ominously, that he was being held at ‘Izolyazia’.  This former factory, turned cultural centre, which the militants seized in 2014, is called by many former hostages “a concentration camp”.  Since this is a secret prison whose very existence the Russian-controlled ‘DPR’ denies,  there is no access even to Red Cross monitors, and no way of ascertaining the condition of people held there.

Svitlana Timofeyea was summoned to the ‘DPR ministry’ on 23 February 2017.  When they started asking her about the couple’s son who is living in Kyiv, she understood that she needed to leave Donetsk immediately with her mother.

Timofeyev had only a ‘lawyer’ provided by the ‘ministry’, and rejected the latter’s services during the ‘trial’.  He refused to ‘cooperate’ with the ‘investigators’ and admit to the spying charges.  During the so-called ‘trial’, he also complained of the torture used to extract testimony.  This was ignored, as were other violations of his right to a fair trial, with the original ‘guilty’ verdict and 14-year sentence from 2 August 2019 confirmed on 25 September by the so-called supreme court of a ‘republic’ not recognized by any democratic country.

It is not clear when he was moved to the SIZO [remand prison], but a parcel which Svitlana sent was recently accepted there, so for the moment he has not been moved.  The ‘sentence’ itself is for imprisonment in a maximum security prison.

It is extremely worrying that, despite Svitlana’s efforts, and her husband’s hepatitis C, he has not been added to the exchange list.  She has been told that the Ukrainian delegation has given Timofeyev’s name, but that there has been no response from the other side.  She is, however, sceptical, as she has written numerous appeals to the DPR ‘authorities’ and they keep telling her that it is the Ukrainian government that has not sought to have him included in the list. After almost two years of trying to secure her husband’s release, she is understandably bitter that even this cannot be resolved and that even the Ukrainian Human Rights Ombudsperson, Lyudmila Denisova has not found time to see her.