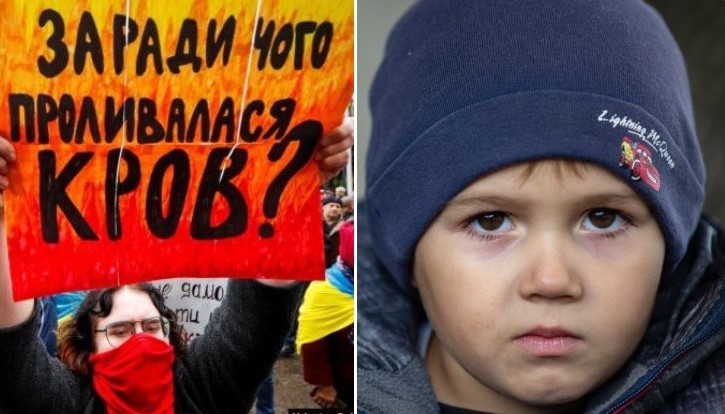 Residents of Zolote-4 have sent a desperate plea to President Volodymyr Zelensky asking him to halt the planned withdrawal of Ukrainian forces from their town in the Luhansk oblast.  Their letter coincides with claims from Russia that it is not a party to the conflict and cannot guarantee the withdrawal of the Russian and Russian-controlled, armed and financed militants.  The withdrawal of Ukrainian troops from  Petrivske in Donetsk oblast and Zolote in Luhansk oblast had been scheduled for 7 October, but was halted because of ongoing shelling.

The plea from residents, published on 7 October, has been signed by 50 of the roughly 500 residents of Zolote-4, and signatures are still being gathered. The residents say that they are turning to the President as guarantor of Ukraine’s Constitution “demanding that he immediately halt the withdrawal of units of the Ukrainian Armed Forces from military positions held up till today.

We consider such actions to be capitulation.  Practice has shown that the withdrawal of UAF units has only led to a worsening of the situation for local residents, with their homes turning into ‘a grey zone’ where human life is worth nothing. The Ukrainian Armed Forces are the guarantee of our safety”.

As a post-scriptum, the authors write that the residents of neighbouring Katerynivka also want the Ukrainian Armed Forces to remain.  Most of the 248 residents are elderly, though there are also 14 children.

Zelensky announced this new withdrawal of Ukrainian forces during a highly controversial press briefing on 1 October at which he also informed that Ukraine had agreed to the so-called Steinmeier formula.  This envisages that ‘special status’ for the self-proclaimed and Russian-controlled ‘Donetsk and Luhansk people’s republics’ will be agreed after local elections have been held in accordance with Ukrainian legislation and OSCE standards. There is, at present, no possibility that any elections held in occupied Donbas could be in accordance with Ukraine’s Constitution and laws.  This is due to the number of Ukrainians whose life or liberty would be in danger if they returned to vote, the severe censorship and military control over residents, to name just a few factors.

Zelensky has assured Ukrainians that such elections must be free and fair, will not take place at gunpoint, nor until the border is back under Ukrainian control.  The problem, however, is that Zelensky has not specified how the withdrawal of all Russian forces, nor the re-establishment of control by Ukraine of its border with Russia would be verified. Nor is it clear what the new draft law to be drawn up and adopted will entail.  Concern seems warranted since Oleh Didenko, the new head of a totally changed Central Election Commission has basically claimed that the whole question of elections in the so-called ‘republics’ lies with the politicians due to adopt a law on these elections.  Since Zelensky’s party, Servant of the People, has an absolute majority in the Verkhovna Rada, there is concern about the level of protection for electoral rights of all Ukrainians that such a bill will guarantee.

The above are some of the reasons why there have been huge demonstrations throughout Ukraine over the last week, with tens of thousands of Ukrainians gathering at Maidan Nezalezhnosti [Independence Square] in Kyiv on 6 October.   The banners read: “No capitulation!’ and “What was the bloodshed for/”.  These were mass demonstrations, the largest by far since Euromaidan (the Revolution of Dignity).  The attempt by Andriy Bohdan, the highly contentious head of Zelensky’s administration to claim that people were paid to demonstrate was chillingly reminiscent of the arguments heard by the regime of former President Viktor Yanukovych and only strengthened concerns at Bohdan’s continuing position which is illegal according to the law on lustration.

In a second address on 3 October, Zelensky made much of the apparent need for a meeting of the Normandy four (with the leaders of Russia, France and Germany).  Many commentators who believe Zelensky’s move to have helped only the Kremlin, such as Andrei Piontkowski, have expressed scepticism about the supposed importance of such a meeting, and certainly the official position expressed on 7 October can only exacerbate the doubts.

The statement on Monday came from Putin’s press secretary, Dmitry Peskov.  He claimed that the Kremlin “is not a party to the conflict” and cannot guarantee the withdrawal of armed formations in Donbas.  In words quoted by TASS, he spoke of the war as being a “Ukrainian conflict” and acknowledged only that the Kremlin “as certain influence on the Donbas republics”.  He asserted, however, that they are “autonomous subjects in the regulation of this conflict”.

It appears that the leading militants are unaware of this.  Alexander Borodai, one of the first Russian leaders of ‘DPR’ recently admitted that he and his fellow militants would be dead were it not for “the help” provided by Putin and that the ‘republics’ now exist because of Russian support.  Alexander Zhuchkovsky, another Russian, with neo-Nazi views and a wish to destroy Ukrainians, has acknowledged the same.

This active military engagement was not especially concealed, at least not to those who wished to record it. Such engagement included the transportation to Ukraine of the BUK missile launcher used to down Malaysian airliner MH17 on 17 July 2014.

Nor are there any grounds for believing that the supplies of men, military equipment and ammunition have stopped, as the repeated sightings by OSCE drones of military trucks travelling by night on dirt tracks near uncontrolled parts of the border confirm (see: Russia brings ‘humanitarian’ convoys to Ukraine by day, military trucks carrying death by night ).