Majority of Ukrainians against ‘special status’ for occupied Donbas 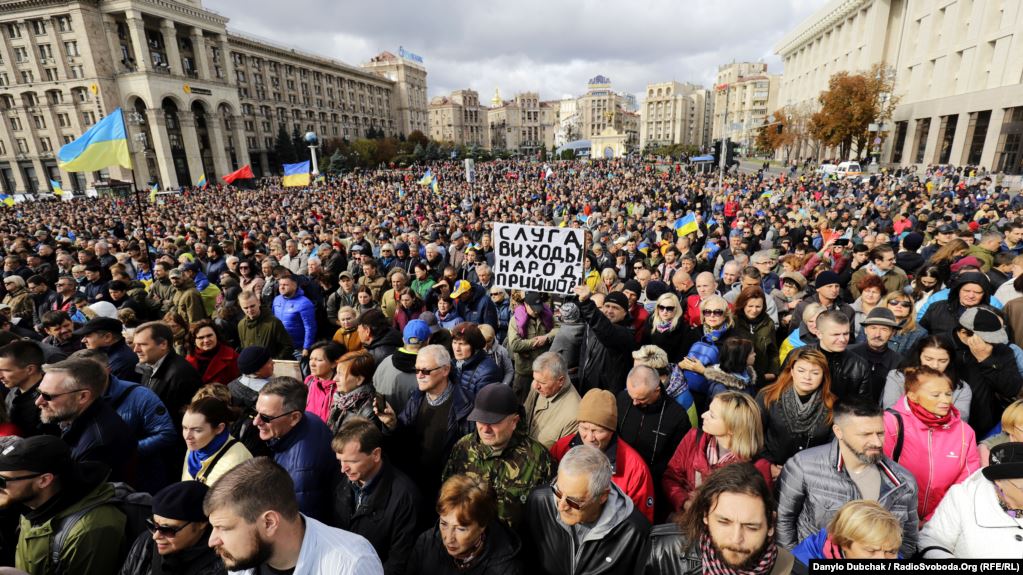 56% of Ukrainians are against the ‘special status’ for Donbas that is a pivotal element of both the Minsk Accord and the Steinmeier formula which Ukraine agreed to on 1 October 2019.  Over two-thirds of Ukrainians would be against any deal in which Ukraine would essentially hand over Crimea (recognizing it as ‘Russian’) in exchange for liberation of the occupied areas of Donbas.  The survey by the authoritative Razumkov Centre is not representative of all Ukrainians, since it could not be carried out in occupied Crimea and Donbas, but it does confirm the warnings from many analysts that Ukrainians want peace, but not at any price.

The survey was carried out from 4 to 9 October, thus immediately after Ukrainian President Volodymyr Zelensky announced that Ukraine had agreed to remove Ukrainian forces from Petrivske in Donetsk oblast and Zolote in Luhansk oblast, and to the Steinmeier formula regarding local elections in the self-proclaimed ‘Donetsk and Luhansk people’s republics’ [DPR, LPR] and recognition of these Russian-controlled ‘republics’ of their ‘special status’ if the elections were in accordance with Ukrainian law and recognized by the OSCE.  The announcement prompted huge protests throughout Ukraine, and residents of at least one of the areas facing ‘disengagement’ publicly appealed to the Ukrainian forces to remain.

The Razumkov Centre asked respondents how they envisage the political future of the territory now called DPR and LPR.  An absolute majority (56%) wish to see them reinstated within the Donetsk and Luhansk oblasts on the same conditions as before 2014. A further 13.5% want them to return to Ukrainian control, but with greater independence from Kyiv.  10% would like them to form an autonomous region, within Ukraine.  3% said that the territory should secede from Ukraine and form independent states, while another 3% said that they should secede and join Russia.  There does not appear to have been any option for ascertaining why people gave the answers that they did.

In the question about steps towards establishing peace in Donbas, only 26.3% said that they would support giving the areas ‘special status’ in the Constitution, with 56.2%, on the contrary, opposed.  Another idea strongly pushed by Russia, namely the introduction of a federal system in Ukraine, received even less support, with 63% against and only 17% in support.  Although the percentage supporting the Russian language becoming a second state language was higher (29.5%), this was still much lower than the 58% who were against.

Only 23.5% supported establishing peace in Donbas by force, with this opposed by 52%.  One unexpected result was that slightly more respondents expressed willingness to accept negotiations between the Ukrainian authorities and the ‘leadership’ of DPR/LPR (41.5%) than rejection of such negotiations (39%).  Respondents were more divided also with respect to whether Ukrainian should cease any financing of the occupied territory (44% were against stopping such funding, against 33%).

A huge majority (71%) rejected the suggestion of recognizing Crimea as ‘Russian’ in exchange for the liberation of Donbas, with only 9.8% viewing this as acceptable.

The respondents were also asked to say which of several assertions reflected their view regarding the nature of the conflict in Donbas, with each person asked to choose one.  40% see it as a conflict between Ukraine and Russia, while a further 20% called it a separatist uprising, supported by Russia, and 7% - a war between the USA and Russia.  15% said they considered the conflict to be a civil war between pro-Ukrainian and pro-Russian Ukrainian citizens.  7% said that those in DPR/LPR are fighting for the independence of these supposed ‘republics’.   The others didn’t know.

Over another highly problematical issue, 59% were against giving an amnesty to all of those who took part in the fighting in Donbas, while only 18.4 supported this in the context of ways towards achieving peace.

The results of this survey suggest that it would be unwise to assume that weariness over the ongoing conflict has made Ukrainians more inclined to compromise certainly positions.  Analysts from the Democratic Initiatives Foundation have also confirmed that their surveys consistently find that there are prices for an end to the conflict that an absolute majority of Ukrainians find unacceptable.

While the percentages would likely be different if people from Crimea and Donbas were able to be included, but the assumption that there was ever majority support for joining Russia is not borne out by public surveys.

The last survey into Ukrainian attitudes to Russia, covering the entire country, came just days before Russia’s invasion of Crimea.  It was carried out by the Democratic Initiatives Foundation and the Kyiv International Institute of Sociology from 8 to 18 February 2014, with the results compared to those of a survey into Russian attitudes to Ukraine obtained by the Levada Centre in Russia.

12% of respondents throughout all parts of Ukraine wanted to form a single country with Russia.  This had fallen over recent years from 20%, but increased by 3% in connection with Euromaidan.  The figures were undoubtedly higher in Crimea (41%); the Donetsk oblast (33%) and the Luhansk oblast (24%), but still far from an absolute majority.

A poll on Ukrainians’ attitude to the status of Crimea and to whether Ukraine should remain a unitarian country was carried out by the Rating [«Рейтинг»] Sociological Group from 1-7 March 2014.  In direct contradiction of the position consistently taken by Moscow, 61% of all Ukrainians wanted a unitarian state, with this having risen from 50% in 2011.  Only 24% of all Ukrainians supported a federal system, although there was majority (59%) support for this in Donbas.

Most importantly, only 5% of Ukrainians (including respondents in Crimea) thought that Crimea should be separate, or handed over to Russia, with a large majority (77%) believing it should retain autonomous status within Ukraine.  87% of the respondents were against Donbas seceding from Ukraine (with 9% in favour).