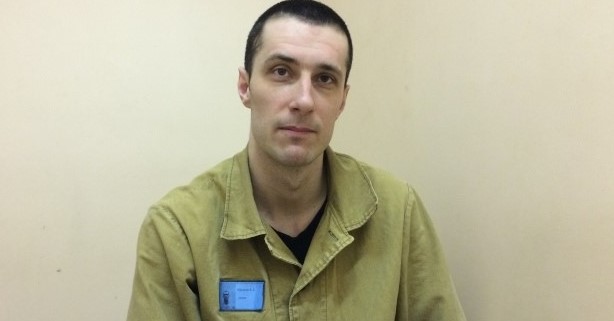 Oleksandr Shumkov has been on hunger strike in Russian captivity since 14 October.  He began it, demanding “an end to blackmail using us prisoners at negotiations in Minsk and the Normandy format”, and also that the Russian Human Rights Ombudsperson Tatyana Moskalkova finally react to his letters and those from her  Ukrainian counterpart, Ludmila Denisova.

In the letter to his aunt, in which he explained about the hunger strike, Shumkov expressed anger that Russia “is blackmailing our people, linking the question of prisoners exchanges with the withdrawal of forces and introduction of amendments to Ukraine’s Constitution.  That is, they’re using us, our life as a level to put pressure on Ukraine to make the concessions they want.”  He expressed the hope that other Ukrainian political prisoners in Russian prisoners would hear of this and support him.  In fact, most of the prisoners are deliberately held in an information vacuum, and often isolated from others, so the chances of them hearing are very small.

Shumkov’s lawyer, Alexei Baranovsky reported on 25 October that he had visited the Ukrainian in the prison hospital in Torzhok, Tver oblast to where Shumkov was moved on 22 October.. He notes that it is not clear how long Shumkov will remain in the hospital, nor where he will be sent afterwards, since he was moved to the hospital together with all his things.  Baranovsky adds that it is possible that Shumkov will end the hunger strike since there have been some constructive moves with regard to the prison authorities and the Russian Ombudsperson.

Shumkov is most often described as a former guard to Dmytro Yarosh, the ex-leader of Right Sector, one of the Ukrainian political organizations which Russia has most demonized since early 2014.  It is very likely that the Russian FSB abducted him and charged him with involvement in Right Sector because of the link with Yarosh, however that link and, in fact, Shumkov’s membership of Right Sector,  had ended long before Russia formally outlawed Right Sector in November 2014.  This was only one of many reasons why Russia’s treatment of Shumkov has been openly lawless.

Shumkov was seemingly abducted in late August 2017 from the Kherson oblast and taken by force to Russia.  He had been serving in the Ukrainian Armed Forces since 2014 and, since he is a lawyer by profession, had been working as an investigator for the military prosecutor of the Kherson Garrison.  It is believed that he set off for a meeting with an informer who was supposed to provide information about supplies of drugs smuggled from the Kremlin-backed ‘republics’ in Donbas to government-controlled oblasts.  The car in which he was driving came under attack near the Russian-Ukrainian border, with a laser gun used against Shumkov, who was taken, unconscious, across the border into Russia.

Although there remain unanswered questions about how Shumkov came to be in Russia, it seems inconceivable that he would have crossed voluntarily into Russia.  The very fact that the young man had taken part in Euromaidan placed him in danger, not to mention his past role in Right Sector and more recent position in the Armed Forces.  He must have been aware of the real risk of imprisonment or worse in Russia or Russian-occupied territory.

He was charged under Article 282.2 § 2 of Russia’s criminal code with taking part in Right Sector in Ukraine, this being deemed to be ‘involvement in an extremist organization which has been banned by a [Russian] court’ . The report from Russia’s Investigative Committee did not mention that these ‘extremism’ charges were in connection with activities on Ukrainian, not Russian, territory which were in no way illegal in Ukraine.

The Bryansk Oblast Investigative Committee and the courts were equally unperturbed by hard evidence that  Shumkov had left Right Sector a couple of months before the Russian court ruling in November 2014 that declared Right Sector illegal.

On 4 December, 2018, Shumkov was sentenced by Viktor Rukhmakov, from the Sevsk District Court in the Bryansk oblast to four years’ imprisonment in a medium security prison.

The authoritative Memorial Human Rights Centre has recognized Shumkov as a political prisoner both because of his almost certain abduction and because of the legal nihilism of the charges against him.