Judicial reform dilemma for ZelenskyWhy are Ukrainian legislators willing to see innocent men serve life sentences?Lutsenko is helping block justice for innocent life prisonersDeath of Ukraine’s most famous torture victim to be reinvestigatedTortured & Almost Certainly Innocent Ukrainian Life Prisoner Dies Without JusticeForced to hunger strike in search of justice for their sonsUkraine’s MPs block last chance of justice for tortured Ukrainian prisonersJudicial Review demanded for Life Prisoners Tortured into ‘Confessing’ to AnythingInvestigator involved in Ukraine’s most notorious miscarriage of justice appointed to top prosecutor postUkrainian life sentence – because they needed to arrest somebodyUkraine’s most malicious miscarriages of justiceUkraine found in bulk violation of the prohibition of torture over denial of justice to life prisonersViktor Lozinsky, the ex-MP convicted of murder, wins in local elections in UkraineШлях в один кінець“Exceptional lawlessness requires extraordinary methods”. Ukraine’s leaders urged to free Volodymyr PanasenkoPersecution for independent rulings? Ukrainian judge who refused to imprison Saakashvili dismissedUkraine found in violation of the prohibition of torture over treatment of life prisonersHalf the candidates for Ukraine’s new Anti-Corruption Court suspected of corruption or questionable rulings10 Ukrainians imprisoned for murders committed by serial killerVital watchdog body refuses to take part in Potemkin reform of Ukraine’s judiciary
• Topics / The right to a fair trial

What judicial reform when it’s not Russia, but Ukraine that refuses to release an innocent life prisoner? 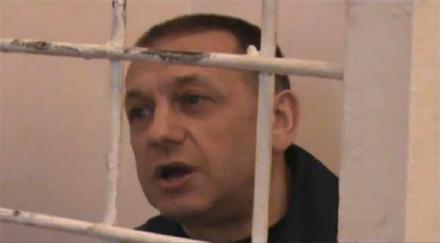 13 years have passed since a bomb explosion in Lviv claimed the life of a 14-year-old schoolgirl and led to the arrest and life sentence of a man whom nobody believed was guilty.  We cannot bring back to life Marika Kutsinda, nor can we make up for the hell her family has been through, yet surely we owe them justice, and that does not lie in an innocent man remaining imprisoned because a ‘culprit’ needed to be produced.

It is customary, even where sentences arouse deep concern, to merely call for a judicial review, rather than bluntly saying that an innocent man was given a life sentence.  In the case of Volodmyr Panasenko, there seem no grounds for such caution, nor does deference to a court ruling seem warranted.  Everything about this case was wrong from the outset, and as well as all major human rights groups, Panasenko’s innocence was publicly asserted by Ukraine’s first Human Rights Ombudsperson Nina Karpachova and prominent legal experts.

The car bomb that exploded on 26 October 2006 had been planted under a car belonging to Roman Fedyshyn, a Lviv City Councillor and owner of the Shuvar market.  He was unharmed, but Marika Kutsinda, who was walking past when the bomb exploded, was killed.

Rudy retracted his words in court, stating at both first trial, and then appeal level. that Panasenko had had nothing to do with the crime and that it had been commissioned by somebody else.  He later also wrote a statement saying that he had given false testimony against Panasenko under pressure from the investigator. The pressure, he specified, consisted of threats that he would get life himself if he didn’t provide the testimony and beatings.

Back in 2009, Karpachova, as Ombudsperson, called for a review of Panasenko’s life sentence.  This was ignored, as have been similar calls from legal experts and human rights groups.  In March 2016 Independent Ukraine’s first President Leonid Kravchuk called the Panasenko case a court travesty.

In 2018, the judge who had sentenced Panasenko to life imprisonment, Stanislav Holubytsky, was appointed Supreme Court judge.  This was despite a negative assessment from the Public Integrity Council which specifically noted his role in Panasenko’s imprisonment.

In an appeal to President Volodymyr Zelensky and the Verkhovna Rada, UHHRU and the Kharkiv Human Rights Group called the Panasenko case the most shocking of all judicial miscarriages.  That appeal can still be endorsed here.  The authors of the appeal stress that exceptional lawlessness requires extraordinary measures and call on Zelensky to ‘pardon’ 60-year-old Panasenko or on parliament to issue an individual amnesty.  Obviously a proper judicial review, which would certainly be in Panasenko’s favour seems better, however best of all must be for Panasenko to finally be home with his wife and daughter, who has become a lawyer since her father’s arrest.

It is believed that the Panasenko case and other apparent miscarriages of justice have not been rectified because to do so must entail questions being asked about the ‘investigators’, prosecutors and judges involved in such cases.

The choice for Volodymyr Zelensky and his party, Servant of the People, which holds an absolute majority of seats in parliament, is very clear.  Either they continue protecting those willing to imprison innocent men for their own ends, or they opt for justice here and now.