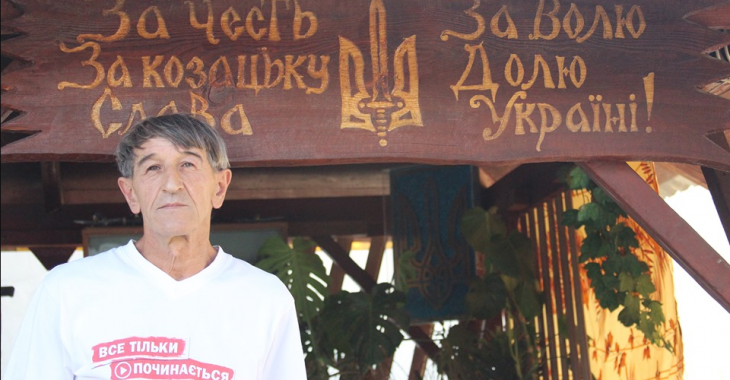 Under Russian occupation, the FSB in Crimea clearly sees no need to fatigue themselves by looking for real criminals.  The scenario of planted explosives, daubed with illegally obtained DNA traces, which is unfolding in the prosecution of Ukrainian activist Oleh Prykhodko, has already been used against at least three Ukrainian political prisoners whom Russia designated as ‘saboteurs’.  No actual crime is needed, and the ‘courts’ understand their role in the persecution far too well to ask inconvenient questions.

61-year-old Prykhodko had, from the beginning, made his opposition to Russian occupation of his Ukrainian homeland very clear, and had already suffered various forms of harassment, including at least one search.  This is of major relevance since, just like Volodymyr Balukh, Prykhodko had every reason to expect a new FSB visitation.  Even had he genuinely possessed explosives, he would hardly have stored them where they would immediately be found by the FSB.

He was arrested on 9 October after the FSB turned up and carried out ‘an inspection” of Prykhodko’s garage.  Judging by video footage, Prykhodko was not allowed into the garage and the FSB almost certainly had ‘witnesses’ whom they had brought with them.  They allegedly ‘found’ a TNT type 200 explosive, a detonator for UZRGM-2 and cut welding arcs, supposedly for insertion within the explosive device.  They claimed that Prykhodko had been planning to blow up the local administration building, but that the FSB had prevented this .

Prykhodko was taken away, and remanded in custody the following day.

As feared, on 28 October, the FSB formally laid ‘terrorism’ charges.  According to his lawyer, Nazim Sheikhmambet, Prykhodko is accused of ‘planning an act of terrorism’ (Article 205.1 of Russia’s criminal code) and of illegally preparing explosive substances (Article 223.1).

Another ominous similarity with previous politically motivated prosecutions emerged the following day with the news that the FSB had illegally ttaken DNA samples from Prykhodko. Sheikhmambet explains that on 9 October, after he was brought to the FSB in Simferopol, a person came up to him, claiming to be a doctor.  Claiming that this was part of an examination, the individual asked him to open his mouth and with a cotton wool tampon, he took DNA samples.

Former political prisoner, Ismail Ramazanov notes  that the same thing happened to Crimean Tatar activist Edem Bekirov.  The same tactic was also used in the ‘trial’ of retired sea captain Volodymyr Dudka and academic Oleksiy Bessarabov.  On that occasion, the biological traces were ‘found’ on a map allegedly showing places that they were supposed to be trying to blow up.  Once again the FSB had not overly exerted themselves.  The biological traces were only present on the edge of the map which contradicted the prosecution’s claim that the men had used the map.  This, and multiple other contradictions were simply ignored by the first Russian court that sentenced the men to 14 years, and then by the Russian Supreme Court that upheld the totally unwarranted sentences.

Ramazanov also reports that the same FSB ‘investigator’, Ivan Romanets who tormented Edem Bekirov, is now involved in the ‘case’ against Prykhodko.  Romanets gained particular notoriety for refusing to hospitalize Bekirov despite a number of grave illnesses that made the charges against him nonsense and his ongoing detention tantamount to torture and against even Russian legislation.

The terrifying thing about all these prosecutions is that essentially any nonsense, however wildly implausible, will do.  Russia began fabricating ‘terrorism’ charges against Ukrainians within two months of its invasion and annexation.  This new arrest, so soon after the release through an exchange of several prominent political prisoners ‘convicted’ of terrorism, including Oleg Sentsov and Volodymyr Balukh, confirms that such political trials will continued until Russia is forced to leave Crimea.