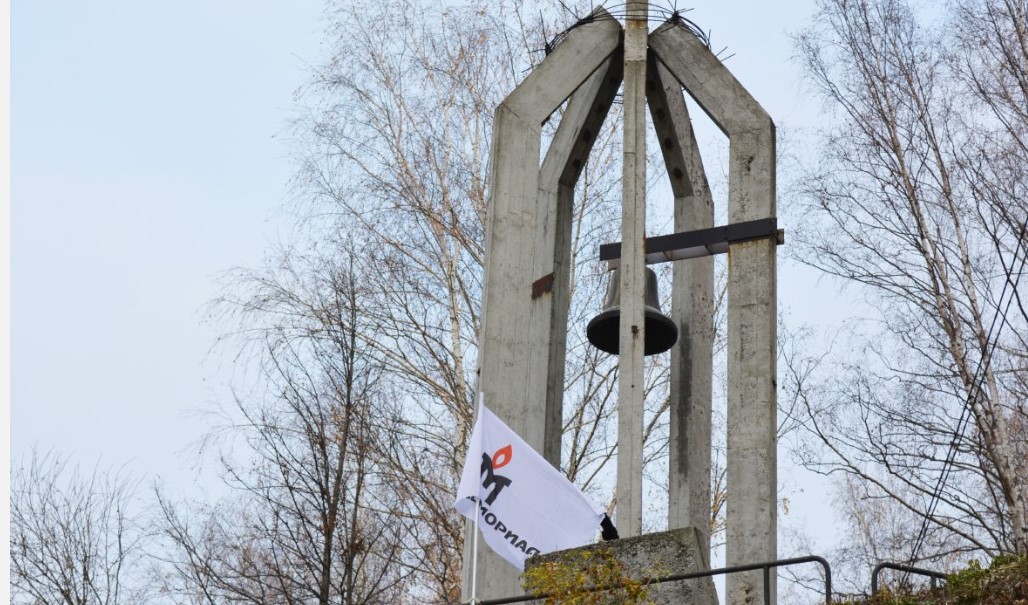 Searches have been carried out in Russia of Perm Memorial and the home of its head, Robert Latypov.  He was later released, but does not expect that this is the end since the official pretext in no way explains the scale of the operation against him and his organization. Under Russian President Vladimir Putin, the Memorial Society and all those who seek to learn and to tell the truth about the crimes of the Soviet regime have increasingly come under attack.  Such attacks are also increasing against civic organizations, like the ‘For Human Rights’ NGO and the Memorial Human Rights Centre, which defend the ever-increasing number of political prisoners in today’s Russian and occupied Crimea.

Officers from Russia’s FSB and so-called Centre for countering extremism arrived the morning after Remembrance Day for the Victims of Repression.   The search was officially in connection with a criminal prosecution initiated on charges of illegal tree-felling.  As reported, two criminal prosecutions were started in August this year against Russian and Lithuanian activists taking part in an expedition, organized by the Perm Memorial Society to honour victims of Soviet repression and tend to their graves.  This is a Memorial initiative in which volunteers search out abandoned settlements where people were forcibly deported during the worst years of the Soviet repression and the places where they are buried. They leave crosses, obelisks and also signs explaining that this is a place of burial of victims of repression.

A group of volunteers had been in Galyashor in the Perm oblast for around 5 days when, on 10 August, the police and officials from various authorities, turned up and charged them with illegally felling trees (under Article 260 of the criminal code carrying a sentence of up to three years’ imprisonment).  The volunteers are adamant that they had cleared only dead wood and branches, etc. which had come down in storms.  A forest range, moreover, confirmed to the police that the tree stumps at the site long pre-dated the Memorial expedition.

The charges were nonsensical, and so too is the attempt to justify the search on 31 October, and removal of documents and computer technology.  The Memorial Society issued a statement, in which it expresses bemusement at the very pretext for the search.

“What are the police looking for: felled trees or, perhaps, ‘the crime weapon’?  However the fact that a criminal prosecution has been initiated arouses both bemusement and outrage”.  The authors note that a week ago the Perm Region Ministry of Natural Resources issued a warning against Perm Memorial and two fines to a total of 250 thousand roubles for what was termed ‘’unauthorized occupation of forest plots’.

“Current officials cannot reconcile themselves with the fact that the occupations of forced special settlements occupied for their graves plots of the land that they did not come to be on of their own free will, and on which they had never envisaged either living, or dying.

The criminals who are to blame for these people having died far from their homes remained unpunished, and now persecute those who are trying to redeem the state’s guilt before those who died and their families.

You would hardly find a civilized country where such methods are used to persecute those who care for the graves of those who perished, whether civilians or soldiers”.

It was the Perm Region that saw the first concentrated attack on a museum informing the public about Soviet repression and its victims. The Perm-36 Museum was at the site of the notorious Soviet labour camp where many Ukrainian political prisoners were held, and where the great Ukrainian poet Vasyl Stus died in 1985.  A supposed initiative by the local authorities against the Museum coincided with programs on the  nationwide pro-Kremlin television channel NTV accusing the Museum and its staff of “re-writing history and glorifying Bandera supporters and fascists”.

The new offensive comes against the background of the ongoing persecution of world-renowned historian of the Terror and head of the Karelian Memorial, Yuri Dmitriev and imprisonment of another historian Sergei Koltyrin, as well as of the second wave of excavations at the site of the mass graves of victims of the Terror at the Sandarmokh Clearing in Karelia.  There are very real grounds for fearing that the Russian authorities are trying to rewrite history and claim that the over six thousand victims of mass executions at the site are not victims of the Terror, but Soviet POWs, supposedly executed while Karelia was under Finnish occupation during WWII.

Over recent weeks, President Putin has removed a number of the most vocal members of the Human Rights Council; the justice ministry has applied for the ‘For Human Rights ‘ NGO to be forcibly dissolved, and Memorial has faced new prohibitive fines for supposed failure to comply with the notorious law on ‘foreign agents’.  This offensive is taking place against the mounting number of peaceful protesters in Russia, and the persecution of Crimean Tatars and ethnic Ukrainians in occupied Crimea.