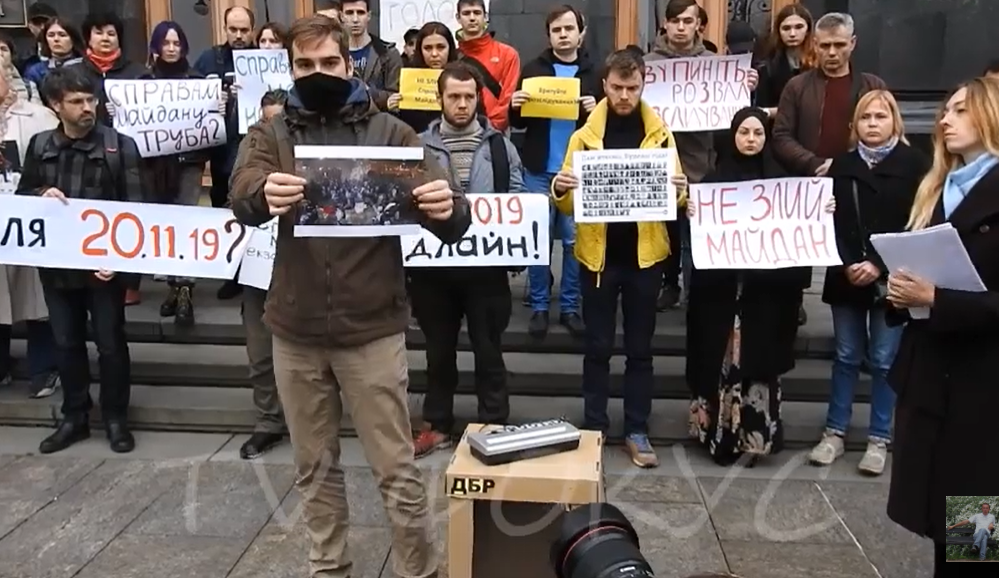 Ukraine’s leaders have literally eight days to prevent investigations into crimes against Maidan activists from falling into a black hole from which few, if any, will emerge.  Since Maidan victims, the families of those killed and lawyers representing them have long warned of the danger and recently set out clear steps to overcome the problem, it is difficult to believe that the danger to multiple investigations is not the result of direct sabotage.

On 20 November, the Prosecutor General’s Office is due to lose its investigative functions.  This is, in principle, a positive move, but only if investigations under the control of the PGO, including the Maidan investigations dealt with by the Department of Special Investigations are not jeopardized.  All such cases are due to be handed to the State Bureau of Investigations [SBI], however the latter does not have the department nor the staff to enable continuation of the investigations.

According to Yevhenia Zakrevska, one of the lawyers representing the families of slain activists, hearings into amendments to the Law on the State Bureau of Investigations are due to take place in the Verkhovna Rada on 13 November.   This will be the last chance to insert the necessary amendment before the bill is voted on in its second reading.  At present the amendment is that proposed by SBI Director, Roman Truba and very different from that sought by Maidan lawyers and victims, however Zakrevska believes that if the will can be found, the appropriate changes can be achieved.

The problem is that, up till now, there has been little to suggest that the will is there. The changes that can prevent Maidan investigations collapsing were proposed in an appeal by the lawyers and families of Maidan victims two weeks ago, on 28 October.  In clearly defined steps, Ukraine’s leaders were asked to ensure that the same investigators who have been involved in Maidan cases within the Department for Special Investigations can continue within a special department within SBI.

This required amendments to the Law on the State Bureau of Investigations to ensure the transfer and appointment within SBI without competition of investigators and prosecutors involved in teams working on criminal proceedings which are handed into the jurisdiction of SBI.  They proposed that this be achieved through the addition of amendments to the draft bill No. 2116 for its second reading, or by a separate draft bill.

Without such changes, the cases will simply disappear within SBI, with nobody answering for them. That would cause a break of one or even two years.

In many cases, this could lead to cases being entirely dropped. While the cases already before the court will continue, those still at investigation stage could easily end up without the suspects.  Olena Storozhuk, another Maidan lawyer, points out that it will not be possible to continue preventive measures if the investigations are suspended. There have been several high-profile cases in the past where key suspects, released from detention or house arrest, fled to Russia.

While there is still time to save the situation, Zakrevska notes with frustration that the situation has thus far only worsened. The amendments they proposed have not been introduced and SBI Director Truba “is manipulating public opinion and trying to use the problem of Maidan investigations to extend his powers.”

On 4 November, Truba published a blog on Ukrainska Pravda in which he stated that Maidan cases would need to be suspended for a time.  He presented the problem as being one of the inadequate (in his opinion) number of SBI investigators envisaged by the Law on SBI.

The 28 October appeal called for the new department within SBI to be headed by Serhiy Horbatyuk, the former Director of the Special Investigations Department who has earned the trust and confidence of Maidan lawyers, victims and civic society.  He was recently dismissed, officially over his refusal to sign an agreement to the use of anonymous denunciations not requiring official confirmation in the new accreditation procedure for prosecutors.  His dismissal has caused dismay and also suspicions as to the reasons, especially since not all of those who refused to sign this agreement were dismissed.

The suspicions are only exacerbated by the failure to heed another urgent plea in the appeal, namely that people like former aide to ex-President Viktor Yanukovych Andriy Portnov and others be prevented from having anything to do with the Maidan investigations.

On 30 October, the Prosecutor General Ruslan Riaboshapka appointed Viktor Mysyak as head of the PGO’s Department on Investigating Crimes linked with Euromaidan. Oleksiy Donsky was appointed his deputy.  The Advocacy Advisory Panel (of lawyers representing Maidan victims or their families) fully supported the appointment of Donsky but expressed bemusement and concern over Mysyak, who had already, “as protégé of Serhiy Kiz” (controversially appointed Deputy Prosecutor General in July this year) headed the procedural department on Maidan cases.  Mysyak’s appointment, they said, was totally counter to what they had asked, since both he and Kiz had “systematically sabotaged Maidan cases”.

Mysyak “is himself a person who obstructed investigations in the past” and “his appointment is a sign to investigators and prosecutors that the Prosecutor General’s Office management do not see the achievement of results in Maidan investigations as a real objective”.  Zakrevska notes that a huge number of prosecutors were categorically against Mysyak’s appointment and the drain of prosecutors has continued.  She is also convinced that SBI Director “Truba and Portnov have shown that that they will work in close cahoots with respect to Maidan cases, and will in every way obstruct the investigation and persecute investigators.  The story with the two stolen volumes of cases which Portnov brought to Truba is a case in point”.

Truba announced on 5 November that SBI had initiated criminal proceedings over the alleged loss of two volumes of a Maidan case by investigators from the Department for Special Investigations.  He said that Portnov had brought the two volumes to them.

As reported here, Portnov has been extremely active since his return to Ukraine on the eve of Volodymyr Zelensky’s inauguration in lodging all kinds of complaints, especially to the State Bureau of Investigations.  An ongoing ‘investigation’ by SBI into Portnov’s allegations that ex-President Petro Poroshenko was guilty of ‘provocation’ and essentially caused Russia’s attack on three naval boats near Crimea on 25 November 2018 has elicited outrage, among others, from the lawyers representing the 24 Ukrainian seamen whom Russia seized and illegally held as POW for 10 months.  Ilya Novikov, for example, has pointed out that this investigation is essentially helping Russia in pushing a narrative which was undoubtedly rejected by the International Tribunal for the Law of the Sea, and by the international community.  This is not the only example of apparent cooperation between SBI Director Truba and Portnov in investigating alleged abuses of power by former President Poroshenko.

Portnov was closely involved with the Yanukovych regime, and a serving member of the latter’s administration during Euromaidan.  Andriy Bohdan, the controversial head of Zelensky’s Administration and a friend of Portnov, also held a governmental post during that period.  Horbatyuk has recently asserted that his Department was very close to informing Bohdan that he was under suspicion (though not in connection with Maidan) and accused the State Bureau of Investigations of “carrying out Portnov and Bohdan’s will.”

On 8 November, when there were still 12 days left, the children of at least two slain Maidan activists were among the protesters who gathered outside the President’s Administration demanding action to save the investigation and reminding Ukraine’s leaders that impunity kills. Over 100 people died on Maidan.  Allowing such sabotage will be a terrible betrayal.