Moscow court convicts Udaltsov and Razvozzhaev on ‘riots’ chargesRavozzaev still in detention as first anniversary of Kyiv abduction approachesOngoing imprisonment for abducted asylum seekerWhy is Ukraine ready to extradite refugees?UNHCR: Ukraine must not extradite a person recognized as a refugee in the USAFormer Tajik Prime Minister also detained in Ukraine on extradition requestDanger of Uzbek refugee being extradited to UzbekistanUnprecedented Cynicism in the Razvozzhaev CaseNowhere to turn: Suicide of Russian asylum seekerRazvozzhaev Case: No Pretence of Rule of LawRazvozzhaev: Any change in my testimony will be through coercionOfficial noises from the police over Razvozzhaev caseEnforced Silence: From Kyiv to SiberiaCharges and questions multiply in the Razvozzhaev caseRazvozzhaev case: Answers urgently requredRazvozzhaev: No let up to lawlessnessNo Offence?Moscow court finds the arrest of abducted asylum seeker Leonid Razvozzaev legalAsylum seeker abducted from Ukraine, imprisoned in Russia. End of story?Mossad, FSB, and others: make yourself at home!
• Topics / On refugees 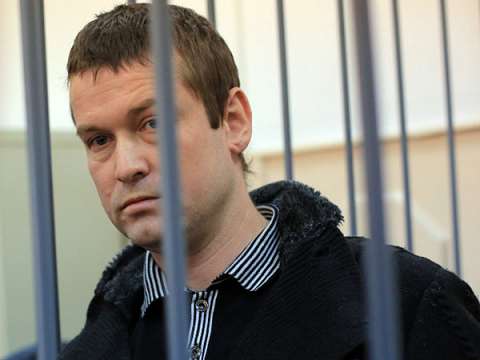 Ukraine has, together with Russia, been found in violation of the European Convention on Human Rights over the abduction of Leonid Razvozzhayev, a Russian left-wing activist who was illegally taken to Russia and imprisoned for several years. Ukraine’s role dates back to 2012 and the presidency of Viktor Yanukovych, however this is not the only time that Ukraine’s enforcement bodies have shown disturbing willingness to collaborate with their Russian counterparts.

Razvozzhayev was abducted in Kyiv  on 17 October 2012 when he stepped out for a lunch break having filled in registration forms for an asylum application at the office of the Hebrew Immigrant Aid Society, an organisation that assists refugees in applying for asylum in Ukraine and elsewhere.  He was heard shouting for help and seen being forced into a car with Ukrainian number plates.  He was then taken across the border into Russia, where on 19 October a Moscow court remanded him in custody for 2 months, with this later extended.  It was claimed in Russia that he had “handed himself in” and “confessed to plotting political unrest and violence, however Razvozzhayev was able in court to shout out that he had been tortured. He later retracted the “confession” and said that it had been obtained through physical force and threats.

There had been no extradition request and Razvozzaev was in Ukraine legally.  He was also, effectively, an asylum seeker and therefore under international protection.  It was reported at the time that the changes against him were likely based on a program produced by the NTV television channel that has become notorious under President Vladimir Putin for scurrilous programs aimed at discrediting various opposition or civic groups.

Although Razvozzhayev’s abduction was immediately and widely reported, Ukraine’s Interior Ministry and SBU denied any part in the abduction, and the border guards claimed that Razvozzhayev had crossed back into Russia voluntarily.  Despite protests from human rights groups, neither the Ukrainian authorities nor the then Human Rights Ombudsman Valeria Lutkovska did much more than give vague promises of an investigation.

Applications from two left-wing activists – Razvozzhayev and Sergei Udaltsov – were  considered together, with both having also challenged their conviction and imprisonment for having supposedly organized acts of mass disorder in 2012.

The European Court of Human Rights found unanimously that both Razvozzhayev’s and Udalstov’s rights under Article 3 (the prohibition of torture and inhuman and degrading treatment) and Article 5 (right to liberty and security) had been violated because of the failure by both Russia and Ukraine to carry out an effective investigation into the allegations that he had been abducted by Russian state agents while in Ukraine and returned to Russia against his will.

The Court ordered Russia to pay 11,000 euros to Razvozzhayev, and 9,000 to Udaltsov, while Ukraine was ordered to pay Razvozzhayev four thousand euros in compensation.

The prosecution of Razvozzhayev and Udaltsev was part of multiple arrests and jail terms over the Bolotnaya Square protests on 6 May 2012 over Putin’s running for third term as President. The enforcement bodies came down very hard on peaceful protesters, claiming that the demonstrations had been ‘mass riots’.  There were some clashes between police and protesters, but in many, if not all, cases these were caused by the fact that the police forced protesters into an area that was much too small for the number of people.

There were two contentious areas in this case where several judges, including Hanna Yudkivska, the ECHR Judge from Ukraine expressed dissenting views.

The first issue pertained to “the allegation that Mr Razvozzhayev (the first applicant) was abducted in Ukraine by Russian State agents and brought back to Russia, with the cooperation of the Ukrainian authorities.  The three judges stated that they had voted with the majority in finding a violation of Articles 3 and 5 of the Convention, by Russia and Ukraine, on account of the failure to carry out an effective investigation into Mr Razvozzhayev’s allegations of unlawful deprivation of liberty and inhuman and degrading treatment (see operative point 7).

They suggested, however, that this had not gone far enough and that there had been a substantive violation of Articles 3 and 5 by both respondent States, i.e. both had been implicated in what was a state abduction.

Ukraine’s judge, as well as two others, also issued a dissenting opinion regarding the Court’s rejection of Razvozzhayev’s complaint that his right to peaceful assembly had been violated.  While a majority of the judges had deemed that his actions had not fallen within the notion of ‘peaceful assembly’, that he had “deliberately led a number of individuals to break through the police cordon, thus creating an escalation of violence and triggering the onset of clashes”, they believe that this is not so clear.  They outlined the facts known and said that they are not convinced that Razvozzhayev had displayed conduct that placed his acts outside the scope of protection of Article 11 (freedom of expression).

The Court’s ruling against Ukraine in this case cannot be called surprising.  As mentioned, what remains completely baffling is that even after Russia’s invasion of Crimea and military aggression in Donbas, Ukraine’s enforcement bodies have continued to collaborate with Russia.  The most shocking cases were those of Timur Tumgoev;  another Russian opposition activist Vladimir Yegorov and Amina Babaeva.