Interior Minister Avakov accused of manipulating public opinion over Ukraine’s most controversial trial Who answers for Antonenko’s imprisonment if Ukraine’s trial over Sheremet murder collapses?Ukraine on brink of abetting Russia by destroying vital Crimean Tatar TV ATR What is wrong with the bill on SBU?Ukraine’s President Zelensky blocks three pro-Russian channels linked with MedvedchukOutrage as Ukraine’s Culture Minister allows synagogue to be built on graveyard at Babyn Yar Zelensky gives top post to official involved in storming of Maidan 2020: There was no worse year in the realm of human rights after the Revolution of DignityA brief description of the KHPG strategic litigations in July–December 2020Lukashenko plotted to kill Sheremet yet Ukraine has charged people with no motive for his murder National monitoring of unlawful violence in police in Ukraine in 2020. SummaryRussian oligarch plans for Babyn Yar seem aimed at fuelling anti-Semitism in Ukraine Savagely beaten Maidan activist Tetyana Chornovol formally charged with a non-existent murderTotal impunity for Ukrainian politician suspected of involvement in killing of journalist SerhiyenkoOpinion on the political motives of criminal persecution and violation of human rights in the case of Sergiy PashinskyPolice summons for Briton who criticized Sheremet murder case as Avakov’s ‘public show’Crisis deepens after Constitutional Court sabotages Ukraine’s anti-corruption reformZelensky’s ‘survey – legally questionable and cynically populistOver 10 thousand Ukrainians demand that Zelensky dissolves corruption-tainted Kyiv courtSBU demands that asylum seeker retracts testimony to ECHR about torture in secret SBU prisons
• Topics / Law enforcement agencies 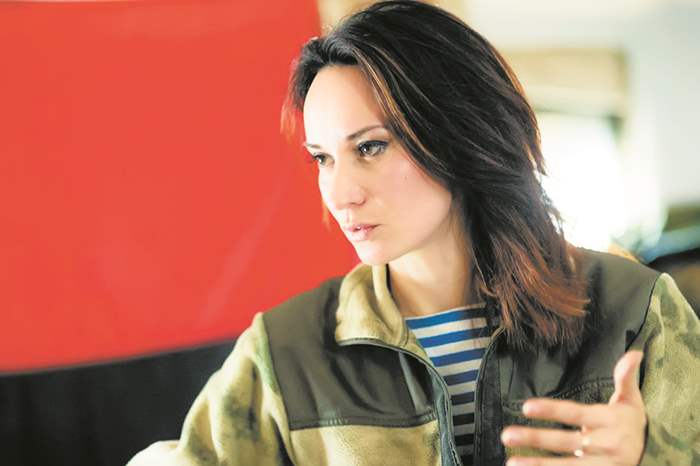 Criminal proceedings have been initiated against well-known military volunteer Marusia Zvirobiy and MP Sophia Fedyna over a video on YouTube and Facebook which, it is alleged, contains “threats of murder” directed against Ukrainian President Volodymyr Zelensky.  Concerns about the grounds for such charges were only exacerbated on 28 November by the search carried out, with serious infringements, of Zvirobiy’s home in the village of Kalynivka.

The State Bureau of Investigations announced on 26 November that, working in close cooperation with the SBU [Security Service], its investigators had sent the Prosecutor General’s Office proposed notification to both the unnamed “MP and citizen” that they were suspected of the crime set out in Article 346 part 1 of Ukraine’s Criminal Code, namely threats of murder … made in respect of the President of Ukraine.  These had allegedly been made during an online broadcast via YouTube and Facebook on 26 October 2019 in Lviv.

The video was made just after a highly-controversial meeting, which turned into a clash, between Zelensky and war veterans in Zolote (Luhansk oblast) who opposed the President’s plan for disengagement and withdrawal of troops and armaments.  Zelensky’s very dismissive words to the veterans were captured on video and fairly widely criticized.  Although the criticism was particularly strong from those who view the President’s acceptance of the Steinmeyer Formula and disengagement as capitulation, many were also angered by what they saw as extreme disrespect for war veterans.

Both women, although especially Zvirobiy, who has herself been a military volunteer and military instructor since 2014, were clearly outraged by the Zelensky video and expressed their views very strongly.  Close to the end of an undoubtedly strong tirade, Zvirobiy says that the difference between Zelensky and former President Petro Poroshenko is that Ukrainians had wanted to see Poroshenko in prison.  In Zelensky’s case, she asserts, they want to see him dead. Addressing Zelensky directly, she says: “You are doing such harm to this country that everybody wants you to be dead and is simply discussing whether it’s better to hang you, or to shoot you or whether a grenade will go off somewhere”.

Fedyna, who is an MP from Poroshenko’s European Solidarity party, follows this up, noting that the President thinks he's immortal but he's not, and continuing the thought process of how he could be blown up or hit by shelling, etc.

The words are brutally hard-hitting, but can they be viewed as a threat of murder against Zelensky, or even as incitement to others to kill him?  Some MPs from Zelensky’s own Servant of the People party thought so and demanded an assessment from the law enforcement bodies.

This came on 26 November from the State Bureau of Investigations, however that is still very far from a criminal prosecution reaching the courts.  This is not merely because permission is needed from the Verkhovna Rada for Fedyna to face prosecution.  Although Servant of the People MPs hold an absolute majority, it is not guaranteed that all would vote in favour of such a step.  There have, admittedly, already been some startling pronouncements.  On 28 November, Olha Vasilevska-Smahlyuk, a former journalist for many years but now a Servant of the People MP, asserted on TV that “there is such strong freedom of speech in the country that it might be time to slightly muffle it”.

Any assumptions about freedom of speech being strong enough to withstand attempts to restrict it are to be treated with maximum caution.  It does, nonetheless, seem difficult to imagine how the prosecution would plan to prove that the two women were threatening to kill Zelensky, rather than merely saying, however unkindly, that everybody wants him dead and predicting that a way of bringing his death about would be found.

Zvirobiy condemned the charges and the search on 28 November as politically motivated, and saw no reason to change her words about Zelensky.  Both she and the lawyers who arrived within a couple of hours have also pointed to serious irregularities in the enforcement officers’ behaviour.

41-year-old Zvirobiy (whose real name is Olena Bilenka) was at home with her grandmother, mother and 4-year-old daughter when officers from the State Bureau of Investigations and SBU turned up at around 6.30 a.m.  According to one of the lawyers, Andriy Pysarenko, the first infringement was in staging such an early morning search in the first place, given that there was a small child in the house.

Zvirobiy asked the officers to wait until her lawyer could arrive.  They refused, although having a lawyer present is a right guaranteed in Ukraine’s Criminal Procedure Code.  Instead they simply threatened to break the door down if she did not let them in.  They also brought their own ‘official witnesses’ with them which hardly inspires confidence as to the latter’s lack of bias. The list of infringements does not end there, since there was also an SBU officer present who should not have been, since he is not a part of criminal proceedings.

As well as telephones and a notebook, the officers also removed an old (1944) rifle.  They asserted that the permit for holding it was out of date, which Zvirobiy denies.  Oleh Veremiyenko, a second lawyer, is convinced that Roman Truba, Director of the State Bureau of Investigations is fabricating criminal prosecutions.  He notes that during the search, they wrote down only that a rifle of such and such a make had been removed, without mentioning a critical point, namely that it has a sawn-off barrel which, he says, means it could not be used.

Zvirobiy considers the search to be political persecution and points out that they are using words taken out of context and spoken immediately after Zelensky had, in her view, been very rude to military servicemen.

They should carry out searches of the homes of people who are harming the country, she says, and not of those who are defending it.