Sentsov: Whenever you think of friendship with Putin and Russia, remember the 13,000 Ukrainians killed and hundreds imprisonedBenefits of PACE ‘dialogue’? Dramatic increase in number of political prisoners in Russia & occupied CrimeaNo ‘normalization’ while Russia is still holding at least 87 Crimean Tatar and other Ukrainian political prisonersIf Crimea is Ukraine, then take real measures to defend Crimean Tatar political prisonersCivil society warns Council of Europe that the time is not right to lift sanctions against RussiaRussia bulldozes vast amounts of food while tens of millions live below the poverty lineCall for Political Boycott of the World Cup in Russia until the Kremlin’s Ukrainian hostages are freed’Like Being A Slave’: Workers On Russia’s Bridge To Crimea Report Abuse, DeceitRussian propaganda must be challengedFinal Narrative Report on the KHPG Project «Creation of a National System for Preventing Torture and Ill-Treatment in Ukraine»Ukraine’s Systemic ErrorThe Limited Force of Fine WordsFighting phantomsHuman Rights in Ukraine - 2005: XVI.The Observance of Prisoners’ Rights
• Topics / Victims of political repression
• Topics / Human Rights Abuses in Russian-occupied Crimea 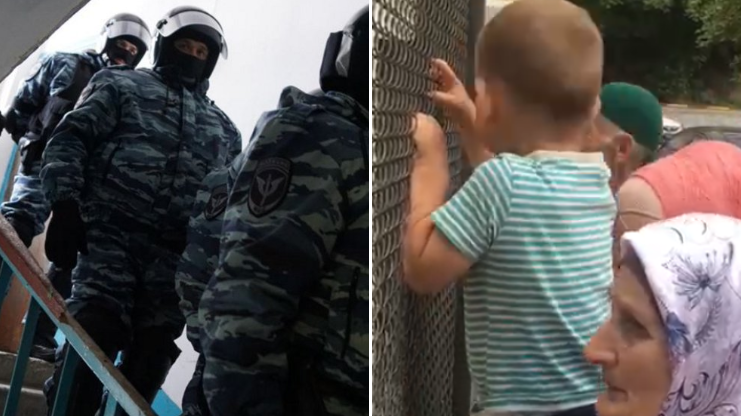 Apple Inc. has informed Reuters that it is “taking a deeper look at how we handle disputed borders” following public outrage over its willingness to pander to Russia and call occupied Crimea ‘Russian’.  What a ‘deeper look’ means is not immediately clear, but the comments from Apple spokeswoman Trudy Miller contain one crucial inaccuracy.  Territory is ‘disputed’ when two countries consider it to be part of their territory.  Until 2014, Moscow had never disputed the fact that Crimea is a part of Ukraine, and it has not withdrawn from numerous international treaties in which this recognition is clearly articulated.  The ‘Russian law’ to which Miller referred is a document in breach of international law.  By changing its maps, whether in Russia alone, or everywhere, in order to retain Russian business, Apple is collaborating with an aggressor state.  It is to be hoped that Apple would not have considered it acceptable to change its maps as Nazi Germany invaded other European countries.  It should not now collaborate in the same way with Russia, and if it continues to do so, it should face sanctions.

It was reported last week that Internet users in Russia had found that locations in Crimea were marked as ‘Russia’ on Apple’s Maps and Weather apps. A Moscow-based Guardian reporter wrote also that users “see a boundary between Ukraine and Crimea when viewing maps of the region, although it seems to disappear when they zoom out.”

Such craven capitulation to Russian pressure is in direct breach of a UN General Assembly Resolution from 27 March 2014, calling on all countries to avoid doing anything that suggests acceptance of Russia’s illegal aggression.  That principle has been endorsed by all international bodies and democratic countries, where Apple also has business interests.

It is possible that Apple’s management have taken a purely commercial decision based on the assumption that money does not smell and that they will lose more custom from Russia by not collaborating, than from former clients who will now boycott their products.

The stakes for them are, however, very high since this is no minor act of commercial cynicism, and Apple is not just “annoying Ukraine”.  By pandering to Russia, it is helping a regime that has brought enforced disappearances, abductions, killings and political persecution to Crimea and that is persecuting the indigenous Crimean Tatar people who opposed Russia’s invasion and annexation of their homeland.

On 26 November, Oleg Sentsov, the Ukrainian filmmaker who spent five years in Russian captivity for opposing annexation, belatedly accepted the Sakharov Prize.  In a speech to the European Parliament which was met by a standing ovation, he stated: “Whenever any of you think to hold out a hand of friendship to Putin over our heads, remember each of the 13 thousand killed in Ukraine; the hundreds of our lads who are still in prison and who could be being tortured as I speak, Crimean Tatars who could be arrested at this very moment.”

Around 100 Ukrainian political prisoners are now illegally held in occupied Crimea and Russia, with many of them imprisoned for opposing Russian annexation.  The vast majority are Crimean Tatars who have received or are facing horrifically long sentences on totally fabricated ‘terrorism’ charges.  Since the arrest of Sentsov and three other Ukrainians in May 2014, Russia has systematically used ‘terrorism’ and ‘extremism’ charges against civic activists and journalists in reprisal and to crush opposition to its invasion and occupation of Crimea.

Crimean Tatars and other Ukrainians have paid for their courage and unwillingness to be silent in the face of oppression with their liberty.  Some paid with their lives, including Reshat Ametov whose abduction from his silent protest against the Russian invaders and horrific death through torture were never investigated.  Why would Russia investigate killers whom they were supporting, or which its enforcement bodies carried out?

The list of human rights violations is very long, with most involving whole families  whose lives have been shattered.

Apple would be well advised to take “a deeper look” at just how many moral principles it is prepared to publicly sacrifice in exchange for Russian money.