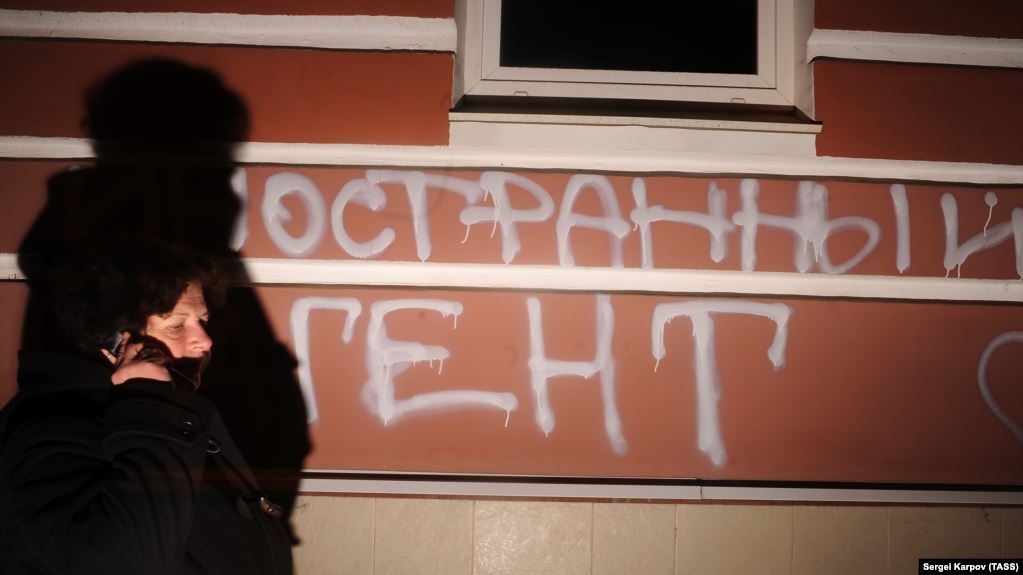 Russian President Vladimir Putin has signed into law a bill making it possible to brand virtually any journalist, blogger or civic activist a ‘foreign agent’, and MPs are pushing through a further law that will  impose crippling fines or even imprisonment for failure to insert the label on any material they make public.  This is yet another blow against freedom of speech with serious implications for occupied Crimea where Russia has already crushed independent media and is using criminal prosecutions and huge sentences against civic journalists who report on political persecution.

The Law on Foreign Agents has been used as a weapon against civic NGOs since 2012, with the aim clearly being to present renowned organizations such as the Memorial Society as ‘traitors’, or in Stalinist terms, ‘enemies of the people’.  As Putin’s popularity wanes, and socio-economic problems increase, the regime has broadened its offensive. In December 2017, the Russian Justice Ministry declared Krym.Realii, Real Time and many other services linked with Radio Free Europe / Radio Liberty, as well as Voice of America, ‘media foreign agents’.  While Russia tried to present this as a tit-for-tat measure in response to the requirement that RT, or the Kremlin-funded Russia Today, register as an agent of a foreign government in America.  There is a huge divide between the two situations.  RT is a propaganda tool for Moscow, which invariably pushes Russian foreign policy, including on such issues as Russia’s aggression against Ukraine.  Krym.Realii, and other Radio Free Europe / Radio Liberty resources, have provided an invaluable source of truthful information on subjects which are systematically muffled or distorted by the Russian state or Russian-controlled media.

The new bill which Putin signed into law on 2 December makes it possible to brand individuals as ‘foreign agents’ in a dangerously broad range of situations, and by no means only if they directly work for a foreign press agency. An individual can be labelled a ‘foreign agent’ for circulating material produced by, for example, Krym.Realii, or for taking part in creating it, and for receiving money or assets from abroad, or from Russian legal entities receiving foreign funding. This essentially places any journalist, blogger or activist in danger if they have received any funds from abroad, however modest, or even if they have been provided with equipment, etc. from a Russian legal entity which has been designated as a foreign agent.  Most media, and virtually all NGOs, need foreign grants to survive.  They are in no way ‘agents’ of the grant-giver, yet the Russian authorities will now have a potent weapon to use, not only against the NGOs and media, but also against individuals having even a tenuous relationship to them.

If a person is labelled a ‘foreign agent’, s/he will need to mark any material they post as being from such an ‘agent’, as well as being subjected to numerous other checks and restrictions.

It is dangerously, and almost certainly deliberately, unclear how far this new law could go.  The Memorial Society has recently faced several crippling fines, in one case because a post on social media not having the ‘foreign agent’ label.  Would anybody reposting a Krym.Realii article, for example, be labelled as a ‘foreign agent’ if they could be proven to have been funded to visit mainland Ukraine or abroad?  These are serious concerns given Russia’s efforts to stifle independent information about human rights abuses in occupied Crimea, with crucial information provided by civic activists or bloggers.

Nor is this the end of the problem.  On 3 December, Russia’s State Duma voted through its second reading of a draft bill imposing draconian fines or even a 15 day prison sentence for what are called ‘gross violations’ of regulations on ‘media foreign agents’.  A gross violation is understood as being two infringements in the space of a year.  Since the demands would include labelling everything one posts, conceivably even just on Facebook, as being from a ‘foreign agent’, it would be extremely easy to notch up two or many more “gross violations”.

Putin took very little time to sign the first bill and the second seems likely to be fully passed very soon. The haste makes it particularly difficult to believe those Russian officials who dismiss the concerns expressed by most international human rights and media NGOs and claim that the law will only occasionally be applied.  This is yet another weapon against those who report on the situation in occupied Crimea and Russia.  It is clearly aimed at encouraging self-censorship among journalists and bloggers, but contains dangerous mechanisms against those who refuse to be silenced.