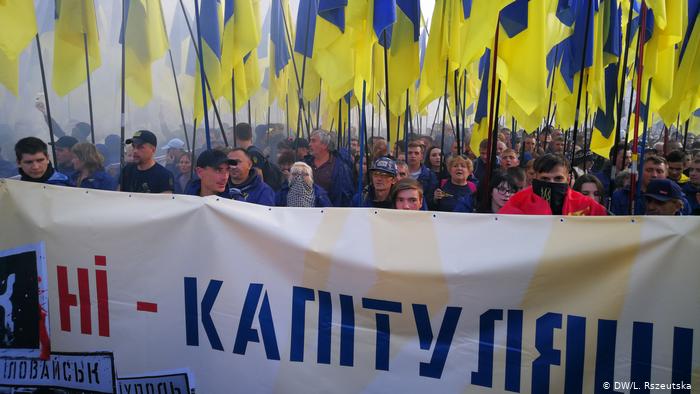 A new public opinion poll has found that only 14% of Ukrainians believe that, for the sake of peace in Donbas, any concessions are possible. Although only a minority has ever believed that it is worth paying any price, this is still a significant drop from May 2016 when 22% held that view and June this year when the figure still stood at 20%.  The results were made public on 6 December, three days before the scheduled ‘Normandy summit’ and first meeting between Ukrainian President Volodymyr Zelensky and Russian President Vladimir Putin. Such timing was clearly deliberate with leading sociologists like Iryna Bekeshkina, Director of the Democratic Initiatives Foundation [DIF] and her colleagues having long warned of public opposition to most of the concessions which the Kremlin is demanding.  In a recent interview, Bekeshkina noted that they had recently carried out a survey of analysts (in Ukrainian, ‘experts’).  When asked what could provoke a third ‘Maidan’, a majority of the analysts had named unacceptable compromises or capitulation to Russia.

The public opinion poll carried out in the first half of November 2019 by DIF and the Kyiv International Institute of Sociology certainly reads like a warning list for the Ukrainian President of concessions that would not be tolerated.  It was undertaken in all parts of the country under Ukrainian government control, and although there were regional differences, certain fundamental positions were observed everywhere, often on the moves most pushed by Moscow.

A majority of Ukrainians have consistently rejected the amnesty for all participants in military action against Ukrainian soldiers which Russia is insisting on, citing the Minsk Agreement.   The latter, in English, reads: “amnesty will be granted to protesters and to those who have left buildings and other public places and surrendered weapons, with the exception of those found guilty of capital crimes”.  In Ukrainian, this was translated as “grave crimes”, although in neither case have the scope and exceptions to this amnesty been clearly identified.  In the survey just published, 62.7% of Ukrainians stated that a full amnesty was unacceptable, as against only 18.6% who were prepared to support it.  When given various options for whom an amnesty should apply, 8.6% opted for a total amnesty without exceptions; 22.2% for the above-described amnesty for all but grave crimes (killing of civilians; torture; etc.);  Almost a quarter of the respondents (24.9%) said that there should be no amnesty at all.

The other point where the Ukrainian public does not support the position pushed openly by Russia, and implicitly through the so-called Steinmeier Format, is on the subject of local elections in occupied Donbas. 68% of Ukrainians are against the holding of such local ‘elections’ on the conditions demanded by the militants (of the self-proclaimed ‘Donetsk and Luhansk people’s republics’), with only 17.8% considering this to be acceptable.  When asked how they viewed the holding of local elections on territory not under government control, there was a slightly higher percentage (20.2%) who agreed that such elections should be held as quickly as possible without any preconditions, as the beginning of the peace process.  That number is smaller than the 23.4% who would agree to such elections only after the disarming of the militants and liberation of the territory from Russian military and the 24.5% who thought that elections would only be possible several years after reestablishment of control.  Rather worryingly, 12% responded that there should be “no elections, we need to renounce this territory and let them live as they wish”.

The Russian-pushed Minsk solution of ‘special status’ for occupied Donbas remains unpopular with the public.  Only 29.9% believe it acceptable to enshrine such status in the Constitution, while 53.2% believe it to be unacceptable.  The current Law on Special Status is up for renewal at the end of December.  Zelensky and his team have promised a new law, rather than a mere extension, as the result of the talks on 9 December.  Such promises have aroused alarm among many Ukrainians who remember two occasions where ex-President Viktor Yanukovych made critical concessions to Russia without any warning.  The second of these – the renunciation of the EU-Ukraine Association Accord led to the Euromaidan protests.

It is clear that the majority of Ukrainians do not support the ongoing existence of the so-called ‘republics’.  62% said that they would like the territory in question to return to Ukraine under the same conditions as before, with a further 12.2% wanting them to return to Ukraine, but with greater independence from Kyiv. 10.1% were willing for them to receive autonomy within Ukraine.  Only 2.4% thought they should become independent and a further 1.5% that they join the Russian Federation.

One piece of good news for Zelensky was that a relative, if not absolute, majority (44.4%) see the disengagement of troops as a positive move towards establishment of peace.

This survey was carried out only a few weeks after the highly controversial survey of people in the so-called ‘republics’ by the New Image Marketing Group, on behalf of Dzerkalo Tyzhnya and the Institute for the Future think-tank.  The results of that survey were extremely disconcerting, with a huge majority (76%) apparently agreeing either totally or probably that the war in Donbas is “an internal Ukrainian conflict”, and with 86% disagreeing that the conflict had been provoked by Russia.  Concern has been expressed as to the New Image Marketing Group’s previous record, and certainly their results are staggering different from those in the survey just published.  Even if we assume that the survey was carried out in good faith with maximum effort to achieve reliable results, sociologists have expressed serious doubts as to whether it is possible to carry out any realistic surveys under present conditions.  Such conditions include the lack of any independent media and the likely fear of expressing pro-Ukrainian views since these can get you ‘arrested’, tortured and imprisoned.  At present, those same factors and others would surely make any free and fair elections quite impossible.