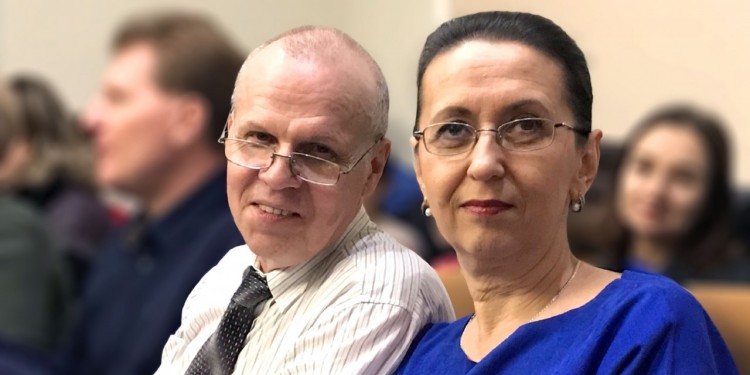 A Russian court has sentenced 55-year-old Vladimir Alushkin to six years’ imprisonment for supposed ‘extremist activities’, namely reading the Bible and practising his faith. The same Leninsky District Court in Penza passed two-year suspended sentences against five other Jehovah’s Witnesses: Vladimir’s wife, Tatyana; Vladimir Kulyasov; Galiya Olkhova: Andrey Magliv, and Denis Timoshin.  Since their suspended sentences are conditional on not repeating the absolutely normal activities of believers, such as attending meetings or preaching their faith, it is more than likely that some or all of the five will also end up behind bars.

This is the third 6-year prison sentence (after those of Denis Christensen and Sergei Klimov) since Russia reinstated the religious persecution of the Soviet regime by banning the Jehovah’s Witnesses as a supposedly ‘extremist’ organization in April 2017.  It is the ninth real prison sentence to date, but since there have also been other suspended sentences, that number is likely to rise, including in occupied Crimea where the ‘trial’ is now underway of 49-year-old Sergei Filatov from Dzhankoy.  It is also probably only a question of time before Russia resorts to Soviet and Nazi persecution of young men who cannot, as Jehovah’s Witnesses, do military service, but who cannot cite their faith, since this has been banned, as grounds for doing alternative service.  It is known that at least one young man in Crimea was told to renounce his faith or face the conscription which Russia as an occupying state has no right to impose on the peninsula.

According to Jehovah’s Witnesses sources, Vladimir Alushkin was arrested on 15 July, 2018 after armed and masked officers, led by major Alexander Bukov, burst into his home. In the course of a four-hour search, they seized cell phones, electronic devices, Bibles, and other literature. Three other homes were also subjected to searches that day, with around 40 people taken in for questioning.

Alushtin, who worked in a scientific research institute, was held in SIZO [remand prison] for almost six months before being released under house arrest.  Although the sentence on 13 December, passed by judge Roman Tanchenko, will certainly be appealed, Alushtin was taken into custody from the courtroom.

In August 2019, the UN’s Working Group on Arbitrary Detention issued a 12-page opinion which condemned Alushkin’s arrest and detention on charges under article 282.2 (1) of the criminal code (organizing the activity of an extremist organization).  WGAD wrote that “it was alleged that Mr. Alushkin and individual Jehovah’s Witnesses in Penza had committed a criminal offence by practising their faith, which purportedly contravened the liquidation decision. In particular, it was alleged that they had committed a criminal offence “by holding conversations in public places and residential premises with the inhabitants of the city of Penza … by recruiting new members from among their relatives, friends and residents of the city of Penza” and holding religious services “to study their ideology”.

The court in Penza, almost certainly obeying orders from other quarters, has ignored the Working Group’s criticism and call for Alushkin’s release, claiming that the 2017 Russian Supreme Court ruling banning the Jehovah’s Witnesses takes precedence.

It does not, but for the moment, Russia’s repressive machine against the Jehovah’s Witnesses is seizing more and more prisoners of conscience.

As well as nine believers sentenced to real terms of imprisonment for their faith, there are also 297 Jehovah’s Witnesses facing criminal charges based on their faith in Russia and occupied Crimea.  43 believers are in detention and a further 22 under house arrest.