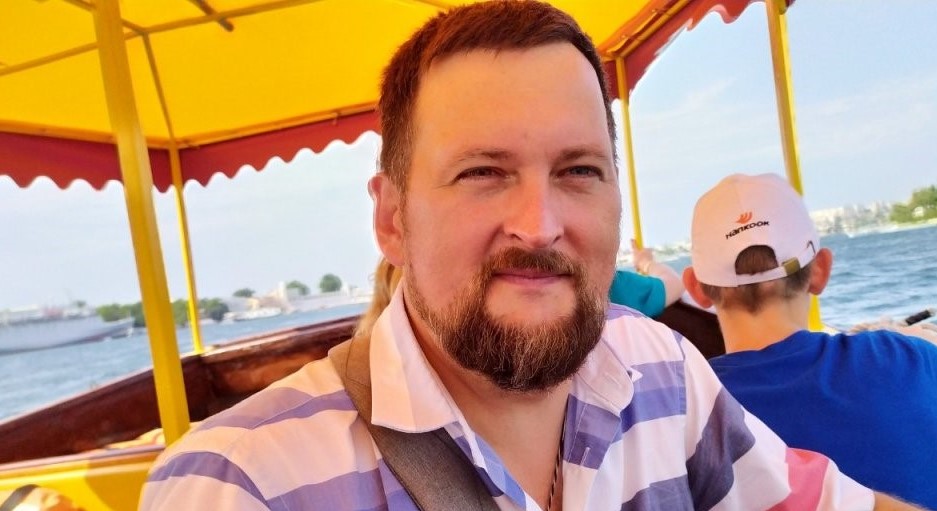 The FSB in Russian-occupied Crimea have seized another Ukrainian in extremely suspicious circumstances which give grounds for fearing another politically motivated arrest.

40-year-old Denis Kashuk set off for work in a Simferopol advertising agency on 17 December and vanished.  From 10.00 that day, his phone was unavailable.  That evening, after his wife, Olha learned that her husband had not come to work that day, she contacted the Russian-controlled police.

It is worth recalling how many civic activists and young Crimean Tatars have been abducted under Russian occupation or disappeared, with the occupation authorities doing nothing to investigate, and even refusing to accept the report of Crimean Tatar activist Ervin Ibragimov’s abduction.  Here, however, a police unit appeared at 22.00, took Olha Kashuk’s report of her husband’s disappearance, a photo and a toothbrush for a DNA sample.

It was only the following morning that the FSB arrived and carried out a search of the Kashuk home, and Olha was told that her husband was suspected of preparing explosives. The FSB removed technology and electronic storage devices.

On 19 December, lawyer Islyam Veliliaev visited Kashuk at the Simferopol FSB office.  Ominously he was told, first, that Kashuk had officially been detained on 18 December, and, secondly, that Kashuk did not want his services. In numerous cases involving Ukrainian political prisoners, such as Oleg Sentsov and Oleksandr Kostenko, the time of detention has been falsified, in order to not cover the period in which the men, according to their account, were subjected to torture. Virtually all the Ukrainians arrested have also been placed under heavy pressure to reject independent lawyers, with the Russian-appointed ‘lawyers’ generally there to sign papers and convince the detained person to ‘confess’ to the charges laid.  Lawyer Nazim Sheikhmambet reports that he and the family fear that Kashuk has been subjected to torture and other forms of physical pressure and that he was in a bad psychological state when he signed the paper rejecting an independent lawyer. It is likely that he will be remanded in custody on 20 December.

Kashuk’s cousin, Olena Huseinova has told Hromadske Radio that her cousin, with whom she is very close, is not at all political and that his interests focus around his family (the couple have a 2-year-old son). He was born and raised in Crimea, and although he tried living in Kyiv for a year, found it too alien and returned to Simferopol.

Too little is known to be able to draw any definite conclusions, however certain patterns are very clearly at play. One is the fact that a person facing serious charges has rejected the services of an independent lawyer, while under the total control of the FSB.  The latter are claiming to have arrested him over 24 hours after he disappeared.  Since the ‘police’ appeared with highly unusual alacrity following Olha Kashuk’s report of her husband’s disappearance, and took material for a DNA sample, it seems very likely that they were aware that he was in FSB custody the evening before he is supposed to have been arrested.

Unlawful methods have been used to obtain DNA samples from several Ukrainian political prisoners, with the samples then used to falsify evidence. In the trial of  Volodymyr Dudka and Oleksiy Bessarabov, for example, the prosecution claimed that the men’s biological traces had been ‘found’ on a map of the city which allegedly showed the places where acts of sabotage were planned.  In fact, an expert analysis showed that the traces were all on the edge of the map and not over the entire surface, which makes no sense if this was a map that the men were using.

The same type of falsification seems very likely against Oleh Prykhodko, a 61-year-old opponent of Russian occupation, who was arrested after the FSB claimed to have found explosives on his property.

In November 2018, Yunus Masharipov, a 54-year-old Crimean Tatar activist from Yalta, received a four-year prison sentence and 110 thousand rouble fine on charges of illegally preparing explosive devices.  Masharipov had, in December 2017, issued public statements to both Ukraine’s President at the time Petro Poroshenko and to Viktor Palagin, the then head of the Russian FSB in Crimea saying that he had been tortured into ‘confessing’ to these offences, after he said that he had informed organizations back in 2014 about violations of the rights of children, the disabled and pensioners.  Unusually, Masharipov won the cassation appeal against this sentence and a new trial began in December.  Masharipov himself has long been recognized by the authoritative Memorial Human Rights Centre to be a political prisoner.

It should be stressed that there is no evidence of any actual acts of sabotage or terrorism in Crimea, and all of these arrests and ‘trials’ of alleged ‘Ukrainian saboteurs’ are based on FSB claims and very questionable evidence.  They are, however, taken and embellished by Russian state and Russian-controlled media to create the impression of Ukrainian enemies seeking to carry out acts of sabotage, with Russia’s FSB stepping in to thwart them.