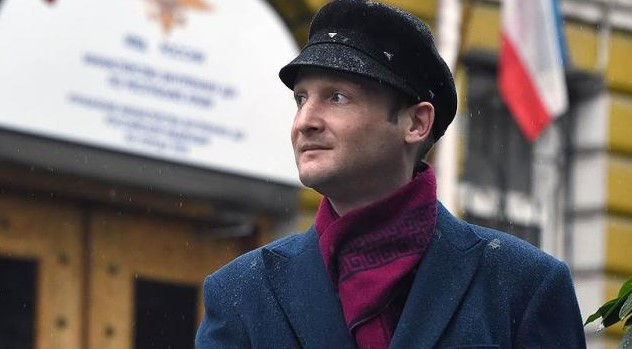 A Russian-controlled court in Yalta has ordered the deportation of journalist and blogger Yevhen Haivoronsky from occupied Crimea.  The move on 20 December came just hours after police officers detained Haivoronsky and removed his Russian passport, and less than a month after the same ‘judge’, Boris Gorbov, fined him for a Facebook post critical of Russian President Vladimir Putin.

According to his lawyer, Alexei Ladin, Haivoronsky will now be imprisoned in a temporary unit for ‘foreign nationals’ in the Krasnodar region of Russia until his appeal against the forced deportation is heard.

The occupation court’s deportation order claims that Haivoronsky received his Russian passport with infringements and that it is for this reason that the citizenship is being revoked.  In an especially cynical move, ‘judge’ Gorbov even fined him two thousand roubles for supposedly being “in the Russian Federation” without documents confirming his right to be there. Haivoronsky rejected the charge, and referred to the fact that in international law Crimea remains illegally occupied Ukrainian territory.

The ruling is undoubtedly in breach of Article 49 of the Fourth Geneva Convention.  This clearly stipulates that “Individual or mass forcible transfers, as well as deportations of protected persons from occupied territory to the territory of the Occupying Power or to that of any other country, occupied or not, are prohibited, regardless of their motive.”

The occupation authorities have not even tried to come up with a plausible pretext for Haivoronsky’s forced deportation which, like the previous administrative prosecutions over the last nine months, are very clearly linked with the blogger’s public statements and comments on social media about Putin and Russian occupation of Crimea.

This deportation order may confirm the suspicion that Russia was slow to bring the kinds of criminal charges it has against other outspoken journalists and activists because of Haivoronsky’s earlier support for annexation.  As once the Soviet regime tried to present those who criticized their ‘socialist reality’ as mentally ill, the occupation authorities first tried to treat Haivoronsky as a ‘drug addict’.  They have presumably now decided that their best way out is to send him back to mainland Ukraine.

Haivoronsky, who is originally from Donetsk, came to Crimea in 2013 and initially welcomed Russia’s invasion and annexation, even praising Putin.  He later joined ‘Primechania’ which Haivoronsky calls an opposition paper for its criticism of the local authorities.  Although ‘opposition’ seems much too strong a term, Primechania was possibly the only Crimean publication to have written about the Armyansk chemical spillage and the pressure and threats against Armyansk mothers to stop them talking about grave consequences for health.

On 6 March 2019, a search was reportedly carried out of Haivoronsky’s home, with documents, computer and electronic devices removed.  Pro-Russian blogger and activist, Ilya Bolshedvorov reported at the time that Haivoronsky had been tested for drugs or alcohol in his body, with nothing found.

By 22 March, in an article entitled “A patriot whom we have lost’, Primechania announced that they would no longer be publishing any texts by Haivoronsky due to his pro-Ukrainian statements.

On 23 October, Haivoronsky was jailed for 15 days, with the official reason being that he was refusing to undergo ‘treatment’ for the drug dependence that the occupation authorities claim that he has, but that he himself denies.

Then on 25 November, ‘judge’ Gorbov found Haivoronsky guilty of ‘petty hooliganism’ over a Facebook post on Putin’s birthday (7 October). He was fined 30 thousand roubles, supposedly for his use of “an unprintable swearword”.

The post in question had called Putin ‘khuylo’ or ‘dickhead’.  The text, which is now unavailable, stated the following:

Public acknowledgement that Crimea is occupied Ukrainian territory has already resulted in journalist Mykola Semena receiving a 2.5 year suspended sentence and others facing persecution, and is now almost certainly the reason for Haivoronsky’s deportation.