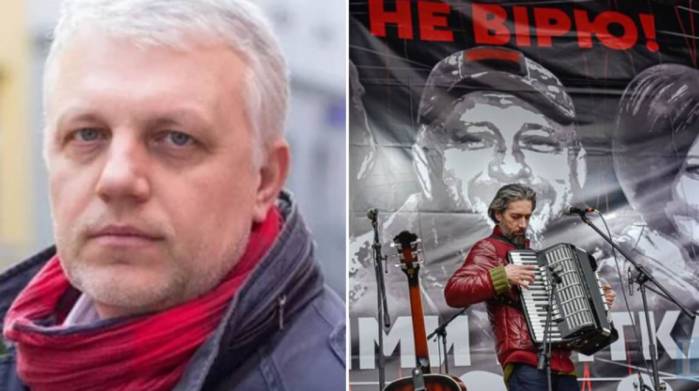 Two weeks have passed since the police used a press briefing, attended by Ukrainian President Volodymyr Zelensky, to announce five arrests in connection with the murder in July 2016 of prominent journalist Pavel Sheremet.  With the investigation into the killing undoubtedly of public concern, and the two main suspects named as paediatric surgeon and military volunteer Yulia Kuzmenko and well-known musician and war veteran, Andriy Antonenko (Riffmaster), the arrests were always going to make the headlines.  Concern, however, remains unabated over the flagrant violation of the suspects’ right to the presumption of innocence and both Antonenko and Kuzmenko have filed defamation suits.  Doubts are also mounting about the police evidence to back the charges behind the crime and the alleged motives, with these only increased by other public pronouncements made on television by Interior Minister Arsen Avakov.

In two separate appeals, over 80 members of PEN Ukraine in one case, and prominent Ukrainian human rights activists, academics and politicians in the other, have expressed outrage over the police briefing on 12 December, at which not only President Zelensky, but also Avakov and the Prosecutor General Ruslan Riaboshapka were present.  The participation of so many high-profile figures is clear manipulation of public opinion, and Zelensky’s presence can be viewed as political pressure on the investigation.  With such high-ranking figures involved, investigators could easily find it inconvenient if evidence proves that the allegations were false.

There is nothing abstract about this.  Back in 2010, then President Victor Yanukovych demanded on TV of the Interior Minister and Prosecutor General that an explosion in a Zaporizhya church “be solved” within a week.  Three young men were savagely tortured and then spent three and a half years in custody as a result of attempts to achieve ‘results’ in that timeframe.  Any hopes that the situation has radically changed are muted by the first arrest over the fatal attack on Kherson activist Katya Handziuk in 2018. The person was released only after journalists forced the enforcement bodies to consider a watertight alibi that they were dismissing. The other reason why optimism is difficult is that Serhiy Vovk, the judge now involved in remanding Kuzmenko and Antonenko in custody was himself very directly involved under Yanukovych in the politically motivated imprisonment of Yuri Lutsenko and Vasyl Ivashchenko.

The authors of one of the above-mentioned appeals point out that the suspects were called criminals during the 12 December briefing, with the Prosecutor General having even called them “established killers”. They note that there is considerable public scepticism about the evidence presented and that the publicity has done immeasurable damage not merely to the reputation of the suspects and members of their families, but also to the Ukrainian Armed Services and the volunteer movement.

While the members of PEN Ukraine were appealing specifically to the Human Rights Ombudsman, Lyudmyla Denisova, asking her to take the case under her control, the authors of the other appeal propose the creation of a parliamentary committee  to ensure full objectivity.

They also believe that the case should be passed to the courts soon, and say that after well over three years, there is little chance of finding new decisive evidence.

That, however, is not the impression that has been given since the briefing by Avakov and by a police spokesperson.

During Savik Schuster’s TV talk show ‘Svoboda Slova [‘Freedom of Speech’’] Avakov  for example, was asked whether the SBU [Ukrainian Security Service]  were implicated in the crime.  He replied that “there are people who are for the moment outside the screen, beyond the pattern of charges, who were the initiators and co-initiators of the crime”.  He went on to insist that the investigation is not complete, and is only in the first phase.

There have been allegations that people in the SBU were involved in following Sheremet and in removing video footage since the publication of a report in May 2017 by Slidstvo.info, in cooperation with OCCRP (the Organized Crime and Corruption Reporting Project).

Avakov confirmed that some video footage had gone missing. He asserted that the investigation had been classified back in 2017 because the police suspected that somebody was giving information to the suspects.

If by suspects, he means the three people who have now been charged: Antonenko, Kuzmenko and Yana Dugar, a military nurse, it is difficult to understand why the arrests were only made now, and why Avakov still says that the investigation is at the first stage.

Worryingly, Avakov also presented new photos of a woman who, he says, detonated the bomb under Sheremet’s car.  He said that they have some thoughts about who this person is, but do not know definitely.  According to Ukrainska Pravda, this contradicts material presented during the detention hearing on 14 December, which asserted that Kuzmenko is alleged to have detonated the bomb.

On 17 December, Interior Ministry spokesperson Artem Shevchenko stated, quite correctly, that whatever is written in the notification of suspicion is, in terms of legal force, only supposition. The continuation was rather unnerving: “The suspicion can be changed, supplemented, cancelled. Perhaps it was that woman (Kuzmenko), but perhaps not”.

This was five days after the press briefing which, Kuzmenko has said, ended her career as a paediatric surgeon.  She commented in court that it was most upsetting that she had been in the operating theatre during the press briefing that “made her into a killer”.

Avakov did assert that the killing had been planned in a way that was “mega-well-considered and precise”. How he knows this, while so much else about the charges remain fluid, is unclear.

The lawyers representing Kuzmenko and Dugar have both asserted that their clients have alibis.  In Kuzmenko’s case, her ex-husband has testified that she was definitely home during the night from 19-20 July 2016, with this ignored by the court.  Even assuming that the investigators are right that there is no direct proof that she was home during that night, the timing would certainly seem strange.  It was only on 19 December that her parents brought her son back to Kyiv from a holiday in Turkey.  Less than 24 hours later, she is alleged to have been out at night, planting a bomb, together with Antonenko.

Slidstvo journalists have analysed the expert analyses which were presented as key evidence on 12 December, and believe that they are not especially conclusive.  Kuzmenko herself questioned the validity of the forensic gait analysis, carried out by a British scientist, Ivan Birch, pointing out that the gait of a person carrying a five-kilogram weight (the bomb) would be different from that same person’s gait without it.  Yet Birch was given video footage of the person believed to have been carrying the bomb and of her where she was not carrying any weight.

Antonenko has also been dismissive of these assessments, noting that his beard and his ears are both recognizably different from the individual in the critical footage, and that his arms are covered in tattoos, unlike the person on the video footage..

The claim during the press briefing that the motive had been to destabilize the situation in the country was one of the points which Sheremet’s colleagues at Ukrainska Pravda, expressed scepticism over  that same evening.

It got worse during the detention hearing when it transpired that Antonenko was accused of being the organizer of a group which was allegedly obsessed with ultranationalist ideas and wanted to achieve the supremacy of the Aryan race, and division of society according to nationality.  It is alleged that the murder was aimed at drawing attention to these views.

The first problem is that it did nothing of the sort.  There were no attempts to link the crime with any such diseased aims, and the far-right activists whom Sheremet had been probing before his murder were swift to deny any role in the crime.

The second was angrily articulated by Antonenko during the hearing on 14 December.  He said that he had grown up in a Jewish neighbourhood and is himself half-Jewish. The investigators had thus insulted both him and his family with their allegations.

It was, and remains, unclear what role in all of this the first two people arrested are supposed to have played.  This is despite the fact that Ukrainska Pravda pointed to a possible connection with the Sheremet case after the arrest of Inna and Vladyslav Hryshchenko, former volunteer fighters from the nationalist ‘Right Sector’ back in November 2019.  The briefing spoke of their DNA having been found on an explosive device, although this appears to have been a separate device and they have not been charged as yet over Sheremet’s murder.  Of particular concern is Vladyslav Hryshchenko’s assertion that an investigator suggested that he admit to Sheremet’s murder, in exchange for which his wife would be released from detention.

There seemed clear efforts during the press briefing to point to Hryshchenko’s criminal record and alleged enrichment by the other suspects.  Since the motive being claimed is ideological, such details seem to have been added to create a bad impression of the persons detained, rather than serving a legitimate purpose.

During the above-mentioned talk show, Avakov also reported that Antonenko had made a phone call before the search asking his brother-in-law to take an MON-50 mine from his flat.  This was presented as further ‘proof of guilt’.

In fact, Oleksiy Nikiforov, a representative of the Special Operations Forces and colleague of Antonenko’s, has said that the mine had been deactivated, with the explosives removed, in order to use it for photo shots which were posted on social media.

As of 25 December, the lawyers representing Antonenko and Kuzmenko have both announced defamation suits.  Kuzmenko’s is specifically against Avakov and the Ukraina TV channel over a false claim during the Shuster show. Antonenko’s suit is against Zelensky, Avakov, Riaboshapka and the Deputy Head of Police, Yevhen Koval over the violation of the presumption of innocence during the 12 December briefing.

None of the above is intended to express an opinion as to whether those charged are guilty or innocent.  The problem is, however, that the fundamental right to be presumed innocent, until proven guilty was flouted very publicly, with ‘evidence’ presented that certainly leaves multiple questions unanswered.