Suspected Maidan Berkut killers freed on eve of Donbas hostage exchangeRelease of suspected Maidan killers in prisoner exchange will help Russia destabilize UkraineEx-Berkut officer accused of mass Maidan killing released from detention33 Maidan crime suspects still work in law enforcement bodies, 10 in high positionsKey evidence against Maidan killers in danger of being destroyedWhy is Lutsenko trying to destroy the only department truly investigating Maidan crimes?Russian-controlled Donbas militants seize pensioner and his familyUkrainian tortured in Donetsk concentration camp, then sentenced to 10 years in Russia Will anyone answer for the killings on Maidan?Ukraine imposes sanctions on pro-Russian MP Medvedchuk & his wife. What about criminal proceedings?Fake ‘Ukrainian fascist’ arrested and charged with working for Russia and its proxy Luhansk ‘republic’ Prisoner exchanged for Ukrainian hostages gets 17-year sentence in Russian proxy Luhansk ‘republic’Putin threatens to increase Russia’s ‘support’ for occupied DonbasMPs challenged to fight Russian repression by adopting a Ukrainian political prisonerRussia sentences Ukrainian political prisoner to 10 years after abducting him from DonbasOpinion on the political motives of criminal persecution and violation of human rights in the case of Sergiy PashinskyRussia foists negotiations with Donbas proxies on Ukraine via fake Minsk Agreement roadmapKremlin hostage tells Russian court how he was tortured in occupied Donbas & abducted to RussiaUkraine takes vital step towards trial in absentia of suspected Maidan mass killersRussian proxy Donbas ‘republic’ threatens to hold hostages until Ukraine agrees to fake elections
• Topics / The right to liberty and security 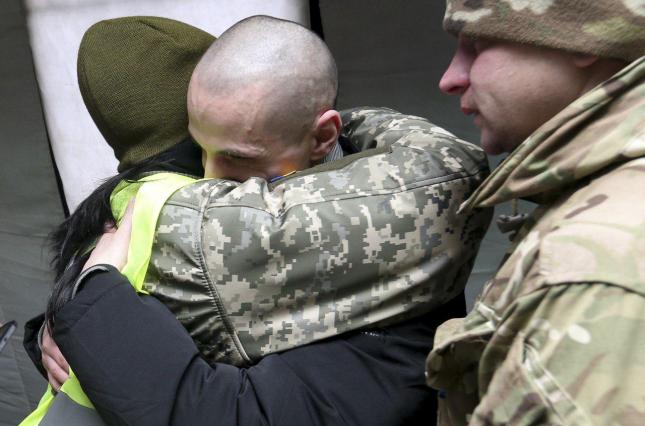 The exchange, originally agreed between the Presidents of Ukraine and Russia at the 9 December Normandy Summit, is over and the Russian-controlled Donbas ‘republics’ have handed over 12 Ukrainian prisoners of war and 64 civilian hostages.* Russia’s interpretation of the Minsk demand that prisoners are released “all for all” has always been highly specific, and there the 80 Ukrainians freed were in exchange for 127 prisoners handed over to the so-called ‘republics’.  Frustration and anger over the release of suspected Maidan killers, terrorists and others were always tempered by awareness of the hell many of the hostages were going through and the families longing for their release.

Among those who have finally returned home are Serhiy Glondar, whose wife learned she was expecting their second child the day he and Oleksandr Korinkov was taken prisoner after Russian President Vladimir Putin’s deceit at Minsk over the Battle of Debaltseve.  Both men had been imprisoned since February 2015, with Bohdan Pantyushenko, another military man, held even longer. Among the civilian hostages released are two journalists – Stanislav Aseyev and Oleh Halaziuk.  Both men were clearly imprisoned, and Aseyev ‘sentenced’ to 15 years, because of their honesty when writing about life in the self-proclaimed ‘Donetsk people’s republic’ [DPR].  According to the SBU [Ukraine’s Security Service], 17 of the hostages had been held prisoner since 2015/16.

Moscow is illegally holding at least 87 political prisoners in occupied Crimea and Russia, the majority of whom are Crimean Tatars.  Since 2017, the Russian occupiers have been systematically persecuting Crimean Tatar civic activists and journalists, and at very least 35 activists have either received or are facing monstrously long sentences, essentially for their civic position.

Since the last exchange of Ukrainian political prisoners, Russia has seized at the very least two more hostages: Oleh Prykhodko and Denis Kashuk

Ukraine’s Representative on Crimea has stated that none of these political prisoners are forgotten and that efforts to release them are underway.  Optimism is difficult, especially since the Kremlin openly uses prisoners as hostages and demands a huge ransom.  It is becoming difficult to see whom Ukraine can still hand over.

There are also a very large number of hostages in occupied Donbas who have not been returned.  According to Valeria Lutkovska, Ukraine’s Representative in the Contact Group on Donbas, there are at least 300 people awaiting release, of whom only 100 have been confirmed by the militants and have documents. They include the following.

Marchenko was recently declared  political prisoner by the renowned Memorial Human Rights Centre. He is imprisoned in Russia after the ‘DPR militants’ closely collaborated with Russia’s FSB [security service). He is charged in the Russian city of Krasnodar with illegally transporting military items from the Russian Federation, which is especially cynical since the 48-year-old Ukrainian was savagely tortured after returning to Donetsk to try to retrieve the car he had left when they fled in 2014 and then forcibly abducted from Ukrainian territory.

54-year-old Valery Matyushenko has been imprisoned in ‘DPR’ since 15 July 2017.  The family had never concealed their pro-Ukrainian views, and shortly after Matyushenko disappeared, his wife Tatyana was directly warned that she would be next, and their son would end up in a children’s home.

According to the East Human Rights Group, Serhiy Rusinov, a young student from Luhansk, was seized on 24 August 2018 and, at least in August 2019, was imprisoned in the self-proclaimed ‘Luhansk people’s republic’, with the charges against him and his ‘sentence’ probably due to his pro-Ukrainian views.  It was asserted by the so-called ‘LPR ministry of state security’ that Rusinov was the organizer of a pro-Ukrainian terrorist group and actively supports pro-Ukrainian views.  Human rights activists believe he was targeted because he often clicked ‘like’ on posts expressing pro-Ukrainian views on social media.

It was reported in December 2018 that Sahaidak had been ‘sentenced’ in ‘LPR’ to 13 years’ imprisonment with full confiscation of his property, after around 18 months’ imprisonment and after the militants also seized his father for some time.

Roman Sahaidak, now 31, is a Krasnodon entrepreneur whose problems began soon after he refused to sell his part of the business to his then business partner, Oleksandr Ryasnoy.  The latter had offered a very bad deal and, according to his sister, Sahaidak was also wary of Ryasnoy, in part for his willingness to denounce people to the so-called ‘LPR ministry of state security.  They had apparently agreed, around two weeks before Sahaidak was seized, that they would no longer work together.

The then 29-year-old was stopped on June 30, 2017 by armed men in military gear who forced him into their car.  It seems that Ryasnoy had a relative in the so-called ‘LPR ministry’ whom he turned to after not getting his way regarding sale of the business.

The militants first tried to charge Sahaidak with a terrorist act that took place a week after he was seized. Here, as over his initial disappearance, it was the publicity that made the ‘LPR ministry’ understand that such charges were too hopelessly flawed.  They later began accusing him of ‘fraud’ or, alternatively, ‘extortion’ with respect to Ryasnoy.

The most chilling silence is over this 28-year-old about whom nothing has been heard since ‘DPR’ militants brought him, covered in blood, to his grandmother’s home and carried out a search, supposedly for explosives.  None were found, however Sinchenko was taken away again and his mother has no information as to where the militants are holding him.  It is believed that the DPR’s so-called ‘ministry of state security’ suspect Sinchenko of involvement in the blowing up of a Donetsk radio tower on 27 October 2019 .

One of the hostages just freed, Vasyl Savin mentioned Korsun as one of the men he had left behind in the Makiyivka maximum security prison.  Others were Serhiy and Dmytro Karaberyush; Serhiy Mazurov; Oleksandr Shelest; Volodymyr Sinyukov, as well as Maxim Timofeyev.  The latter, who has second group disability status was not released, though his mother, who is in a wheelchair, was.  Savin also mentioned Hennady Matviychuk, a miner who, he says, has a broken back, with a metal insert for a part of the spine which is missing.  He mentioned three other names, though only their surnames: Tverdy, Samdurov and Matyushenko (see above).  Some of the men had been on the exchange list, yet were suddenly removed.

Savin also confirmed what the militants deny but many other witnesses have also spoken of, namely the existence of secret prisons. He said that in the latter, it’s like in the middle ages, with torture and confessions beaten out of people. “When Putin lies that they don’t have their prisons there, I feel like spitting at the screen.”

He mentioned also that the information blockade is another instrument for influence that Russia uses and says that they try to listen to Ukrainian media.  He stresses how important it is that the latter mention them, that there are hostages there (in occupied Donbas) every day. They get beaten for it but they do hear this, he explains.  Savin had been in captivity since May 2015.

The above are still only a few of the people held prisoner..  It is also important to bear in mind that in both Russian proxy ‘republics’ and in Russian-occupied Crimea, the persecution is ongoing, and new ‘arrests’ guaranteed.

*  Four of the people released have families in occupied Donbas, and chose to remain there