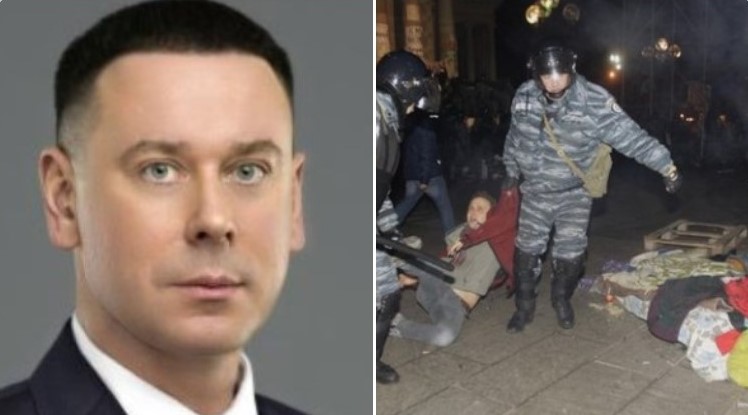 The families of slain Maidan activists and their lawyers have called on the acting head of the State Bureau of Investigations to cancel the appointment of Oleksandr Buryak as head of the department on investigating crimes against Maidan protesters.  They are outraged that the appointee has no experience of working on Maidan cases and that the procedure was carried out without any transparency or clarity as to the criteria used in choosing the successful candidate.  Their concerns do not end there as Buryak’s name came up in a recent scandal involving Pavlo Vovk, President of the Kyiv District Administrative Court and some other judges.

Buryak was previously Deputy to the recently dismissed Head of the State Bureau of Investigations [SBI], Roman Truba. News of his appointment came on 2 January and flew in the face of appeals from Maidan activists and lawyers to consult with them in order to ensure continuity of all Maidan investigations handed over to SBI and to only appoint people with experience after open procedure. Instead, they say, Buryak was chosen, a man with no experience of Maidan cases, no achievements in other cases, but with a dubious reputation.

In their appeal, the Advocacy Advisory Panel and an NGO representing the families of murdered activists point out that Buryak is mentioned on the National Anti-Corruption Bureau [NABU] wiretapped conversations from Pavlo Vovk’s office at the Kyiv District Administrative Court.  They write that these show that Vovk is on such close relations with Buryak that he can, via a phone-call, get the ruling or investigative actions they need from SBI.  The tapes, for example, include a conversation involving Vovk and the appointment of Yevhen Ablov as head of the Mykolaiv territorial SBI.  These conversations were intercepted specifically in investigating Maidan cases. “In addition, a number of judges from the District Administrative Court are themselves figures in key prosecutions over the dispersal of Maidan and passing of wrongful court rulings.  It is specifically SBI that will continue investigating the case where the likely person facing charges will be Yevhen Ablov, a person close to Vovk.”  This, they stress, indicates that Buryak will have a real conflict of interests placing in jeopardy the objective investigation of crucial Maidan cases.

The above “make constructive cooperation between victims and the management of this department impossible and will have an extremely negative impact upon public trust in the investigation into Maidan cases.  Without this, it will be impossible to effectively investigate and achieve justice.”

The authors of the appeal place the responsibility for this squarely on Iryna Venedictova, appointed acting head of SBI following President Volodymyr Zelensky’s dismissal of Truba.  They call on her to cancel the appointment and to announce an open and transparent competition for head of the Maidan investigations department within SBI. Preference should be given to candidates who have experience of Maidan investigations, an unmarred reputation and who have gained the trust of victims and the public.

As reported, on 26 July 2019,  NABU and the now dissolved Special Investigations Department investigating Maidan crimes reported that Vovk and three other judges were suspected of extensive wrong-doing.  At a press briefing that day, wiretapped conversations were played which appeared to point to machinations and dodgy court rulings passed to ensure removal of certain members of the High Qualification Commission of Judges [HQCJ].  This body has a critical role to play in ensuring (or blocking) judicial reform, particularly through the qualification assessments that it makes of judges. Any machinations to fill the posts therefore clearly has wide-reaching ramifications.  The makeup of the Commission was of direct interest to Vovk who received a negative assessment from the Public Integrity Council which could only be ignored with the support of a two-thirds majority of the members of HQCJ.

Although the investigation into the very incriminating allegations does not appear to have been terminated, the allegations have not thus far resulted in any difficulties for the above-mentioned judges.  They, and the District Administrative Court, are well-known for judgements many have considered questionable.

Although the removal of investigative powers from the prosecutor’s service in Ukraine has generally been welcomed, Maidan victims and lawyers began sounding the alarm several months ago over the dissolution of the Special Investigations Department and failure to ensure continuity of Maidan cases.   Thus far virtually all fears and concerns about the fate of the Maidan investigations have proven entirely warranted.