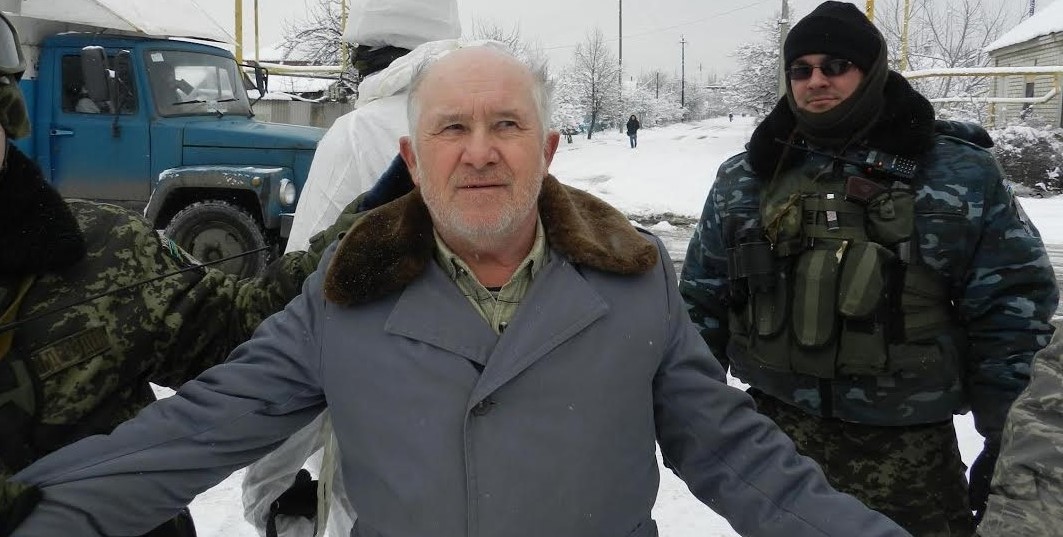 Among the ‘terrorists’ mentioned by many Ukrainian media as having been handed over to the Russian proxy ‘Luhansk people’s republic’ [LPR] on 29 December 2019 was one man who had spent almost five years in a Ukrainian prison for a crime he probably did not commit.  It is quite possible that the ‘terrorist act’ that 69-year-old Mykola Ruban was convicted of never actually happened, which is only one of the disturbing similarities with Russia’s trumped up prosecutions of Ukrainian political prisoners.

On 30 March 2016, Mykola Ruban was sentenced to 15 years’ imprisonment for an alleged act of terrorism.  It was claimed that at the beginning of 2015, he had brought a jar of honey containing explosives to the checkpoint at Stanytsa Luhanska, and that a soldier had died and two others had received injuries as a result of the explosion.  Ruban has consistently denied the charges, however the sentence was upheld at both appeal and cassation levels.  His guilt, and indeed the crime itself, have, however, been questioned by Kharkiv Human Protection Rights Group lawyer Hennady Tokarev and Yuri Aseyev, a journalist formerly from Luhansk, who closely followed the case while working for KHPG.

Ruban was arrested a month after the (alleged) explosion by SBU [Security Service] officers and soldiers from the Chernihiv Police Battalion  It was claimed that he was detained while trying to cross a checkpoint, carrying a 2-litre pot of honey; an artillery fuze and a TNT detonator to use in a terrorist attack. The SBU asserted that he had been acting on the instructions on people from GRU [Russia’s Military Intelligence] who had provided him with the explosives and firearms.

According to Aseyev, it was clear from the outset that the case against Ruban had been falsified.  He says there were no expert assessments or other serious documents, and the printouts provided had neither been signed, nor stamped.

It was alleged that Ruban had hidden the honey jar, containing explosives, on him, however Aseyev notes that on the photograph taken of his arrest, you can see that his jacket was tight-fitting and he could not possibly have hidden anything under it.

The verdict asserts that Ruban, having already ripped the safety lever off the grenade at around 10 a.m. offered the honey to the soldiers at the checkpoint about an hour later.  After they refused it, he allegedly placed it on a bench and left.  In fact, the jar was opened twice, yet the explosion allegedly only came the second time, at approximately 14.00.  Aseyev is deeply sceptical, believing it most unlikely that a grenade could have taken almost four hours to explode after the safety lever had been removed.

Tokarev has also pointed to several instances where evidence was falsified. At least one of the ‘witnesses’ whose testimony was used to convict Ruban had actually been in Kyiv at the time of the explosion.

One of the soldiers also claimed to have recognized Ruban as the man who brought honey to the checkpoint although his shift had begun three hours after this had allegedly happened.  The same ‘witness’ asserted that the soldier killed had before death repeated several times that “an old man” had brought the jar with honey and that the soldiers had immediately understand which old man (out of the very many crossing at Stanytsa Luhanska) had been meant.

The identification parade had also been highly irregular since the other men were all very different from him.

It also appears that an investigative team only arrived a day and a half after the explosion when all traces of it had been cleared away. This may be the reason why no remains of the alleged explosive were found.

There may be another explanation.  Aseyev suggests that the entire story with the honey was made up.  In 2016, they spoke with a person who said that he had been near the checkpoint on the day of the explosion and that the soldiers had been engaged in drunken revelry.  As part of a monitoring mission, Aseyev later spoke with local residents who confirmed that the soldiers had been drinking and who asserted that a shot had been fired from a grenade thrower.  Aseyev believes that after it killed a man and injured two others, they decided to make up the story of an explosion to cover up the real cause of the death.

Ruban was held in custody illegally for 8 days before being officially remanded in custody.  He stated in court that on the day of the soldier’s death, he had been at home in the village of Mykolayivka and had not gone near the checkpoint.  He said that on the day that he was arrested, he had been crossing into government-controlled territory in order to receive his pension.

He also asserted that after being arrested by the SBU and the Chernihiv Police Battalion, he had been tortured and had on several occasions lost consciousness.  A woman held by this same Chernihiv battalion has recounted seeing him (“that old man convicted over a honey pot at the checkpoint” and confirmed that he had been badly beaten.  He was almost naked and barefooted, and “was crying all the time and asking them to explain why they’d arrested him”.  She said that they had come every two hours “to beat him”.

The SBU promised that he would be exchanged if he admitted the charges.  Despite constant efforts to get him included on the exchange list, it took almost five years of imprisonment for the elderly man to be finally released in the 29 December exchange.

There is likely to be a sequel to this, as Tokarev had earlier applied to the European Court of Human Rights on Ruban’s behalf.

Based mainly on information from the article by Denys Volokha An old man with a honey pot: why Ukraine probably exchanged an innocent person