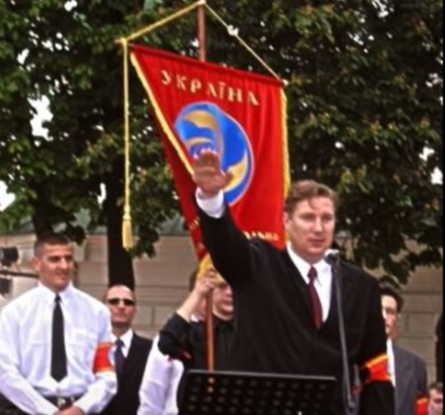 While Russia’s insistence on the inclusion of a crucial MH17 witness, suspected Maidan killers and convicted terrorists in the last two prisoner exchanges gained warranted attention, the inclusion of Edward Kovalenko in the last exchange of prisoners in occupied Donbas was also highly telling. Russia has constantly demonized all Ukrainian nationalist organizations as ‘fascist’, so why, you might ask, would it demand that Ukraine release the former leader of one of the most notorious of such organizations?

The answer, in fact, lies in Kovalenko’s obvious paymaster since at very least 2015, however it is worth first considering his supposedly ‘nationalist’ roots.  Kovalenko is described by well-known journalist Denis Kazansky as having been one of the leaders in the 1990s of the far-right nationalist UNA-UNSO [the Ukrainian National Assembly – Ukrainian People’s Self-Defence].  That organization was already involved in many controversial protests, however Kovalenko’s real claim to notoriety came in 2002 when UNA-UNSO collapsed, with different breakaway groups forming.  Kovalenko created his own apparently far-right group, UNA Kovalenko.  It was this organization, Kazansky notes, that represented the true fascism which Russia uses “to frighten children and credulous pensioners with”. Unlike all the other Ukrainians whom Russia calls ‘fascists’ for upholding Ukrainian independence, and speaking Ukrainian, Kovalenko had the advantage of genuinely appearing to fit the fascist mould. He was a pure gift to Russia with his anti-Semitic pronouncements, his ‘Sieg Heil’ salutes, etc.  Anton Shekhovtsov, a researcher into far-right movements, reported back in 2014, that Kovalenko had played a critical role during the summer of 2004 in trying to associate presidential candidate Viktor Yushchenko with the far right, anti-Semitism, etc.  Despite opposition from the Yushchenko team, Kovalenko organized a march which purported to be in support of Yushchenko’s candidacy.  At a meeting after the march, Kovalenko declared:   "We, the right-wing nationalist party, are supporting the only one candidate from the right-wing forces: Viktor Yushchenko. One Ukraine, one nation, one people, one president!". And he gave a Hitler salute.”

It was clear to many commentators back then that Kovalenko was a provocateur, and a real nationalist leader suggested that the march had been organized (and obviously financed) by Viktor Medvedchuk, then the Head of Leonid Kuchma’s Presidential Administration.  Medvedchuk was and remains a close associate of Russian President Vladimir Putin who very openly, as well as covertly, supported Kuchma’s intended successor, Viktor Yanukovych.  Medvedchuk’s role over the 15 years since then has changed considerably, though has never ceased to cause concern.  Even if it was Medvedchuk, whose own political party, is notorious for its anti-Semitism and homophobia, that organized Kovalenko’s ‘rabid fascism’, the photos were undoubtedly useful for Russia’s anti-Yushchenko and anti-Ukrainian propaganda.

In his commentary, Kazansky calls this “brilliant”.

“Russians (as represented by Putin’s crony) hire a bloke in Ukraine to march under SS banners, make Sieg Heil gestures and stir up inter-ethnic enmity, and then point at him and shout “Look at Ukrainian fascism!”.  And now they say, “Well OK, so be it, this was our bloke and we’ll take him back”.

While Russia has claimed that the 29 December exchange was purely between Ukraine and the so-called ‘Donetsk and Luhansk people’s republics’, it was first agreed during the meeting on 9 December 2019 between Putin and Ukrainian President Volodymyr Zelensky.  Few would, in any case, dispute that it is the Kremlin and its people who make all decisions regarding the release of prisoners and inclusion of people to be handed over to Russia / the Russian-controlled ‘republics’.

Russia could easily hope that Kovalenko’s former persona had been forgotten, especially since his activities after Russia’s invasion of Crimea and military aggression in Donbas were quite different.

As reported, Kovalenko was sentenced to five years’ imprisonment in May 2017 on charges of obstructing the legitimate activities of Ukraine’s Armed Forces and other military formations (Article 114-1 of the Criminal Code). He was charged with organizing an anti-mobilization rally on 27 January, 2015 and the ultimatum expressed at it, that if mobilization did not stop in Ukraine, the protesters would block roads and seize control of the military recruitment office, police and administrative buildings.  Kovalenko’s attempts to block mobilization coincided with the major offensive by Russian soldiers and Russia-backed and heavily armed fighters aimed at capturing Debaltseve in Donetsk oblast.

Kovalenko’s other activities in recent years are also in jarring contrast to his erstwhile ‘nationalism’.  In November 2016, he gathered signatures for an appeal to the Russian-installed ‘leader’ of occupied Crimea, Sergei Aksyonov.  The latter was supposed to write to Putin, asking him to help provide the Kherson oblast city of Henichesk with gas.   In his interview to Krym.Realii, Kovalenko had dropped all pretence of patriotism and was critical only of Ukraine’s “pseudo-leaders”.

While Kovalenko is, to date anyway, the only supposed ‘Ukrainian nationalist’ whose release “from Ukrainian persecution” Russia and its proxy ‘republics’ have demanded, UNA-UNSO was led in the 1990s by the even more notorious provocateur Dmytro Korchinsky, who was reportedly a KGB agent back in Soviet times.   While the Kremlin, or its friends, like Medvedchuk, were engaging individuals like Kovalenko to push their narrative on ‘Ukrainian nationalism’, the Kremlin and various far-right Russian organizations, especially that of fascist ideologue Alexander Dugin, were heavily involved from as far back as 2006, in recruiting and training Ukrainians with pro-Russian and right-wing views in Donbas, Crimea and, doubtless, other parts of Ukraine.  While Russia tried to present Ukraine’s post-Maidan leaders as ‘fascists’, it was in Donbas that most of the militant leaders, whether Ukrainian or Russian, were known for their far-right, sometimes neo-Nazi views.