Desperate plea to Zelensky from relatives of hostages once again forgottenRussian proxy Donbas ‘republic’ jails 23-year-old Ukrainian student for social media ‘likes’ and pro Ukraine viewsUkraine’s religious freedom crushed in Russian proxy Donbas ‘republics’Prisoner exchanged for Ukrainian hostages gets 17-year sentence in Russian proxy Luhansk ‘republic’ECHR slams Ukraine for failing to acknowledge and punish religious hate crimesJehovah’s Witness faces years in prison for practising his faith in Russian occupied CrimeaFour Jehovah’s Witnesses imprisoned for their faith in Russian-occupied CrimeaUkrainian hostages not forgotten but Russia understands only the language of ransoms and sanctionsEmpty promises from Ukraine’s leaders as release of Kremlin’s hostages ‘buried’Russia’s fake ‘Ukrainian fascist’ returns to Ukraine to fight against ‘fratricidal’ war in DonbasWhy expel Russians ‘planning crimes for the Kremlin’ when Russia holds so many Ukrainian political prisoners?Six-year sentence for worship in dramatic escalation of religious persecution in Russian-occupied CrimeaRussia makes talking about the Bible an ‘extremist activity’ in occupied CrimeaJehovah’s Witness in Russian-occupied Crimea gets 6 years for ‘undermining state security’ by praying at homeUkrainian researcher tortured & sentenced to 13 years for ‘treason’ against a fake Russian proxy republicPOWs tortured for defending Ukraine in Donbas and for Russian propagandaWhy is Ukraine letting Donbas militant escape justice for Izolyatsia secret prison war crimes?Mounting religious persecution as Russia imposes monopoly on faith in occupied CrimeaPrisoner exchange leaves most Donbas hostages in captivity and makes journalists suspiciousDesperate plea to Zelensky from relatives of hostages once again forgotten
• Topics / The right to liberty and security 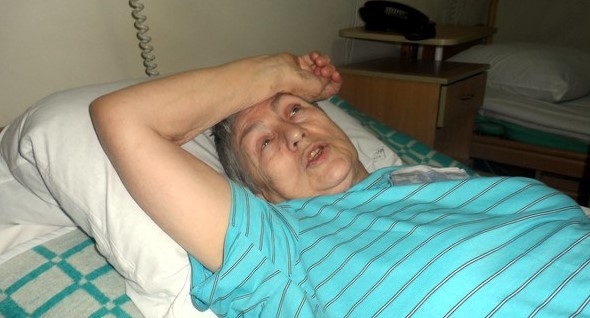 71-year-old Zinaida Maltseva spent 19 months imprisoned in the self-proclaimed ‘Donetsk people’s republic’ despite the lack of any grounds and her severe disability, which makes it impossible for her to walk without a wheelchair or crutches.  She was finally released as part of the prisoner exchange on 29 December 2019, but not her invalid son about whom she knows only, from a prisoner who was released, that he is alive. Maltseva says that both she and her son, Maxim Timofeyev, are Jehovah’s Witnesses.  Although the militants have followed Russia in banning this world faith, mother and son were not seized as believers. Their adherence to a faith which spurns any political engagement does, however, make the militants’ claim that they were ‘spying’ for Ukraine’s Security Service [SBU] particularly absurd. Since both mother and son’s flats have been appropriated, and enormous efforts were made to get access to the bank account in which Timofeyev held his savings, it is quite possible that extortion and robbery were always the main motives.

The so-called ‘DPR ministry of state security’ seized Timofeyev on 11 October 2017 in Khartsyzsk.  They claimed to have found some photos on his telephone that purportedly ‘proved’ that he was working for Ukraine’s SBU.  No details are given, however we know from other cases that photographs of Russian military equipment, of militant fighters, or the flash cars they drive about in would be quite sufficient to get a person seized by ‘DPR’ militants.

Maltseva was taken prisoner eight months later, after being summoned for interrogation.  Mother and son were put on ‘trial’ together for supposed spying, with the ‘sentences’ passed on 7 August 2019.  31-year-old Timofeyev was sentenced to 12 years’ imprisonment, his mother – 10.5 years’.  Timofeyev seems to have been accused only of ‘spying’, while in Maltseva’s case, they also claimed that she had “recruited agents for a foreign intelligence service”, by which they meant the SBU.

Maltseva thinks it possible that she was taken prisoner to put pressure on her son. For all her physical frailty, she has obviously needed to defend herself and her family, and she did so here too, lodging complaint after complaint about the falsified charges against her. She demanded, for example, that the expert assessment of her telephone be compared with the ‘indictment’ against her.  The expert had confirmed that no photos or videos had been taken on the phone and had therefore not been passed on to anyone, with this simply ignored by both the so-called ‘prosecutor’ and ‘court’ which used such disproven allegations to sentence her to over 10 years’ imprisonment.

She certainly had no other option, as the ‘lawyer’ who was first assigned to her son, and then to her also, proved to be a relative of the ‘investigator’. Both of them tried for 20 months to get rid of him, although he was only replaced during the actual ‘trial’.

Maltseva’s account and those of other former hostages are often reminiscent of the experiences of Ukrainian political prisoners held in occupied Crimea or Russia. Lawyers appointed for the defendants more often than not work for the prosecution, with their role normally being to sign documents and pressure prisoners into admitting to the charges, however absurd.  Here the lawyer suggested that Maltseva could get the ‘spying’ charge replaced by one of fraud.  She rightly refused, fearing that such an apparently ‘non-political’ charge could block her inclusion in the exchange.

Maltseva herself was not subjected to any violence, which she herself says was because her captors understood that one blow would have meant that they had to take her out feet first. The conditions of imprisonment were already bad enough to seriously endanger her life, and she was also taken prisoner in sandals and forced to wear these only for almost two years as no winter shoes were provided. She is now undergoing examination and treatment in Kyiv, and says that the doctors are amazed that she survived her ordeal.

There were three other women imprisoned on the same ‘spying’ charges.  Although she does not name them, it is likely that the two women also released were Marina Chujka and Halyna Tereshchenko.  Hopefully they have been able to give the SBU information about the fourth woman who was not released.  Maltseva says that the latter was almost not allowed to get down from her bunk, and was a person considered to have disappeared without trace.

In one of her interviews, Maltseva makes it clear that she sees her release as having been thanks to publicity and hopes that such publicity can now help free her son, who has had Group 2 invalid status since childhood and should not be held in the atrocious conditions of ‘DPR incarceration’.  She has not seen her son since their ‘trial’, and as mentioned, it was only from released hostages like Vasyl Savin that she even learned that he was alive and held in Makiyivka.  The Russian-brokered ‘all for all’ exchange of prisoners has meant, as far as both Russia and its proxy ‘republics’ are concerned, only release of those hostages whom the militants are willing to ‘confirm’.  The SBU believe there are up to 200 people who are imprisoned without such ‘confirmation’, including Maxim Timofeyev.

Asked how she reacted to the events in 2014, Malseva explains that she is a Jehovah’s Witness and as such defends only the Kingdom of God.  “We are very removed from any interference in politics or anything else”.   The militants clearly harassed her in prison, threatening new charges over her faith which the proxy republics have, following Russia, labelled ‘extremist’.  She says that her son is also a believer, however is clear that the charges themselves were brought over five or six photos on his mobile phone.

Her task now, or as soon as she has regained enough strength, is to gather the documents she has proving that Maxim is held in ‘DPR’ and pass them to Valeria Lutkovska, Ukraine’s Representative at the Minsk negotiations.  She hopes that they can be shown when the militants try to deny that they are holding her son.