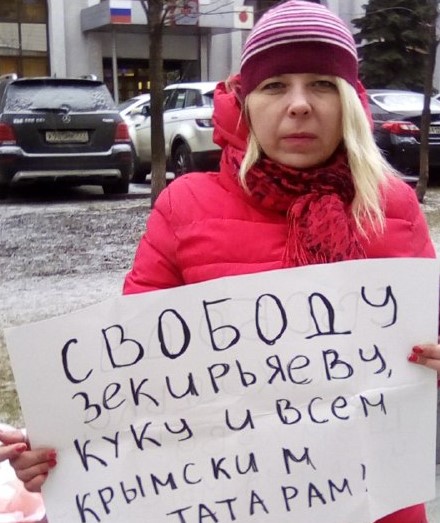 Darya Polyudova, a 30-year-old Russian left-wing activist who has tirelessly spoken out against Russia’s aggression against Ukraine and political persecution of Ukrainians, has been arrested in Moscow and remanded in custody.  This is not the first time Polyudova has been imprisoned for her civic activism, but this time she could face a very long sentence.

According to state-appointed lawyer, Galina Timofeyeva, Polyudova is facing two charges, under Article 205.2 § 2 of Russia’s criminal code,  (‘public calls to terrorist activity, justification of terrorism or its propaganda’ via the Internet), with the accusation against her apparently linked with supposed ‘justification’/ and 280.1 § 1 (‘public calls to action aimed at violating the Russian Federation’s territorial integrity’).  The latter norm was introduced into law in Russia in May 2014, two months after Russia’s invasion and annexation of Crimea.  Fears then that the article would be used to silence protest against Russia’s clear violation of international law in occupying Crimea have proven well-founded, as seen by the sentences against Ukrainians in occupied Crimea and against some Russians.

During the hearing in the Meshchansky District Court in Moscow, Polyudova denied all the charges, and pointed to a number of procedural infringements.  All of this was ignored, and judge Anna Sokova remanded her in custody until 13 March.

Polyudova herself has said that she is accused of “calls to separatism and a referendum in the Kuril Islands and justification of separatism on social media.”

According to various reports, the charges appear to be linked with two videos, and at least two other people - left-wing activist Kirill Kotov and journalist Olga Sapronova have been interrogated over this ‘case’, with both forced to sign non-divulgence agreements.

Polyudova was convicted on 21 December 2015 of ‘public calls to extremism and separatism, including via the Internet’ and sentenced to 2 years in a low-security prison.

Polyudova was arrested on 15 August 2014, two days before the banned march was supposed to have taken place.  She had been approached by an obvious provocateur, then jailed for 14 days for what the court decided to consider ‘petty hooliganism’.  She was never released even though criminal proceedings were only initiated on 15 September for alleged public calls to actions aimed at violating Russia’s territorial integrity (Article 280.1 of the Criminal Code).  Polyudova was recognized as a political prisoner by the Memorial Human Rights Centre back in October 2014.

In the end she was convicted of slightly different charges.  The first was ‘calls to separatism or extremism’, over a banner she held up during a single-person picket on April 4, 2014.  This read “No war against Ukraine, but revolution in Russia! No war, but revolution”!  She then circulated a picture of herself with the banner on VKontakte.  .

Polyudova was released in October 2017.  She has faced sundry forms of administrative prosecution since then, but none stopped her from coming out on single-person pickets in support of Ukrainian political prisoners.  She now needs Ukrainians’ support.

So too does Konstantin Kotov.  See: