Crimean Tatar TV ATR on brink of closing because Ukraine cuts fundingUkraine warned that abandoning Crimean Tatar TV ATR means giving up Crimea to RussiaUkraine on brink of abetting Russia by destroying vital Crimean Tatar TV ATR Ukraine takes over from Russia in silencing vital Crimean Tatar media in occupied CrimeaUkraine imposes sanctions on pro-Russian MP Medvedchuk & his wife. What about criminal proceedings?Ukraine’s President Zelensky blocks three pro-Russian channels linked with MedvedchukIzolyatsia: a Donetsk concentration camp too toxic even for Russia? Fake ‘Ukrainian fascist’ arrested and charged with working for Russia and its proxy Luhansk ‘republic’ Application practice of Article 110 of the Criminal Code of UkraineRussia indoctrinates children to want ‘to defend’ occupied Crimea against Ukraine Russian-controlled Donbas militants torture and imprison Donetsk lecturer for ‘spying for Ukraine’Criminal proceedings under Article 111 of CC of Ukraine against the journalistsRussia passes grotesque 19-year sentence against head of Crimean Tatar TV ATRMain suspect in Odesa 2 May 2014 tragedy given high-ranking post in Russian-occupied CrimeaVital evidence proves that Ukrainian soldier Markiv had nothing to do with Italian journalist’s deathPolice refuse to react to threats against journalist who exposed pro-Russian Telegram sway over Ukraine’s legislatorsState Media Vs. The Streets: How Lukashenka Lost The Media War In BelarusThreats against journalist probing impact of pro-Russian Telegram channels on Ukrainian MPsDonbas children deployed as weapons in Russia’s hybrid warfare against UkraineDonbas ‘republic’ journalists trained in propaganda skills in Russia
• Topics / Freedom of expression
• Topics / Human Rights Abuses in Russian-occupied Crimea 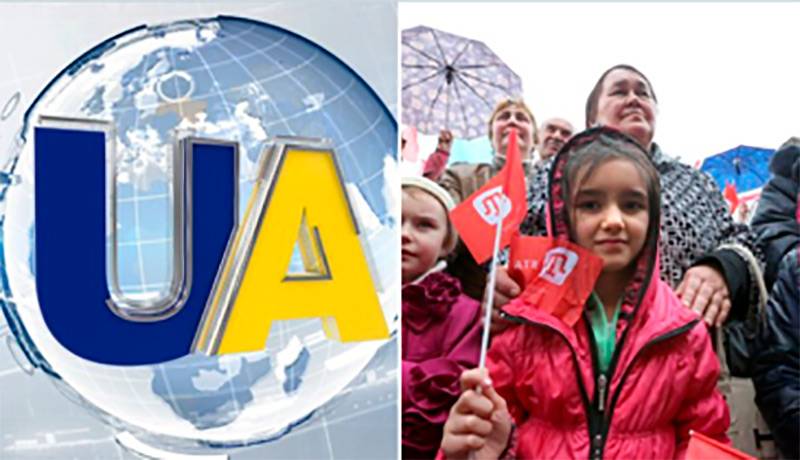 Ukraine’s international state broadcaster UATV has announced the cessation of all its news and satellite broadcasting which had provided information worldwide in English since 2015, and Crimean Tatar and Arabic more recently.  The resources, it is asserted, are needed for a Russian and Ukrainian language channel aimed at people in occupied Crimea and Donbas, though also abroad. While few would dispute the need for Ukraine’s voice to counter the mass Russian and pro-Russian propaganda in occupied territory, there are doubts about how this is being done, and also whether it was really necessary to axe the valuable service provided by UATV.

One crucial point is that unique resources have been removed to make way for  something which is, in principle, already available. UATV was Ukraine’s only English-language TV channel, and its Crimean Tatar service was also vital, given Russia’s crushing of independent Crimean Tatar resources, not all of which have been able to relocate and work effectively in mainland Ukraine.  UATV writes that the service was created in 2015 “to  ensure access of foreign audiences to objective, up-to-date and complete information about events in Ukraine and to maintain a positive image of Ukraine in the world. The channel was available on cable networks worldwide.”

According to MediaSapiens, over one billion UAH were spent on starting up the channel and its functioning.  It broadcast via satellite television, however by March 2016 it had become available on cable networks in Poland, Denmark and Israel, and on Internet television in Georgia.  The Crimean Tatar service began broadcasting in December 2016, also directed at the significant Crimean Tatar Diaspora. Over the last four years, UATV was seen and heard by audiences in many countries, who would not necessarily know Russian.

In an interview during his presidential campaign, Volodymyr Zelensky expressed the view that, to achieve reintegration of occupied territory, Ukraine needed “to launch a serious information war and win it”, with people living in such areas fully understanding that they are Ukrainians.  This would include, he said, “a powerful international channel, in Russian, which would show the truth about Ukraine”.

In September 2019, the Ministry of Information Policy was changed into the Ministry of Culture, Youth and Sport, with this ministry, under Volodymyr Borodyansky, becoming responsible for foreign broadcasting.

At the end of November 2019, Borodyansky announced that a state channel was to be launched in February 2020 which would broadcast to occupied Donbas in Ukrainian and Russian.  The task, he said, was to ensure that people on occupied territory know the truth about what is happening in Ukraine and to begin dialogue with the people living there.  Borodyansky said that the broadcasting would be only to occupied territory, although earlier statements, for example, from Kyrylo Tymoshenko, Deputy Head of the President’s Office, spoke of this being a channel for the entire Russian-speaking world.

The draft law making the amendments to legislation needed for this reformatting of foreign broadcasting has only just passed through its first reading, however Zelensky’s ‘Servant of the People’ party has an absolute majority in the Verkhovna Rada, and can get the amendments made in time.

It is frustrating that so little warning was given of plans to axe UATV.  As recently as 10 December, the Ministry was still asserting that UATV would continue broadcasting abroad.  Yet by the end of December, the management of UATV had informed that they were leaving and that foreign broadcasting would be stopped.

Back on 10 December, Anatoly Maksymchuk, Deputy Head of the Ministry, had told Detector Media  that the plans were for an information and entertainment channel to be launched in February 2020, and for a purely information channel to emerge through the year.  The targeted audience is to be both occupied Donbas and Crimea.

There remains no answer to the questions raised here when Zelensky first mentioned a Russian-language channel for occupied territory, including why the channel would not be jammed like other Ukrainian channels.  Others have now also emerged, both about the axing of UATV and about what really is planned to replace it.

One of those most openly sceptical is well-known media expert and journalist Natalya Ligacheva. The worst thing, she says, is that there has thus far been no public commentary or official presentation as to what is planned. With respect to UATV, the loss of Crimean Tatar broadcasting is against a background of the state giving hardly any attention either to broadcasting in Crimean Tatar or to addressing issues to do with Crimea.  Ligacheva is not alone in finding this totally unacceptable, and also dangerous from the point of information security.

Crimean Tatar activist Zair Smedlyaev points out that a very large number of Crimean Tatars live abroad, and it was extremely important for them to learn, in their native language, what was happening in Ukraine. “I think that this indicates the attitude to the culture of the indigenous people. They make pronouncements about how they will protect and develop, but effectively develop languages which are not under any threat. “

Ligacheva expressed doubts about the need for a Russian-language channel for Donbas back in June 2019, and later developments have clearly not changed her mind.  Even if one (charitably) assumes a lack of any business interests,  there seems no particular need to create a special channel to have ‘Ukraine-centric’ content in the Russian language.  There are already many Ukrainian channels which have a Russian-language version, and finding Ukraine-focused and truthful information in Russian is simply not a problem. Ligacheva also points out that, with respect to Ukraine, there is no need to create a non-existent problem, since people in the East and South of Ukraine may not always speak Ukrainian, but they do understand it.  She notes that the survey Detector Media carried out in April 2018 demonstrated that for people in the East of Ukraine, the interest factor, as well as quality, are decisive in choosing content, not whether it is in Ukrainian or Russian.

In both Crimea and occupied Donbas, a huge number of even Internet sites are blocked, with the reason almost certainly always that they provide truthful information about Ukraine and about the occupied territories.  If this new channel is equally truthful, it will assuredly face the same fate.  Yes, there are normally ways of bypassing such impediments, but not everybody knows them, and certainly telecommunications providers would be unlikely to list them.

If the new channel simply provides the entertainment elements which will not irritate the occupiers, with some innocuous details about life in Ukraine, it may be allowed to continue.  The Soviet regime positively encouraged ‘Ukrainian cultural content’ – folk dancing, singing, etc., which helped them perpetuate Soviet myths.  If this new Ukrainian channel were to do the same, it would be a terrible betrayal of the nine Crimean Tatar civic journalists imprisoned and facing huge sentences for reporting the truth about repression in occupied Crimea, as well as all the other journalists, bloggers and activists in Crimea and Donbas who have faced torture, imprisonment or forced exile.

A channel that does not provide the truthful information that will get it blocked will certainly not facilitate the future reintegration of areas under occupation.  The danger is that it could do precisely the opposite, creating the false illusion that Ukrainian media are available in occupied territory.  Add some carefully edited ‘dialogue’ on talk shows, and one of the key objections to holding ‘elections’ in occupied Donbas – the lack of Ukrainian access to the media – has apparently been removed.