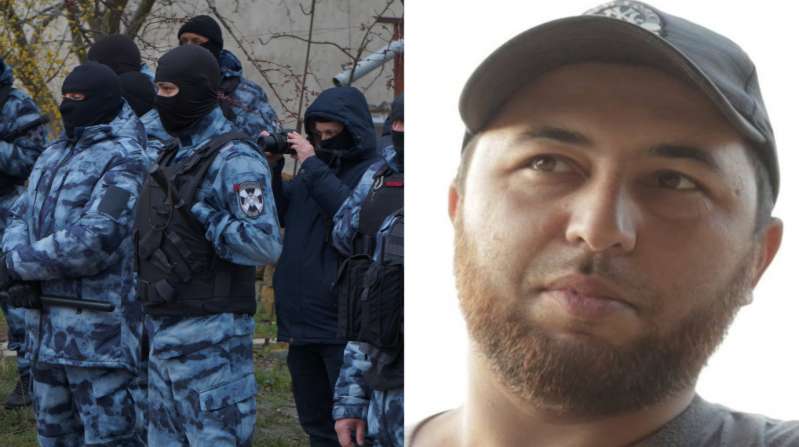 Two Crimean Tatar political prisoners – Osman Arifmemetov and Server Mustafayev - recently became laureates of the literary award «Крымский инжир» [‘Crimean Fig’], with Arifmemetov’s prize for a text poignantly entitled ‘My Deportation’.  The awards in Kyiv were handed out by Ukrainian filmmaker and former Kremlin political prisoner Oleg Sentsov who was forced to pass them to the men’s representatives just as once his prizes were accepted by his cousin and lawyer while he remained imprisoned in Siberia. As journalist Taras Ibragimov noted in an acceptance speech on Arifmemetov’s behalf, the award demonstrated that “Osman Arifmemetov is a journalist by vocation who has not ceased his work even after his arrest and imprisonment.  Osman is a modern example of the dissident movement of Soviet times.”  Ibragimov, who was on 18 January himself issued a ban from entering occupied Crimea as Russia’s reaction to his reports on its political repression, also mentioned to of Arifmemetov’s closest friends, Remzi Bekirov and Ruslan Suleymanov,  who are also among nine civic journalists arrested for covering armed arrests and political trials in occupied Crimea.

Arifmemetov’s ‘My Deportation’ and Mustafayev’s poems are awaiting formal release when the ‘Krymsky Inzhir’ book is published, however the competition organizers did allow the civic journalist initiative ‘Grati’ to post a text called ‘Monologues’ based on ‘My Deportation’.

There is probably nothing that can compare with the horror of Joseph Stalin’s Deportation of the entire Crimean Tatar people in May 2018, which is rightly recognized by Ukraine as an act of genocide. Russia is, however, very clearly using terror and deportation – whether through imprisonment in Russia or forced exile from their homeland – as weapons against Crimean Tatars, especially those who take an active civic stand.

Arifmemetov and 23 other Crimean Tatar civic activists, including four civic journalists, were arrested on 27 March 2019 in Russia’s most open attack to date on the civic initiative Crimean Solidarity and the Crimean Tatar human rights movement in occupied Crimea.  Arifmemetov, Bekirov and Vladlen Abdulkadyrov were away when armed and masked men burst into homes where small children were sleeping, and were seized in the Rostov oblast late that night.  Bekirov’s lawyer reported as soon as he was able to see his client that the three men had been subjected to violence and torture, and in his text Arifmemetov gives further shocking details.

The three were in MacDonalds when masked men dressed all in black burst in and shouted “Don’t move!”.  His first thought was that this was some kind of stunt, and even when he saw the gun pointed at him, he still thought it must be some kind of prank.

Unfortunately, it wasn’t.  Handcuffed behind their backs, they were forced into a minivan and made to lie with their foreheads to the ground, with their captors kicking them in the back and rummaging in their pockets and Arifmemetov’s shoulder bag.  Everything, including their treatment of the prayer mat that they pulled out of his bag, was accompanied by foul language and jeering.

When their captors stopped the van and pulled them out in an asphalted surface near some trees, Arifmemetov decided that this was the end, that they were going to turn into the latest of the ‘disappeared’.  “All that time I had my arms behind my back and was in handcuffs. They took us out of the min-van, dragging us along the ground. Then, holding us by the handcuffs they kicked us with their boots. They put our faces to the asphalt and beat us with batons on the back, with the end of the baton hitting the back of the neck.  They lifted us up and took us to the mini-van. A second group of FSB men arrive, took off the handcuffs, places us with our hands on the mini-van, spreading our legs widely apart.  I blacked out and came to from the bitter smell of ammonia.”

At one point they were transferred to another mini-van, but all the time forced to sit handcuffed behind their backs.

Arifmemetov says that during the journey he recalled another occasion when he and nine other activists were imprisoned for five days quite literally for standing in solidarity outside the home of a person facing an armed search).  He had been put into what they call ‘the glass’, a one metre squared room.  There was a copy of the Russian constitution there which he opened and learned by heart the relevant articles of, namely those guaranteeing his right not to testify against himself and his right to a lawyer.  This knowledge was to particularly irritate the FSB during their attempt to interrogate him.

People had also left messages on the walls of this ‘glass’, with some of them clearly having been written by Muslims.  One stated: “Muslim, Allah is watching you. Take care that you don’t shame yourself. Allah is enough for us as our guardian”.  Arifmemetov says that the words could not have been more timely, after all, he had been imprisoned as a Muslim and because he had heeded Allah’s call to help the oppressed. “What did I do? I gave coverage to the lawlessness of the enforcement bodies, recorded infringements in the courts and prepared parcels [for political prisoners]”.

The FSB officers trying to interrogate Arifmemetov did not confine themselves to showing irritation.  Among other methods, they brought in some kind of device and threatened that they would attach wires from it on to him.

They did not let him see his lawyer, Lilya Hemedzhi, however did not continue the earlier torture.  Both then and later, in the ‘court hearing’ on detention, he stated clearly that he had been seized, beaten and that his personal items had been stolen.

Arifmemetov himself noted that he had been in that court so many times, supporting and providing coverage of the hearings of other political prisoners.  Now he himself was seeing it all from the other side.

There are a huge number of disturbing aspects of his account, including the primitive and brutalized behaviour of all of the enforcement officers. As they were driven away from the ‘court’, they saw a lot of people gathered and waving at them, including Remzi Bekirov’s son, Mukhammed.  “The convoy guards, looking over at the people gathered, jeeringly laughed and bleated as though sheep, “Baa, baa””. There was no room for doubts as to their hatred of Crimean Tatars. Remzi tried to say something to me, but they stopped him with the words “shut your mouth”.”

When they arrived at the Simferopol SIZO [remand prison], they were forced to strip to their underwear.  They were asked whether they had any bodily injuries, but when Arifmemetov showed them the bruises from the beating inflicted, they called the head of the SIZO.  He arrived, looked and claimed that all was fine “no bodily injuries”.

All 24 men were illegally taken the next morning, by plane, to Rostov in Russia  No warning had been given to the men’s families, and there had been no time to pass on food, medicines, etc, with this of potentially fatal consequences for 58-year-old Dzhemil Gafarov who has advanced kidney disease as well as a heart condition.

“The guys held themselves well, with Tofik [Abdulgaziev] joking along the way.  We all supported each other. A thought came to mind.  “Back in 1944 it was like this that they forced Crimean Tatars into wagons for cattle and took them away in an unknown direction. Only then they took the elderly, women and children. It was harder for them. Now they’ve taken men, leaving children and wives without the breadwinner. This could be the beginning of terrible repression. Allah willing, we will endure this also, as they endured in the past.  True sons of this people”.

The men all remain imprisoned to this day, and are facing very long sentences on fatally flawed ‘terrorism’ charges.  Their arrests were widely recognized and condemned as being for their civic activism and as a form of terror.  See:

34-year-old Osman Arifmemetov is a maths and information science teacher by profession, although he was supporting his family by writing computer programs and giving private lessons. He and his wife have two small children, Fatima, who was born in 2015, and Mustafa (2017).  Arifmemetov was one of the first civic journalists in occupied Crimea, who tirelessly attended political trials and ensured that information was circulated. This, and Civic Solidarity, the initiative that arose from people like Arifmemetov and Server Mustafayev, are what the Russian occupation regime are determined to crush.