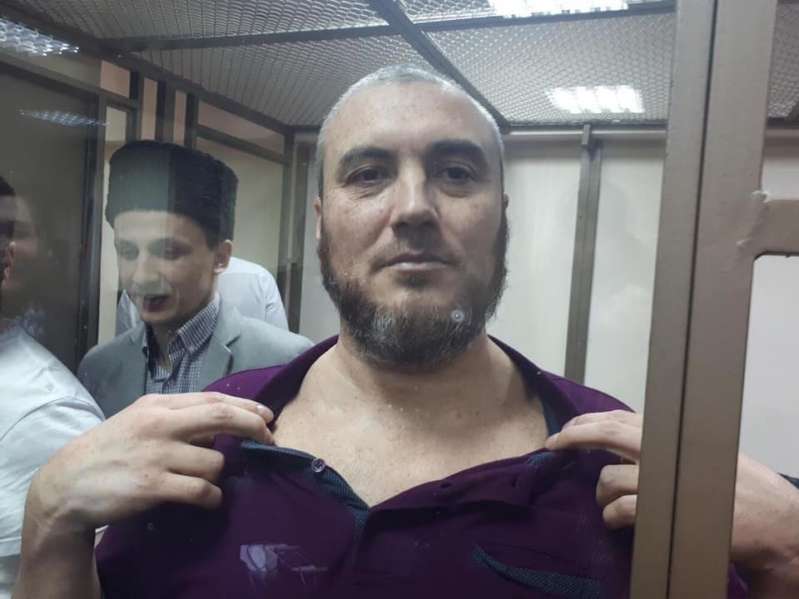 Server Zekiryaev has severe swelling around the neck and has been told that this is due to a tumour.  The medic in the SIZO, or prison in Russia where the recognized political prisoner is being held cannot determine whether it is benign or malignant and has said he needs an ultrasound scan.  However, a week has passed with no measures taken, although his lawyer, Alexei Ladin rightly states that this is a situation where days, or even hours, can be of critical importance.  During the court hearing on 27 January, Ladin asked the judges to issue a separate ruling addressed to the SIZO medical unit and stressed that Zekiryaev has the right to medical care.

Russia is already placing the life of at least one other imprisoned Crimean Tatar civic activist in danger.  58-year-old Dzhemil Gafarov suffers from severe kidney disease, with this even before his arrest on 27 March 2019 having caused a heart attack. Even according to the Russian legislation illegally used to prosecute Ukrainian Muslims from Crimea, his medical condition means that he should not be in prison at all (details here).

If in his case, the fact that Gafarov simply needs to be released probably deters the SIZO and Russian courts from acting out of fear of the FSB and others who commission such political trials, the situation here is quite different.  It is glaringly plain that a person with a tumour needs immediate medical examination, yet even this is being denied him.  The same applies with Arsen Dzhepparov, one of the political prisoners from the Yalta region who is facing deafness because another SIZO is doing nothing.

In all of these cases, Russia is already in grave breach of international law and is now also showing criminal disregard for human life.  The men are all recognized political prisoners and their release has been demanded by major international bodies.

Zekiryaev and seven other Crimean Tatars are currently on trial in Rostov (Russia), the latest Ukrainian Muslims to be arrested for their religious and political views, as well as for their defence of political prisoners in occupied Crimea.

Although many civic activists had already faced persecution earlier, the armed searches and arrests on 11 October 2017 marked a new and very serious escalation in Russia’s offensive against Crimean Solidarity, the civic initiative helping political prisoners and their families, and reporting on repression in occupied Crimea.  Six men were arrested that day: Crimean Solidarity civic journalists Timur Ibragimov; Seiran Saliyev and Suleyman (Marlen) Asanov; Crimean Solidarity photographer Ernes Ametov; volunteers, organizing parcels for political prisoners, Memet Belyalov, and Server Zekiryaev.   Then on 21 May 2018, they came for Crimean Solidarity coordinator and civic journalist Server Mustafayev and Edem Smailov, who was active in organizing children’s festive events and is also the leader of a local religious community.

All eight men have families, and all were respected and law-abiding members of their communities, making the supposed ‘terrorism’ charges against them so shockingly cynical.  As in all these conveyor belt trials’, the men are not accused of any recognizable crime, merely of alleged ‘involvement’ in Hizb ut-Tahrir, a peaceful pan-Islamist movement which is legal in Ukraine and which is not known to have committed any acts of terrorism or violence anywhere in the world.  Russia is literally the only country to have declared Hizb ut-Tahrir ‘terrorist’, and its Supreme Court did so in 2003 at an effectively secret hearing which was only made public when it was too late for it to be appealed.

To reiterate, not one of the men is accused of any recognizable crime/  All eight men were informed in February 2019 that they were facing another charge – of ‘‘planning to violently seize power’’ under Article 278 of Russia’s criminal code (‘planning a violent seizure of power’).  There is no empirical reason for such charges, and the Russian Memorial Human Rights Centre has pointed to evidence that the FSB applies this extra charge in cases where men refuse to ‘admit guilt’.

These ‘trials’ are also based on flawed and evidence, often provided by FSB officers, men who have been tortured or threatened into appearing as ‘secret witnesses’, and falsified material.  In this case, the charges appear to be primarily based on illicit recordings of conversation in a mosque, and were probably prompted initially by a conflict between the men and the local imam who, like the Mufti of Crimea, has chosen to cooperate with the occupation regime.

PLEASE contact politicians and the media in your country and tell them about Russia’s treatment of the above political prisoners, and stress the need for immediate reaction, especially with respect to Dzhemil Gafarov  and Server Zekiryaev.

PLEASE ALSO TWEET (@PACE_News)  the Parliamentary Assembly of the Council of Europe which is now meeting in Strasbourg and which justified waiving sanctions against Russia and allowing it to return to PACE for the sake of ‘dialogue’.

AND PLEASE WRITE to the men in Rostov!