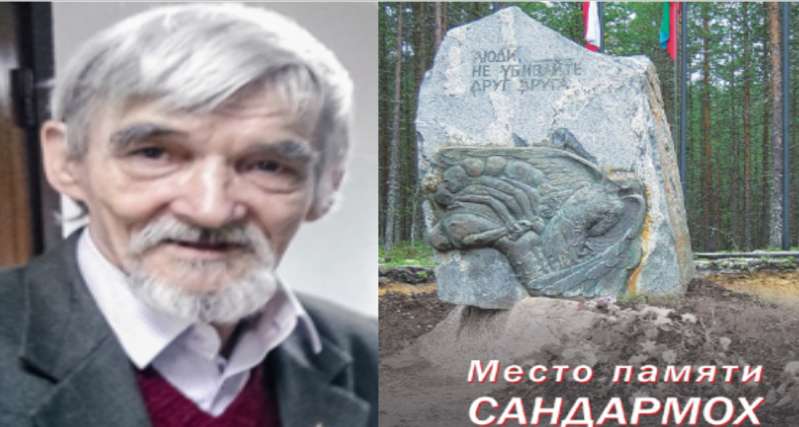 Russian historian Yuri Dmitriev turned 64 on 28 January 2020, his third birthday imprisoned in Russia on charges that bear no scrutiny, and that clearly coincided with the beginning of a campaign to rewrite the history of one of the darkest pages of the Soviet Terror – the mass killing by quota of Russians, Ukrainians and other prisoners of the Solovetsky Labour Camp at the Sandarmokh Clearing in Karelia in 1937.

If the current regime in Russia was hoping to silence Dmitriev, it has failed. The historian and Head of the Karelian branch of the Memorial Society has just published a book entitled ‘Sandarmokh.  Place of Memory’, providing information about both the victims and the perpetrators of the mass executions in the forest.  In a recent letter, Dmitriev wrote that “it is memory that makes human beings human, and not a part of the population.  <> While I’m alive, I won’t allow them to rewrite our common history. <> The attempt to rewrite the history of Sandarmokh is part of the strategy of the current regime, an attempt to return our country to a camp “surrounded by enemies”. The aim is to retain their power.  A frightened population will always seek protection from a strong leader”.

In a preface to the book, Dmitriev repeats this central theme about the pivotal role of memory.  He points out that, while Sandarmokh is a place of memory, for him it is also a place of upbringing, a place where a population becomes a people, bound by their shared fate. There are over 10 national remembrance signs, including a Ukrainian Cossack Cross, and he is sure that there will be more.

“I am firmly convinced that a person, knowing the history of his or her family, even to the seventh generation, honouring his or her ancestors, is capable of building new relations with the state on totally different principles from those now seen.

This is the direction in which I work, and this is what makes me inconvenient.”

Under former KGB agent Vladimir Putin, Russia has increasingly concealed archival information about Soviet crimes, even punishing those who, quite correctly, state that the Soviet Union collaborated with the Nazis and invaded what was then Poland on 17 September 1939.  There has been a steady move towards rehabilitating dictator and mass murderer Joseph Stalin and other criminals, with that accompanied by repressive methods against historians and activists from the Memorial Society.

It is thanks to Dmitriev and his Memorial colleagues that we now know the fate of 289 Ukrainian writers, playwrights, scientists and other members of the intelligentsia, who were among 1,111 prisoners from the Solovetsky Labour Camp who were executed by the NKVD from 27 October to 4 November 1937.  These were killings by quota, with a document from 16 October 1937,  published for the first time in Dmitriev’s book, where the head of the Solovky Prison is to told to immediately hand over 1,116 people sentenced to be executed to Mikhail Matveyv.  The list of those ‘sentenced’ is by categories, with these including “Ukrainians”.  The NKVD had to report back that they had ‘only’ executed 1,111 since one person had died before his execution date, and four other men were sent to Leningrad, Kyiv or Odesa for “investigative activities”.

Dmitriev’s new book is based on a former work from 20 years ago, entitled ‘Sandarmokh.  Place of Execution’.  Despite its formidable length, it still only contains the names of the victims beginning with the first letters of the alphabet, with others to be recorded in later volumes of the work. On this occasion, Dmitriev worked in cooperation with Anatoly Razumov, though it was only over a very brief period at the beginning of 2018, that the two men were able to meet and work together.

Dmitriev has been imprisoned for most of the last three years, although here too Russia’s calculation has misfired.  The charges against Dmitriev were very clearly aimed at discrediting him, and the Memorial Society, with this especially evident in a propaganda film on the state-controlled Rossiya  24 less than a month after Dmitriev’s arrest.

For criminal proceedings over alleged production of ‘child pornography’ to destroy a person’s reputation, they must be at least remotely credible, and these ones were not.

Dmitriev was arrested on 13 December 2016 and spent the next 13 months in custody, charged with ‘preparing pornography involving a minor’ (Article 242.2 of Russia’s criminal code) and ‘depraved actions with respect to a child under the age of 11’ (Article 135).  The charges pertained solely to a folder filed on his computer, and never ‘circulated’, which contained 114 photos of his adopted daughter Natasha.  The little girl had been painfully thin and in poor health at three years old, when he and his former wife took her from the children’s home, and the authorities had themselves advised him to monitor her development.  Each of the photos, taken between 2008 and 2015 recorded her weight and height.

This assessment was rejected by Dr Lev Shcheglov, the President of the National Institute of Sexology, as well as two other specialists who saw nothing pornographic in the photos and who confirmed that it was common practice in Russia to take photographs for such medical purposes.  With the trial in tatters, the prosecutor tried to get ‘a psychiatric assessment’ from the notorious Serbsky Institute, however even the psychiatrists there found no aberrations, and on 5 April 2018, the Petrozavodsk Court under Judge Marina Nosova acquitted Dmitriev of the ‘child pornography’ charges.

It seems likely that this initial acquittal was issued to deflect public attention to the trial, and never intended as more than an interim measure. Despite the lack of any grounds, the acquittal was revoked by the Karelia High Court on 13 June 2018, and the case sent back for ‘re-trial’ under a different judge. The sole arguments provided during the appeal hearing were objections from Natasha’s grandmother, who had left the child in a children’s home and had not seen her for many years.  There were also excerpts from questioning of the child which was supposed to demonstrate a disturbed psychological state (‘suicidal moments’).

There was no suggestion then of any allegations of sexual abuse, nor had there ever been.  It was, in fact, evident from Natasha’s letter, shown to the court, that she loved and desperately missed her daddy, Dmitriev.

On 27 June 2018, Dmitriev was re-arrested, with Russia’s Investigative Committee now charging him with ‘violent acts of a sexual nature’, also against his adopted daughter, whom he had not seen since his arrest almost two years earlier.

On 28 October 2019, 200 prominent Russians issued a statement in defence of both Dmitriev and his adopted child, whose life the FSB is destroying for the sake of a grubby and politically-motivated trial.

““Unacceptable and inhuman methods have been deployed: pressure on Dmitriev’s adopted daughter; manipulation of the child’s consciousness in order to get her to testify against a person close to her “, the authors wrote. “The initiators of this case are trying, whatever the cost, to prevent Dmitriev’s acquittal, to blacken his name and imprison him so as to not bear liability for the unlawful organizing of criminal prosecutions and the unlawful holding of an innocent man in detention and in psychiatric institutions for nearly three years.

The ‘debate’ in the second trial of Yuri Dmitriev is due on 10 February, with Dmitriev’s lawyer, Viktor Anufriev anticipating a verdict by the end of February.