Ukrainian gets double sentence for ‘hostility to Russia’ over annexation of CrimeaUkrainian sentenced to 8 years on bizarre ‘sabotage’ charges in Russian-occupied CrimeaHow do you explain that Daddy is a political prisoner far away in Russia?Donbas Militants and Russian FSB Coordinate Fake ‘Ukrainian Saboteur’ ArrestsRussia accuses Ukraine of Trying to Sabotage Crimean Electricity with a Handsaw
• Topics / The right to liberty and security
• Topics / Human Rights Abuses in Russian-occupied Crimea 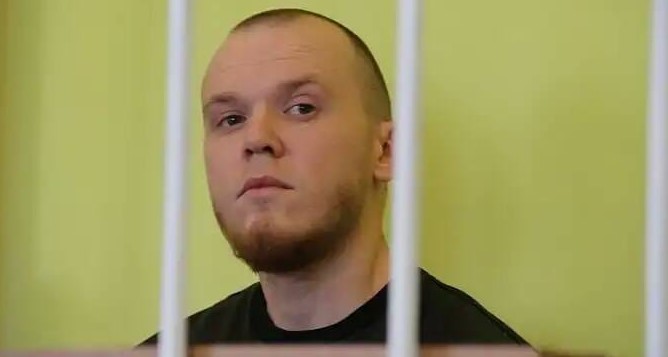 Ukrainian political prisoner Hennady Lymeshko is receiving threats to his life from prison officials in Russia, and his wife reports that these are both because of Lymeshko’s Ukrainian nationality, and because he converted to Islam in 2018.  Iryna Lymeshko has informed the Association of Political Prisoners’ Families that the psychological pressure on him has intensified over recent days with officials, in particular, Timur Alikhmanovich, threatening to shoot him as a Ukrainian and as a Muslim.

Iryna Lymeshko is asking Ukraine’s Ministry of Foreign Affairs to send an urgent request for the Ukrainian consul to visit her husband and to publicly demand that the Russian authorities stop putting pressure on him and ensure his safety.

27-year-old Lymeshko, who has a small daughter, is one of an ever-increasing number of Ukrainians, since filmmaker Oleg Sentsov and civic activist Oleksandr Kolchenko, whom Russia’s FSB has seized and imprisoned on supposed sabotage or terrorism charges.  Such cases are widely reported in the Russian state and Russsian-controlled media as ‘proof’ that Ukraine’s military and / or security service [SBU] are an active threat to the population which the FSB are vigilant in thwarting.

On 15 August 2017, the FSB in Crimea  claimed that Lymeshko had arrived in Crimea on 12 August, and had been arrested three days later. They asserted that through his arrest, they had “prevented several acts of sabotage against infrastructure and vital services in Crimea”

They produced a video apparently showing Lymeshko being seized by a group of people, with the latter using painful methods against him until he asserted that “they told me to cut an electricity post”.  A supposed ‘interrogation’ is shown in which Lymeshko, who looks as though he has been beaten, ‘confesses’ to carrying out explosions on the electricity lines between Sudak and Novy Svyet in Crimea for somebody called ‘Andriy’ from the SBU. They also claimed that he was supposed to set fire to forest  in the Sudak – Rybachye – Alushta area and one other act of arson, and to cause a rock avalanche that would block the Sudak – Novyy Svet highway.

There were multiple question marks over the FSB’s claims.  Even if Ukraine’s border guards had turned a blind eye to Lymeshko carrying explosives (as well as a very large handsaw!) into occupied Crimea, he also needed to pass through Russian border control.  Yet three days later, the FSB allegedly found two TNT explosive devices on him, together with a mechanism for detonating them, flammable liquids; and a digital camera (supposedly for the purpose of recording the sabotage in order to report back to his overseers.

The FSB called  Lymeshko  “an agent of the SBU  in the Kherson oblast, sent to Crimea to carry out acts of sabotage” and claimed that he had worked as a senior reconnaissance officer in the Ukrainian armed forces during the military conflict in Donbas).  Ukraine’s Armed Forces confirmed that Lymeshko had been a contract serviceman from November 2016 through May 2017, but said that he had had no link with the military since then.

He was allegedly arrested while trying to damage the above-mentioned electricity lines with this handsaw. All of this was broadcast on Russian television, together with Lymeshko’s confession, to having been in a sabotage group controlled by the SBU since the autumn of 2015.

It was not only the visible bruises on Lymeshko’s face that made his ‘confession’ very unconvincing.  The young man (then 25) was clearly trying to provide answers required of him, and it was also obvious that the video was not continuous, but made up of separate parts pasted together.

It is also typical of such cases, that, despite the ‘confession’ reported on Russian state-controlled TV, Lymeshko ended up charged only with possession of a weapon and the illegal production of explosive devices, with the sabotage plot and SBU forgotten.

Lymeshko had not had an independent lawyer and it seems likely that he was tricked into pleading guilty on 10 May 2018 at the Sudak City Court, perhaps in exchange for a shorter sentence.  Journalist Anton Naumlyuk, who was in the court, reported that ‘judge’ Yevgeny Rykov considered the fact that Lymeshko has a young daughter to be an extenuating circumstance.  The court, however, found there to be an aggravating factor in the alleged political motive of “hostility to the Russian Federation in connection with reunification (sic) of Crimea” and passed a huge 8-year sentence.  Rykov had spent only 20 minutes in the consulting chamber before issuing a ruling and providing all parties with certified copies, which had probably been prepared in advance.

That sentence was upheld on 24 June 2018 by the Russian-controlled High Court in Crimea.

I wish you good health, strength and patience, and hope that you will soon be freed.  I’m sorry to write so little.  It’s hard for me to write in Russia, but you are not forgotten.

Address (You can write this in Russian or in English)