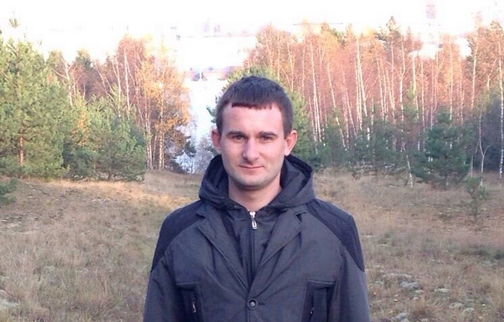 Ukrainian hostage Roman Sahaidak is in acute pain and may suffer irreparable damage to the spine after the beatings he received by militants from the self-proclaimed ‘Luhansk people’s republic’ [LPR].

According to his sister, Anna Stastnikova, Sahaidak complains of severe headaches and of backpain which she assumes is linked with the torture he was subjected to after being seized by the militants in June 2017.  He received no medical treatment and it is likely that broken or fractured bones are now growing back wrongly.  Her brother has constantly asked the prison administration for a medical examination, but has been ignored.

Sahaidak is an entrepreneur from Krasnodon in the Luhansk oblast whose seizure by the militants in 2017 was likely linked with his refusal to sell his part of his business to his then business partner, Oleksandr Ryasnoy.  The latter had offered a very bad deal and, according to his sister, Sahaidak was also wary of Ryasnoy, in part for his willingness to denounce people to the so-called ‘LPR ministry of state security’.   The two had reportedly agreed to cease working together, and Sahaidak’s ‘arrest’ has presumably left Ryasnoy free to take over the business.

The then 29-year-old was stopped on June 30, 2017 by armed men in military gear who forced him into their car.

The family later found witnesses who reported that four masked men and a man in civilian clothes had driven up with machine guns at around 16.00, put a bag over his head and pushed him into the car before driving off.

Ryasnoy also appeared the next day during the ‘searches’ and told Roman’s father that his son would be released if they came up with 20 thousand dollars.

Slastnikova says that her father could only raise 16 thousand which he handed over, while asking for extra time to find the rest.  Ryasnoy took the 16 thousand but said he couldn’t wait for the rest, and they therefore wouldn’t see their son again.

Sahaidak’s parents had also turned to this so-called LPR ministry and were told that nobody knew anything and that he was not on the list of people detained.  The militants did, however, hint that he could be in the “ministry of state security’s internal security service’ which is subordinate only to Moscow.

Sahaidak’s parents kept his capture secret for some time, fearing that publicity could place his life in danger.  It was Slastnikova who first decided to approach the media, believing that it was publicity that could help her brother.

She may have been right since after the media reports, Sahaidak’s parents received a call from the ‘LPR ministry’, who agreed to show them their son who had clearly been very badly beaten, but was at least alive.

The LPR militants initially tried to charge him with a terrorist act that took place a week after he was seized. Here, as over his initial disappearance, it was the publicity that made the ‘LPR ministry’ understand that such charges were too hopelessly flawed.  They later began accusing him of ‘fraud’ or, alternatively, ‘extortion’ with respect to Ryasnoy.

Sahaidak was ‘sentenced’ in early December 2018 to 13 years’ imprisonment, with full confiscation of his property. Although finally convicted of ‘armed robbery’, this appears to have been a later variation, with the trial initially over charges of working for Ukraine’s Security Service [SBU] and planning terrorist attacks.  As mentioned, publicity over the fact that the alleged ‘terrorist attack’ had occurred while Sahaidak was being tortured in an LPR basement may well have been the reason that the charges were changed.

He has long been on Ukraine’s exchange list, but remains one of the minimum 200 hostages still held in occupied Donbas.