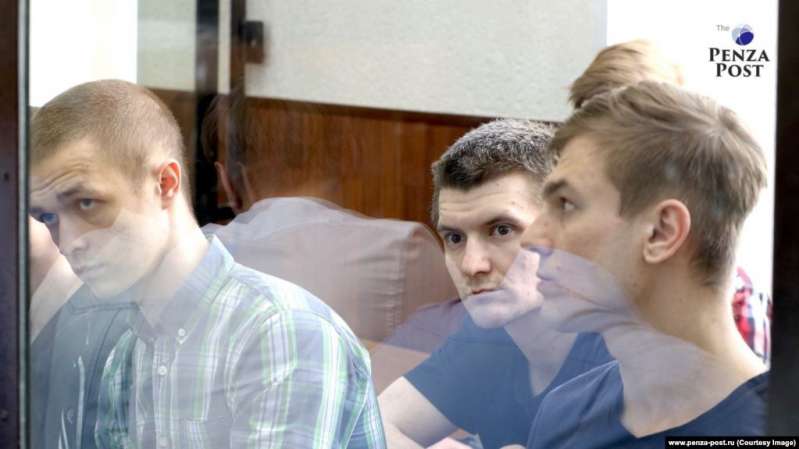 In a case frighteningly reminiscent of Stalin’s Terror, 7 young men have received sentences from 6 to 18 years for supposed involvement in a ’Network’ ("Сеть") that almost certainly never existed. Most of the defendants and witnesses have described the extreme torture which made them willing to sign any document put in front of them.

27-year-old Dmitry Pchelintsev was sentenced in total to 18 years (as demanded by the prosecutor); 23-year-old Ilya Shakursky to 16 years.  Both men have described the torture used to extract confessions and retracted them in court.  30-year-old Andrei Chernov – 14 years; 25-year-old Maxim Ivankin – 13 years; 25-year-old Mikhail Kulkov – 10 years; 31-year-old Vasily Kuksov – 9 years and 27-year-old Arman Sagynbayev – 6 years.  All but the two shortest sentences are in maximum-security prison colonies.

Some of the men did not even known each other, though all shared anti-fascist and anarchist views.  Some of them were also involved in helping taking food to the homeless.  A lot of the supposed ‘evidence’ for the allegedly terrorist ‘Network’ came from the young men’s airsoft matches.

The FSB have long used torture to force confessions, but normally to involvement in something that does genuinely exist.  Here the only evidence of either the organization or of involvement in it came from the testimony of a man who received a suspiciously light sentence in an earlier criminal case and ‘confessions’ from the defendants which most have retracted and said were given under torture.  Despite detailed accounts of electric shocks and other torture methods, visual signs of torture and the lack of any other proof, the Investigative Committee has refused to initiate criminal charges and the public prosecutor demanded and the court handed down huge sentences.

Prominent human rights organizations like Memorial Human Rights Centre and ‘For Human Rights’ have long pointed to the lack of any evidence that ‘Network’ even existed and the testimony of most of the men about the brutal torture that forced them to sign whatever ‘confessions’ were put in front of them.

Two of the men from Penza - Dmitry Pchelintsev and Ilya Shakursky have been designated the leaders of ‘Network’ and are charged, under Article 205.4 § 1 of Russia’s criminal code with creating a terrorist organization.   Andrei Chernov; Maxim Ivankin; Vasily Kuksov; Mikhail Kulkov and Arman Sagynbayev are charged with taking part in a terrorist organization (Article 205.4 § 2).  The prosecutor has demanded 18 and 16 year sentences for Pchelintsev and Shakursky, respectively, and sentences from 6 to 14 years against the others.  Some of the men are also facing charges of possession of firearms or explosions which the FSB claim to have found during searches.

In its analysis before declaring all the seven Penza men political prisoners, Memorial HRC reports the sinister role played in this case by another young man, Yegor Zorin..who was also linked with the anarchist and anti-fascist movements.  He was first detained in February 2017, seemingly when the FSB found hashish in the flat that he was visiting somebody in. Memorial HRC has learned from people who know Zorin that he came under enormous pressure from then to collaborate with the FSB.

It seems likely, Memorial believes, that Zorin’s second arrest was merely a pretext to begin wide-reaching repression against anarchists and anti-fascists. The criminal case over the supposed creation of ‘Network’ was initiated the following day, 18 October 2017, with the above-mentioned defendants arrested over the coming days.

The role which Zorin appears to have played has had many analogies in Russian-occupied Crimea, with the methods used described in detail by at least two Crimean Tatars (Renat Paralamov and Dinar Minadirov) who withstood the torture, but were forced to flee to mainland Ukraine.

Most of the ‘Network’ defendants have said that they signed ‘confessions’ under torture, with the accounts given by Pchelintsev; Shakursky and others truly harrowing.  Both Pchelintsev and Shakursky say that electric shocks were applied, and Pchelintsev was also suspended upside down.

The torture methods used against the three St. Petersburg men were also documented by civic monitors.

“It is thus possible to state that the ‘Network case’, both its Penza and its St. Petersburg parts, is based entirely on torture and on the resulting testimony from the accused and witnesses.“ , Memorial writes, pointing out that such illegally obtained testimony is inadmissible.

Memorial adds that the investigation largely seemed to twist objective facts in order to fit the FSB officers conspiratory theory.  The description that the FSB have come up with for the training sessions and division of roles of the alleged ‘Network’ are, in fact, much more reminiscent of a group playing airsoft sport in teams than of a terrorist organization.

The claim that a small group of young men with left-wing views and no obvious psychological or social aberrations should have seriously been planning to overturn the political regime in Russia, Memorial says, seems wildly implausible and akin to fantasy. The FSB originally claimed that the participants in the alleged ‘Network’ had been planning terrorist acts for the World Cup in the summer of 2018, however in the final indictment, any mention of this vanished, leaving only planned ‘crimes’ in the vague and distant future.  The only real things in this case are the long sentences passed by the Volga District Military Court in Penza on 10 February.