Dutch Prosecutor accuses Russia of deliberately hiding important MH17 suspectIntercepted calls prove Russian government control of militants in Ukraine on eve of MH17Russia hides MH17 suspect, then uses him for lies about the disaster and about ‘civil war’ in UkraineHow can Russia deny responsibility for MH17 when it gave up Sentsov, others to get key witness out of Ukraine?MH17 suspect release incriminates Russia, but leaves Ukraine compromisedFamilies of MH17 victims call for honesty and justice from Russia as the lies continueThree out of four MH17 suspects are ‘former’ Russian FSB or military intelligence officersRussian Twitter ‘false flag’ operation to blame Ukraine for MH17 broke all recordsEuropean Court of Human Rights demands answers from Russia over downing of MH17 over UkraineNext step the Hague after Russian military source named for Buk missile that downed MH17Russian TV produces ‘witness’ of Ukraine downing MH17, then quickly removes reportRussian media twist Bellingcat study to find Ukrainian Buk in Donbas before MH17Incriminating Video, Endless Lies and Putin’s ‘Premature’ Tribunal on MH17Russian LifeNews inadvertently told the truth about downed Malaysian airlineMilitants accused of deliberately shooting at Severodonetsk residential areaSent to be shotThe EU’s Opaque Dealings with UkraineWhose anti-Semitic and Homophobic Choice?What should they talk about, Mr Putin?The Peace that chokes Russia
• Topics / Terrorism 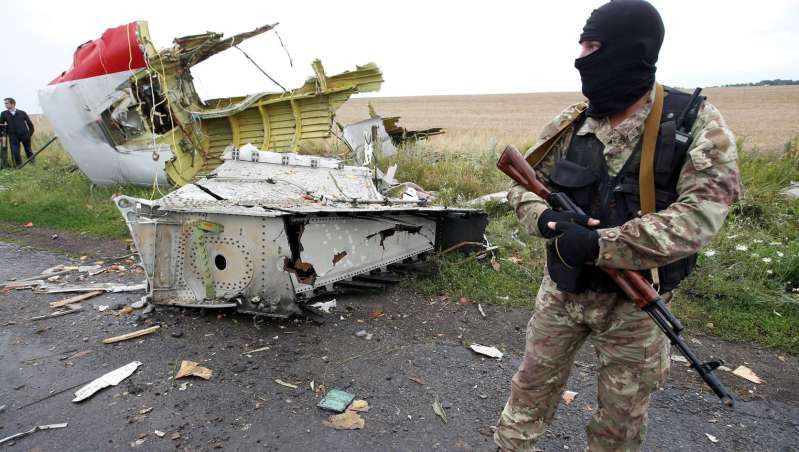 The Netherlands has rejected a Russian offer “to prosecute” three Russian former or current FSB and military intelligence [GRU] officers whose trial in absentia over the downing of Malaysian airliner MH17 is due to begin on 9 March.  Since Russia has refused to even reveal whether one of the suspects, Sergei Dubinsky, is currently a GRU officer,  the offer was evidently absurd and presumably made only so that Russia could then claim that it had tried to cooperate and been turned down.

In a letter to the Dutch Parliament on 12 February, the Dutch Justice Minister Ferd Grapperhaus revealed that a letter from Moscow had been received back in October.  This asked whether the Netherlands would consider handing over the criminal proceedings against the three men to the Russian authorities. Moscow was informed that this was not an option..

It is not clear whether Moscow expected the Dutch authorities to make the request public, but Russian state-controlled media are now actively pushing the line that this is a fake ‘trial’ and that Russia has been prevented from taking part in the proceedings.

In fact, it was Russia that used its power of veto in the UN Security Council to block an international tribunal into the downing of MH17 over militant-controlled Donbas on 17 July 2014.  The Joint Investigative Team and the Dutch Prosecutor’s criminal investigation into MH17 arose as a consequence of Russia’s obstruction.

That obstruction was, in fact, seen in the first hours after MH17 was downed by a Russian Buk missile when efforts were made to secretly get the Buk missile launcher back across the uncontrolled border into Russia.

Russia’s ‘offer’ in October 2019 is all the more incredible as it came just weeks after the Kremlin had made a vital exchange of Ukrainian POWs and political prisoners contingent upon Ukraine handing over Vladimir Tsemakh, a key MH17 witness and probable suspect.  In a video, Tsemakh can actually be heard admitting to a role in the attempt to conceal the Buk missile launcher, and since he is a Ukrainian national, there was no good reason for the Kremlin to be asking for him in exchange for Ukrainian political prisoners illegally held in occupied Crimea and Russia. Since Russia’s constitution only prohibits it from extraditing its own citizens, there was absolutely nothing to stop Moscow from acceding to the Dutch Prosecutor’s immediate request for Tsemakh’s extradition.  Instead, it quickly sent Tsemakh to occupied Donbas.  The Dutch Public Prosecutor has directly accused Moscow of getting Tsemakh out of Russia so that it would not need to comply with the European Convention on Extradition, and doing so to hinder the criminal investigation into a heinous crime.

One of the Russian commentators on the state-financed Radio Sputnik claimed that “Russia will not hand over its citizens, if only because we don’t fully understand what they are accused of, what the prosecution is based on.”

It should become fully clear on 9 March what the specific charges are against  ‘former FSB colonel Igor Girkin; possibly current GUR officer, Sergey Dubinsky; and former GRU special forces spetsnaz officer, Oleg Pulatov; as well as against one Ukrainian, Leonid Kharchenko. That does not mean that it is not broadly apparent now and Moscow has every reason to be worried about this trial and the ongoing JIT investigation.  One of the men, Pulatov, is also reported to have got himself Dutch lawyers to represent him in court.

On 24 May 2018, JIT concluded that “the Buk missile which downed Malaysian airliner MH17 on 17 July 2014 came from the 53rd Anti-Aircraft Missile brigade which is a unit of the Russian army from Kursk in the Russian Federation”.

At a press conference on 19 June 2019, the above four men were named as the first suspects whom the Dutch Public Prosecutor planned to put on trial for their part in MH17.  It was stated that “in the past all were sent abroad in the service of the Russian Armed Forces”. While none is accused of having fired the missile, the chain of command to Russia provided by the four men is believed to have played a direct role in getting the Buk missile launcher to Ukraine and subsequent events.

Moscow has assiduously pushed the line that any individuals caught in Donbas (or in other countries), or suspected of crimes, are private individuals.  This already looked like a weak argument in the case of MH17 given the DNA-level proof that the Buk missile came from the Russian 53rd Anti-Aircraft Missile brigade.

It was dealt another blow, or whole series of them, on 14 November 2019 when JIT issued a new appeal for witnesses, revealing at the same time just how much highly incriminating evidence of direct high-level Russian links with the Donbas militants controlling the territory they already have.  This includes intercepted calls, with some of them involving Girkin and another Russian militant leader  Alexander Borodai.  Girkin, Borodai and other Russians have always repeated Moscow’s line and pretended to be merely private individuals.  JIT makes it clear that this is contradicted by the witness testimony already received, and by the intercepted calls. In one of these conversations, for example, on 3 July 2014, Borodai can be heard stating that he is “carrying out orders and protecting the interests of one and only state, the Russian Federation’.

JIT reported that the testimony and other information reveal “that Russian influence on the DPR [the so-called ‘Donetsk people’s republic’] went beyond military support and that the ties between Russian officials and DPR-leaders appear closer”.  The investigators began their report by inviting testimony from any witnesses “who are able to testify about these command lines and the role that Russian government officials might have had.”

If that were not alarming enough for the Kremlin, JIT also posted several intercepted telephone calls demonstrating contact between DPR leaders and Russian government officials, including Vladislav Surkov, then the Kremlin’s person believed to be in charge of occupied Donbas, the Russian Defence Minister and FSB.  All of this was part of an invitation for other witnesses to come forward, and a very clear indication that the evidence is there.  Small wonder that Moscow would prefer a nicely controllable, and meaningless, homegrown ‘prosecution’.