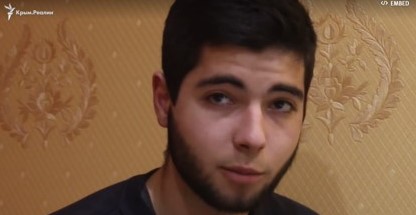 A 17-year-old schoolboy has become the latest victim of Russian enforcement officers’ torture methods in occupied Crimea.  How many other victims there have been is impossible to know, since not all have the courage shown by Server Rasilchak to lodge a formal complaint and openly recount their experiences.

Krym.Realii, whose journalist has spoken with Rasilchak and his mother, is still trying to contact the Russian police in occupied Crimea, and there is no way of independently verifying the information.  The problem is that, under Russian occupation, there effectively never are mechanisms for carrying out independent checks and enforcement officers are generally confident of total impunity.  Server’s story bears many similarities with other accounts of torture, and like those cases, it is backed by physical injuries which have been recorded.

Rasilchak is in the 11th grade, his last year at school and is underage, making all the actions of the enforcement officers entirely illegal.  Even had he been suspected of a crime, he should have been questioned in the presence of a parent, guardian or psychologist.  It is quite clear from his account that the officers did not want witnesses and with reason.

It was Lilya Rasilchak, Server’s mother, who first contacted Krym.Realii and who gave permission for her son to give a recorded interview about the torture he was subjected to by officers of the Saki police.

During the evening on 28 January 2020, Rasilchak’s father, he himself, his friend and friend’s girlfriend set off for Simferopol.  They dropped into a petrol station in Saki to get some water, and shortly afterwards were stopped by traffic police.  Rasilchak says they hadn’t even had time to get out their documents, when a Volkswagen Passat drove up and men in plain clothes got out.  They forced Rasilchak and his fellow passengers out of the car and made them lie on the ground, face down.

Another car turned up, this time with men in uniform and took them to the police station. Not, however, before one of the uniformed men had grabbed Server by the head and, using his knee, kicked the schoolboy in the groin.

At no point then, or during the next three hours at the police station, did any of the men identify themselves or explain why the car had been stopped, and why they had been taken to the station. Rasilchak knows that his chief torturer, and the man who initially kicked him in the groin, is called Alexander Vasilyevich, and only heard one other officer’s first name (Nikolai).  He has, however, been able to identify the three men involved from a photograph of the police staff.

Rasilchak was held throughout his ordeal with his hands behind his back in handcuffs. He was taken to a room on the fourth floor where the man called Nikolai started by telling him that there were many like him who didn’t understand what was happening, and who kept telling him “to think” when he asked why he was there, and what it was they were accusing him of.

Then Alexander Vasilyevich reappeared with an electric shock weapon, and asked the schoolboy how he was to talk with him “as with a person, or as with an animal?”

The lad, of course, answered “as with people”, but had no idea what to answer when Alexander Vasilyevich demanded that he “talk”.  His silence was punished by a first electric shock on his left leg.  He was told “to think” for another five minutes.  He assumes that when Alexander Vasilyevich left him for periods of five minutes, he went to his friend, and used the same methods against him.

Alexander Vasilyevich inflicted several more electric shocks and also threatened to inflict them through the anus.  At one point, they forced him to the ground, with Nikolai pressing his head to the floor.  His arms in the handcuffs were stretched upwards, and they pulled his trousers down and turned the electric shock weapon on.  They did not, however, attach it or use it on his genitals, with the aim clearly only to frighten him.  They also delivered several blows to his legs, his back and around the head.

After about three hours, they took the handcuffs off and put him in a chair.  He was told that they were accused of having stolen some money from an automatic car cleaning place. He couldn’t fathom this, he says, adding that they had only stopped at a petrol station, for water.

A little later, he smiled when one of the men made a joke.  The officer whose name he never heard got annoyed, and said “what do you think this is, a circus show?” and punched him in the jaw.

It was already very late in the night and at one point Rasilchak began dozing.  A man walked in, whom he assumes was one of the heads of the station, and demanded to know why he didn’t get up: “Have you Crimean Tatars not been taught rules of behaviour?”

This prejudiced remark was from a man who clearly knew that his staff had just tortured a schoolboy.  Why otherwise would the lad have been forced to sign a piece of paper, addressed to the head of the station, Dmitry Alexandrovich Stryukov, claiming that the police did not use force?

The stress for the young boy was appalling, not least because he had no idea whether his father was even alive.  He says that he had last seen his face, after they had been forced out of the car and on to the ground, and it was covered in both dirt and blood.

The following day, Server Rasilchak, who is unable to move his thumb after the treatment he received, got his injuries recorded and lodged a complaint with the Razdolne district police.  He says that he is not afraid and wants his tormenters to be punished.  Otherwise it will be him who was beaten today and somebody else tomorrow.

His story is especially shocking because of his age.  Unfortunately, in no other way is it exceptional.  Virtually all of the Ukrainian political prisoners arrested on supposed ‘sabotage’ charges have said that their videoed ‘confessions’ were extracted through torture.  Yevhen Panov and Andriy Zakhtei have described in detail the methods used, with these including being suspended in handcuffs; mock executions; electric shocks and clamps applied to his genitals. These methods are often used while men are held incommunicado and under enormous pressure to provide ‘confessions’ that incriminate both them and others.  The huge sentences against Ukrainian filmmaker Oleg Sentsov and civic activist Oleksandr Kolchenko were based solely on ‘confessions’ tortured out of two other men, one of whom (Hennady Afanasyev) retracted them in court.

There are very strong grounds for believing that the Russian FSB have detained and tortured a number of men in order to extract false testimony for politically motivated trials.  This was probably the case with a prosecution witness in the trial of 22-year-old Dilyaver Gafarov, and at least one Crimean Tatar left Crimea after being interrogated by the FSB on 11 February 2016 and fearing that the torture could finally force him to bear false witness.

It seems likely that in some cases, the FSB are using these methods to get a kind of ‘blank confession’, to be used when the need arises.  31-year-old Rinat Paralamov  was effectively abducted on 13 September 2017 and savagely tortured. He was told he had two ‘choices’.  Either he lost his health and did what they said, or he did what they said, without any damage to his health. After that they used electric shocks from which he several times lost consciousness.  It was after they threatened to first rape him, using barbed wire, and then his wife, that Paralamov  agreed to sign their documents.  One was an ‘interrogation’ protocol in which he ‘confessed’ to having found an explosive substance and bullets and hidden them, that he was a member of Hizb ut-Tahrir, the peaceful pan-Islamist organization which is legal in Ukraine and most countries, but which Russia has claimed is ‘terrorist’, etc.

They also got him to sign a document saying he had left the FSB at 4 p.m. on 13 September, and ‘voluntarily’ returned to confess the following day after spending the night in a park.  Another document claimed that he had “voluntarily agreed to cooperate with the security service’.  They did not specify what exactly his ‘cooperation’ was to entail, but did get him to speak on a video, both then and the following day in the forest where he supposedly indicated where he had found the secret stock of explosives.

Paralamov  had the courage to immediately state publicly that he had been tortured, although some of the details he waited to reveal until after he had managed to get his wife and children safely out of Crimea.  Like 17-year-old Server Rasilchak, Paralamov  explained that he had no choice: “If I don’t speak out, they’ll come for others”.