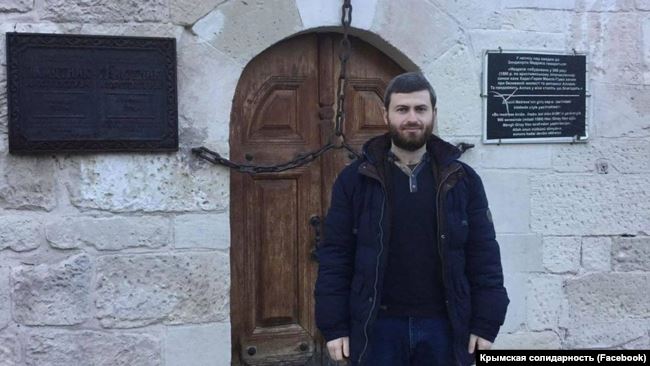 Russia is illegally applying its dangerously fuzzy legislation on “unlawful missionary activity”, with the latest target a Muslim prosecuted for leading the daily prayers in a mosque.

On 2 March, after seven hearings, Yelena Klepova, from the ‘magistrate’s court’ in occupied Simferopol found Rasim Dervishev, the Imam of the mosque, guilty of ‘missionary activities’ and imposed a five thousand rouble fine.

Dervishev’s lawyer, Aider Asamatov has explained that during prayers on 3 December 2019, a stranger walked into the mosque, stood there for a few minutes, evidently took a five-second-long video and then left. When the worshippers came out of the mosque after prayers, FSB officers were already waiting.  They charged Dervishev under article 5.26 part 4 of  Russia’s code of administrative offences with unlawful missionary activities. Asamatov is adamant that you can’t call holding the namaz or Salah, the daily prayers, missionary activities, and believes that this is merely an attempt to put pressure on the imam. The ruling will, of course, be appealed.  Dervishev himself points out that all those present were ordinary worshippers at the mosque and there wasn’t anybody for whom he could have engaged in “missionary activities”.  During the hearings, this was essentially confirmed by most of the witnesses.

Krym.Realii reports that three ‘experts’ were called to prove the charges, however, that has also been of strictly limited use for the FSB.  Two of the three, Aider Bulatov and Emir-Asan Umerov, who both have specialist knowledge of Islam, said that they could not determine whether there were any elements of missionary activities in the imam’s actions that day.  One person alone – Olga Griva, head of the department of religious studies at the Russian occupation Vernadsky University, found the missionary activities claimed by the FSB.  Asamatov notes that Griva called all of Dervishev’s actions on the video “missionary activities” and questions her competence on questions regarding Islam. “In response to our questions as to how, in a five-second video and photographs, she had discovered signs of an infringement, she answered that the person on the video, who looked like Rasim Dervishev, was facing people, he was looking at them and the Koran was before him.  That, in her opinion, constituted signs of missionary activities. She also said that if, during the Ramadan Fast, a person of another faith sits at the same table as a Muslim and eats, that can also be viewed as missionary activities. “

Griva’s education is in history, with her specialization being archaeology and ancient history.  It is only since 2014 that she has lectured in religious studies, and felt able to draw conclusions regarding “missionary activities” in accordance with Russia’s very vague and questionable interpretation and FSB demands..

She told Krym.Realii that over the last three years, at the request of various agencies (first and foremost, one imagines, the FSB), around 15 ‘experts’ have been trained.

Griva is, unfortunately, not the only person taking part in highly dubious ‘expert assessments’, which often result in criminal ‘trials’ for a person’s faith or civic activism.

While the standard FSB ‘experts’ on most of the trials of Crimean Muslims are from Bashkortostan in the Russian Federation, there is at least one other notorious Crimean academic, Andrei Nikiforov, who has provided the ‘assessments’ demanded by the FSB in several political cases.  See: ‘Expert’ who helped jail Crimean Tatar lawyer for Facebook post called for “rabid Ukrainians to be killed”

This is hardly surprising when Russia has begun seriously persecuting the Jehovah’s Witnesses, and using FSB officers coming to meetings, illicit recordings, etc. in trials that could result in believers Serhiy Filatov and Artem Gerasimov being sentenced to 7 and 6.5 years’ imprisonment, respectively.  Such methods are also used against Muslims, with the sentences ever worse.