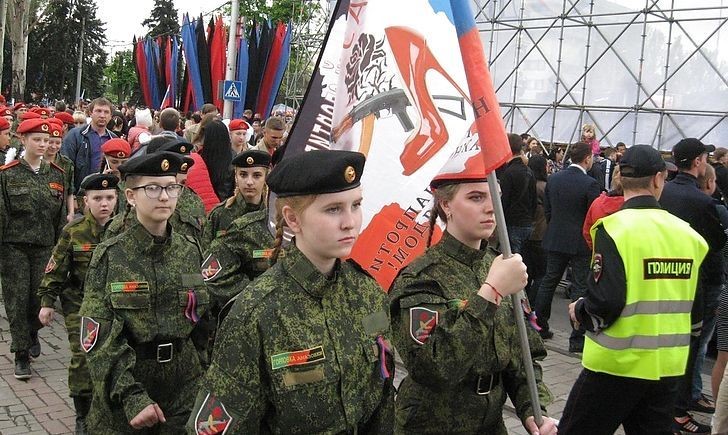 The self-proclaimed and Russian-controlled ‘Donetsk people’s republic’ has announced that Ukrainian will no longer be a ‘state language’ in the pseudo republic, and has claimed that this status will be held by Russian alone The move is explained as being in recognition of “the integration processes between ‘DPR’ and the Russian Federation”, and makes a nonsense of western-supported plans for reintegration of the so-called ‘republics’ with the rest of Ukraine.

It was reported on 6 March that the self-styled ‘DPR parliament had voted to change the ‘constitution’, stripping Ukrainian of its state language status. It was claimed that the bill “is aimed at the defence and support of the Russian language as state language of the Donetsk people’s republic”.  It awaits only the signature of the so-called head of ‘DPR’ to come into force. Amendments to a real constitution are not made in such a way, but this is a meaningless document of a pseudo ‘republic’ which even Russia has stopped short of formally recognizing.

The report cites an official as claiming that this ‘law’ does not violate the right of citizens to use Ukrainian in private conversation or in education.  Such assertions are effectively meaningless.  In December, ‘DPR’ leader Denis Pushilin first proposed stripping Ukrainian of its official status, and introduced ‘a bill’ proposing to make only the study of Russian compulsory in schools, with Ukrainian optional, “depending on the wishes of parents and the capacity of the educational organization”.

It seems unlikely that any but the most daring of parents will insist on education in Ukrainian since such a ‘pro-Ukrainian’ position could well get them arrested as spying for the Ukrainian Security Service or Armed Forces.  The same very probably applies to speaking Ukrainian in everyday communication.

Ukrainian teachers are known to have been retrained to teach Russian and the number of hours assigned to Ukrainian was cut back in 2014.  With the Ukrainian textbooks used nationwide almost certainly rejected on political grounds, the ‘authorities’ can also claim that a school is unable to teach Ukrainian because they don’t have textbooks.  A lot of the other textbooks are illegally provided by Russia.

The mantra-like repetition by ‘DPR leaders’ that they are “defending” the Russian language stems from Russia’s narrative about the war in Donbas being “in defence of Russian speakers”.   Russia has constantly pushed the line that Russian speakers faced persecution and restrictions in Crimea and Donbas,  Unless you consider it ‘persecution’ that citizens of a country learn the state language of that country, this was never the case.  In both Crimea and Donbas, Russian was commonly and completely freely used in both private and official communication.

It was the Ukrainian language that immediately came under attack as soon as Russia took actual or effective control, as well as Ukrainian history and culture.  It was reported by the generally Kremlin-loyal ‘Vzglyad’ newspaper back in June 2017 that ‘DPR’ had totally gone over to Russian-language classes. It was claimed, of course, that the teaching of Ukrainian for one hour a week, if at all, in occupied Crimea or Donbas was due to lack of demand.

A study carried out by Dmitry Durnev in September 2019 pointed out that, although Ukrainian was still (then) given as the second ‘state language’ after Russian in the so-called ‘Donetsk and Luhansk people’s republics’, no official proceedings were carried out in Ukrainian. After a transitional phase from 2014 to 2016, all Ukrainian schools and classes were already in Russian.