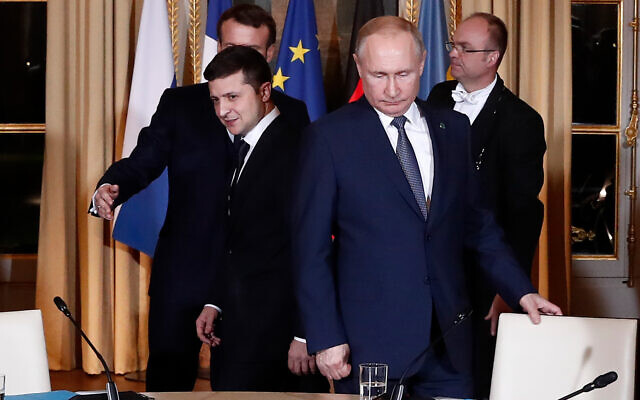 There has been outrage since a document signed on 11 March in Minsk was published by the Ukrainian media and it became clear what the Ukrainian side had agreed to.  Civic activists, political analysts and even 50 MPs from the party associated with President Volodymyr Zelensky have warned that the agreement signed by, among others, the head of the President’s Administration, Andriy Yermak, would cross a vital red line.  It is also extremely worrying that news of what appears to be a shift in Zelensky’s public position emerged only because the document signed was reported in the media.  Small wonder that one of the public statements issued on 13 March suggested that Zelensky’s administration might be trying to push through this unacceptable move at a time when the coronavirus crisis has led to restrictions on mass gatherings, including protests.

Since 2014, Ukraine has consistently rejected Russia’s efforts to force direct negotiations with the so-called ‘Donetsk and Luhansk people’s republics’, since these are artificial formations which Russia controls.

The document signed on 11 March envisages the formation of an ‘advisory council’ with 10 representatives from Ukraine, 10 from the Russian proxy ‘republics’.  Russia would have only ‘observer’ status, with this effectively likening the aggressor state to the OSCE, Germany and France.  Although the ‘council’ would draw up proposals on, for example, highly contentious constitutional amendments that Russia is seeking and local elections in occupied Donbas, any decisions would be of an advisory nature, and not binding.

Whether or not this council ends up stuck in endless ‘discussion’ does not change the fact that its very creation is essentially legitimizing formations which Russia has, from the outset, funded, manned and controlled.   The ‘republics’ have been made a side in negotiations which is exactly what Russian President Vladimir Putin has been seeking since 2014.  Such direct dialogue with the Donbas militants is something that Zelensky has said on several occasions would be inadmissible.

During a talk show on Friday evening, Yermak denied that there had been any shift in position and asserted that the sides of the conflict at the Trilateral Contact Group meeting in Minsk remain Ukraine and Russia.  In a statement forced from him after Dzerkalo Tyzhnya revealed the signed document, he asserted that the agreement did not create any legal basis for recognition of the militants, and also insisted that there was no fait accompli as yet, with the document signed in Minsk being only a declaration, with no legal force.  It was an unconvincing performance, with Yermak unable to explain who would be “representing” the pseudo republics, but claiming that the move was aimed at allowing Ukrainians living in occupied territory to “have a voice”.  This is at a time when we know that expressing any pro-Ukrainian sentiments in the so-called ‘republics’ are likely to get you accused of ‘spying for Ukraine’ or ‘treason’ and imprisoned.

It is true that the document agreed on 11 March must be signed at higher level towards the end of March.  It is to be hoped that Zelensky will understand the anger that this move provoked, as well as the underhanded manner in which it was carried out, and will decide to reject it.

As mentioned, 50 MPs (so far) from Zelensky’s Servant of the People party signed a statement on 13 March, in which they stressed that any direct negotiations with the proxy ‘republics’ was unacceptable.  They also said that they shared civic concern about other statements made by high-ranking officials, regarding possible reinstatement of water supplies to occupied Crimea and the labelling of the war in Donbas “an internal conflict’.  With respect to the agreement reached on 11 March, the authors point to Ukraine’s Law on occupied territory in the Donetsk and Luhansk oblasts which clearly identifies the Russian Federation as occupying this territory.

In a statement (open for endorsement here) on 13 March, the Ukrainian Helsinki Human Rights Union warned that the 11 March decision carries the risk that inadmissible red lines will be crossed.  The authors stress that “the Russian Federation, which is the initiator and aggressor in this armed conflict virtually always has the deciding voice in taking decisions on releasing people imprisoned on non-government-controlled territory. However, it must bear responsibility for the consequences of its aggression.

Taking Russia away from the negotiating table as a party to the conflict and giving it status of observer, as seen in Item 2 of the document published, is a worrying trend towards trying to waive Russia’s liability for its aggression”.  Any legitimization of the illegal formations known as the so-called ‘DPR’ and ‘LPR’ or negotiations with such formations about waiving liability for grave crimes committed during the establishment of the so-called ‘republics’ would cross a red line and be totally inadmissible.

A number of other human rights and media groups issued a separate statement which also stresses that any direct dialogue with the proxy ‘republics’ is unacceptable and in breach of the above-mentioned law.  This law makes recognition in any form of the so-called authorities in ‘DPR/LPR’ impossible.  Any negotiations on ending the conflict in Donbas must be solely with the Russian Federation and its representatives, with international partners as intermediaries.

The authors point out that there has, up till now, been a critical difference.  Although representatives of the so-called ‘republics’ were present at the Minsk negotiations, they did not have the right to vote.  “Raising them to the status of autonomous players will make it possible for Russia and the international community to treat the armed conflict on Ukrainian territory as “an internal conflict”, and not the result of armed aggression by the Russian Federation against Ukraine”.

As mentioned, the authors suggest that Ukraine’s leaders may have taken the decision now, making use of the restrictions over the coronavirus pandemic to avert widespread protests.  Whether or not this influenced the timing, it is difficult not to agree that the move, and secrecy around it, can only erode trust in the current administration and their assurances.  Zelensky may genuinely want peace in Donbas, but playing into Putin’s hands by negotiating with the latter’s puppets will not bring peace closer, and he should understand that this is a price he has no right to make Ukraine pay.