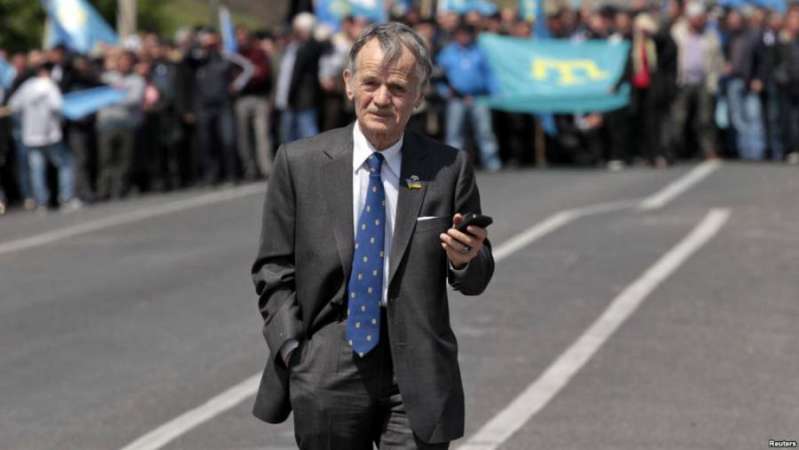 Veteran Crimean Tatar leader and Ukrainian MP, Mustafa Dzhemilev, has been informed that the Russian Investigative Committee will be formally laying charges against him on 10 April 2020.  The most grotesque of the three charges listed is of “illegally crossing the state border of the Russian Federation”.  This is how the invading power describes Dzhemilev’s crossing the administrative border from mainland Ukraine to his native Crimea in May 2014, after Russia banned him from his homeland.

Since the ‘criminal proceedings’ were initiated back in 2014, this new ‘notification’ seems like somewhat comical sabre-rattling, on a par with the new charges brought against Refat Chubarov, Chair of the Mejlis, or self-governing body, of the Crimean Tatar people in March.   Russia is, presumably, rattled by the plans to hold a March of Dignity on Crimea, and is trying to foist the idea that world-respected Crimean Tatar leaders are ‘wanted men’.  The March of Dignity has had to be postponed because of the coronavirus pandemic, but is an important initiative which will be held as soon as possible, and both Moscow and the occupation regime have already been hurling threats against those participating.

Mustafa Dzhemilev was just six months old when, on Soviet dictator Joseph Stalin’s orders, his family, and the entire Crimean Tatar people, were deported from Crimea, a crime recognized by Ukraine as an act of genocide.  He spent 15 years in Soviet labour camps for his peaceful struggle for human rights and for the right of his people to return home, to Crimea.  Within a month of Russia’s invasion and annexation of Crimea, he had become the Kremlin’s enemy No. 1 for his and the Mejlis’ implacable opposition to Russian occupation.  It is probably no accident that Dzhemilev first learned of the ban three days after his arrival in Simferopol a month after annexation.  His first act was to order that the Ukrainian flag be reinstated over the Mejlis building in its rightful place next to the Crimean Tatar flag.  By 22 April,  Dzhemilev had been handed a scrappy document which called him a ‘foreign national’, as a citizen of Ukraine, and banned him from entering Crimea under Russian occupation until April 19, 2019.  Both Moscow and the leaders it installed in Crimea cynically denied any knowledge of this ban for the next 10 days, until it was enforced on 2 May.

Within months,  Russia had also banned Chubarov, and had begun the repressive measures against the Mejlis which were to result in the politically-motivated imprisonment of Deputy Mejlis leader Akhtem Chiygoz and the ban on the Mejlis.

Russia’s repressive measures became especially inadequate after Dzhemilev and Chubarov initiated the Civic Blockade of Crimea, presenting specific human rights demands, including the release of all political prisoners.  Russia began using its propaganda media to push the absurd claim that Dzhemliev was ‘recruiting fighters for the so-called Islamic State’.

Then in January 2016, it became clear that criminal charges had been laid against Dzhemilev and an arrest warrant issued against a man whom Russia had itself banned from his homeland.  The first charge, under Article 322 § 3 of Russia’s criminal code, was known at the time, though the extraordinary cynicism of accusing him of “illegally crossing Russia’s state border remains as staggering now as it was back then.

He is also accused of illegal possession of a firearm under Article 222 § 1 and carelessly storing a firearm, creating a danger to others, if that resulted in the death of a person or other grave consequences (Article 224 § 1),  The latter two charges are presumably connected with a tragic accident in which Dzhemilev’s son, Khaiser accidentally killed a man. The accident had happened long before annexation, and Russia had no right to prosecute Khaiser Dzhemilev or imprison him in Russia.  Moscow’s obvious use of Khaiser as a hostage, to put pressure on his father, was condemned by the international community, however the young man was forced to serve an illegal sentence in a Russian prison to the very last day.  It would appear that Russia has now pulled out that accident from 2013 against Mustafa Dzhemilev as well.

An ‘arrest warrant’ was issued by a Russian-controlled ‘court’ in Simferopol in 2016, with the ‘investigators’ claiming that this was warranted because Dzhemilev “was hiding from the investigators and the court”.  He was not in hiding, but banned from his homeland

Russia’s ban forcibly exiling Dzhemilev from Crimea was upheld by Russian courts, who chose to believe that the Crimean Tatar leader was “a threat to national security”.  The ban is now awaiting assessment by the European Court of Human Rights.