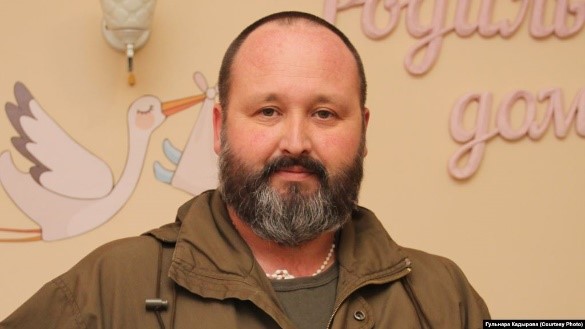 Ivan Yatskin, a Ukrainian from Crimea whom Russia has charged with ‘treason’, is to remain imprisoned in Moscow despite medical conditions which put him in particular danger if infected by Covid-19.

The 41-year-old Ukrainian took part in the court proceedings by video link from the SIZO [prison], but did at least have the opportunity to speak for a few minutes with his lawyer, Nikola Polozov.  It turned out that the mask he was wearing had been handed to him immediately before the hearing “to demonstrate concern for the prisoners to the court and parties to the proceedings”.

Such concern is certainly not evident in the Lefortovo SIZO where the cell Yatskin is held in is disinfected only once a week.  In the midst of the coronavirus pandemic, the prison staff are giving the prisoners half an onion as an anti-virus measure, but do not measure their temperature.  It is particularly worrying that because of the pandemic, all food and other parcels to the SIZO have been stopped since the prison food is appalling and cannot provide the nutrition needed.

The hearing at the Moscow City Court was to consider an appeal brought by the defence against the extension of Yatskin’s detention.  Such hearings in the case of Ukrainian political prisoners are generally a pretence, with their rejection predictable.  This time, however, there were other clear grounds for releasing Yatskin whose life would be in danger if he contracted Covid-19.  All the medical documents to confirm this were provided, however the prosecutor claimed there to be no grounds for changing anything and judge Natalya Kononvalova went along with him, upholding Yatskin’s detention until 16 June.

The Russian FSB have also prevented Yatskin from receiving visits from the Ukrainian consul, citing his Russian citizenship.  Yatskin has two children from a previous marriage, as well as three with his current wife, the third, a daughter, having been born after his arrest.  Any parent in occupied Crimea was essentially forced to take Russian citizenship in order to work, register children in schools and with a doctor, etc.

Yatskin was arrested in Crimea on around 15 October 2019 and taken immediately to the FSB’s Lefortovo Prison in Moscow, where he has been imprisoned ever since. It was ony on 24 December that TASS reported his seizure, claiming that “a Russian” had been charged with state treason, in the form of spying, under Article 275 of Russia’s criminal code.  Yatskin is a Ukrainian citizen, who was born in Crimea and lives in Simferopol.

Such secrecy and ‘special operations’ have been used against Ukrainians before, with men held incommunicado and without any access to independent lawyers.  The aim is to force a person, through physical torture, threats, etc., to agree to admit to the charges.  The ‘lawyers’ provided are generally there to sign documents and convince the person that they have no option but to ‘confess’.

It seems clear that these methods failed against Yatskin.  In January, Polozov, who has defended a number of Ukrainian political prisoners, announced that he would be representing Yatskin at the  request of the latter’s family.  He reported that the FSB are claiming that Yatskin gathered and passed on information constituting a Russian state secret to the Ukrainian authorities.  The charges could carry a sentence of 20 years’ imprisonment.  Polozov said then that he believed that Yatskin had been placed under enormous psychological pressure, including through threats to the members of his family who remain in Crimea.

Yatskin was very open in expressing pro-Ukraine views, and human rights groups are convinced that the charges against him are politically-motivated.  The Crimean Human Rights Group points out that “the persecution of a Ukrainian citizen under Article 275 of Russia’s criminal code (state treason) which applies only to Russian citizens is one of the consequences of the violation of international humanitarian law in the form of ‘automatic’ (foisted) Russian citizenship for Crimeans”