In a report, posted on 15 April, the FSB claimed to have “broken up activities of the Ukrainian Defence Ministry’s Military Intelligence Department aimed at organizing and carrying out acts of sabotage – terrorism, stealing information containing state secrets and recruiting Russian citizens”.  These alleged ‘activities’ were purportedly organized by Lieutenant Oleh Alisherovych Akhmedov, the head of a department of military intelligence located in Kherson.   The group of 'agents', whom Akhmedov is supposed to have been in charge of, included a Russian military servicewoman and a male Ukrainian citizen.  No names or details are given, however the journalist initiative Grati has learned something of the case after speaking with the lawyer of the detained woman and some other unnamed sources.

The woman is understood to be living in Feodosia with a small child.  She was arrested on 24 March and charged with ‘state treason’ (Article 275 of Russia’s criminal code).  It seems she ‘admitted guilt’, saying that a Ukrainian citizen, her former husband, had recruited her several years after they parted and that she had passed him documents of the military unit in which she worked.  Due to her underage child, she was placed under house arrest.

The ‘Ukrainian citizen’, who is presumably the woman’s ex-husband and probably the main target in this case, was taken immediately to Moscow where he is being held in the FSB-linked Lefortovo SIZO [remand prison].  He is charged with ‘spying’  (article 276), with this meaning that his ‘trial’ will almost certainly be held behind closed doors.  This is especially worrying since this case appears to be based on ‘confessions’ of two people who were under the total control of the FSB.

The FSB assert that information about the activities of the two individuals was received as part of ‘an investigation’ linked with the prosecution of another Ukrainian, Denis Kashuk.  He was sentenced on 6 April 2020 to 3 years and 8 months’ imprisonment by ‘judge’ Larisa Likhacheva from the Armyansk District Court on charges of possession of ammunition and explosive substances and of smuggling explosives.

40-year-old Kashuk disappeared on his way to work in a Simferopol advertising agency on 17 December 2019.  A day later, the FSB admitted he was in their custody and carried out a search of Kashuk’s home.  This was, however, only after the Russian-controlled police showed extraordinary alacrity in responding to Olha Kashuk’s report that her husband had vanished and took DNA material.  In virtually all Russia’s ‘Ukrainian saboteur’ political trials, DNA samples, obtained illegally, have later been used as ‘evidence’ against those arrested.

Kashuk agreed to plead guilty and it is, therefore, impossible to state with any certainly that the charges were unfounded.  There are, nonetheless, enough reasons to feel strong concern that his testimony is now being used in other prosecutions.

During the ‘court hearing’, Kashuk stated that in the Spring of 2016 he had applied to renew his Ukrainian passport in Kherson and had been invited for a chat by officers from Ukraine’s military intelligence (HUR). During this conversation, he was told that the advertising agency where he was working had carried out several contracts for the Russian occupation authorities.  He was told that this constituted collaboration with the occupation regime and that he could rectify the situation by providing HUR with information they needed.  He asserted that he had been forced to agree, and that in November 2017 he had been given literature about various forms of explosives, and trained in using a pistol and machine gun.  He claimed that on the same day, he had returned to Crimea, being given a plastic bag with a liquid explosive substance and explosives concealed in washing powder.  He had purportedly communicated with the HUR officer via WhatsApp, and had repacked the explosives and hidden them in two different hiding places.

There is no verifiable evidence to back these charges, only the testimony of a man who had been held incommunicado for at  least 24 hours before the FSB admitted to holding him.  It is possible that physical methods of torture were also applied, but we do know from Kashuk’s mother that her son told her that he had agreed to plead guilty in order to protect his family from persecution.  A week later, from mainland Ukraine, she informed Krym.Realii that, in her very brief conversation with her son before the detention hearing on 20 December, he had asked that the entire family leave Crimea immediately. 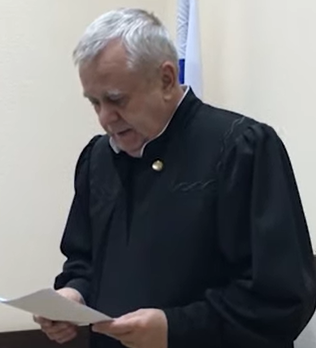 Andrei Dovhopolov, wanted in Ukraine for treason and breaking records for political rulings in occupied Crimea

The Crimean Human Rights Group notes that it was ‘judge’ Andrei Dovhopolov (Russian Dolgopolov) from the Kievsky District Court in Simferopol, who remanded the ‘Ukrainian citizen’ in custody and imposed house arrest on the Russian military servicewoman.   Dolhopolov is wanted in Ukraine for treason, and has been a ‘record-breaking’ in issuing politically-motivated rulings for his Russian paymasters.