Desperate plea to Zelensky from relatives of hostages once again forgotten 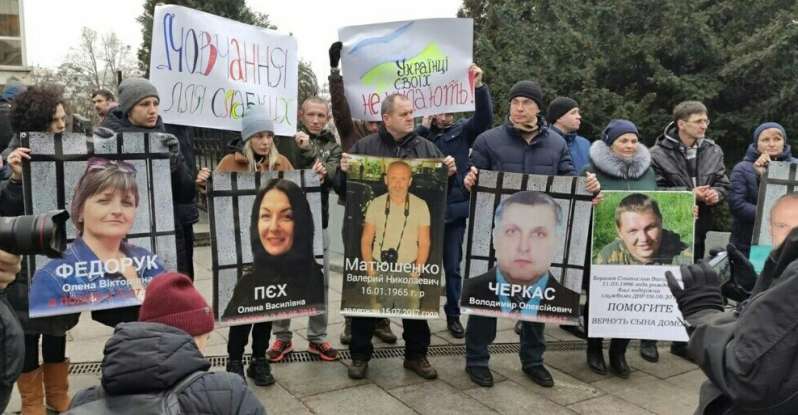 Any negotiations on securing the release of Crimean Tatar and other Ukrainian political prisoners held in Russia and occupied Crimea have been suspended, and the promised large exchange of hostages and POWs imprisoned in occupied Donbas looks set to be extremely modest.   Relatives of hostages who have been on the exchange list for a year or even two or three have prepared a moving video appeal asking President Volodymyr Zelensky to talk with them.  Many express bitterness that more is not being done as their relatives are imprisoned for their loyalty to Ukraine.

A long-awaited exchange is due to take place before Orthodox Easter, probably on 17 April.  The list of 19 hostages – 8 from the so-called ‘Donetsk people’s republics’ [DPR], and 11 from the ‘Luhansk people’s republic’ [LPR} is, however, much smaller than initially promised.  The list from DPR, in particular, is made up of largely unknown names.  This was noted by former hostage Stanislav Aseyev who pointed out that none of the names which he had personally give to President Zelensky were on the list.  It is unclear at present whether this is all there is to be for half a year or more, or whether there are to be such small exchanges fairly regularly.  It is obviously worth trying to get even five or ten people out each time if this is once a month.  If no more than 19 or 20 are released and then we hear nothing more for half a year, then this, Aseyev believes, is essentially just a political stunt.

Aseyev was not the only former hostage who made sure that information about fellow Ukrainians still imprisoned was passed on to Zelensky and to the SBU [Ukrainian Security Service who is responsible for the exchange list). It does, therefore, seem strange that, aside from POW Mykola Hrynenko, the names on the DPR list are unknown.

The 11 people from LPR hopefully include university student Serhiy Rusinov who is believed to have been seized for his pro-Ukrainian views and 57-year-old Serhiy Myronych from Luhansk.  The latter has been imprisoned since Independence Day (24 August) in 2016.  He was accused of trying to blow up the Luhansk oil refinery and ‘sentenced’ by a so-called military court to 20 years’ imprisonment for what they termed ‘state treason’.

It is not possible to know, and unwise to speculate, about why any given hostage was seized by the militants until they are safely on government-controlled Ukrainian territory.

Radio Svoboda does, however, report that, according to their source in the SBU, the list of people whom the so-called ‘DPR ombudsperson’ Darya Morozova said they were prepared to exchange contains people whose sentences are not ‘political’.

Tetyana Matyushenko, whose husband Valery has been imprisoned since July 2017, is one of several women who have addressed an open appeal to President Zelensky.  She says that she is happy that there is to be an exchange, but expresses frustration that people “who have no connection to the conflict in Donbas” end up on the exchange list, while so many people imprisoned for their commitment to Ukraine do not.  She suggests that perhaps it’s time for Zelensky to draw attention to those people, and asks him to heed them (relatives of the hostages) and speak with them. Essentially the same request is made by relatives of POWs Yuri Hordiychuk; Ihor Myrochuk and Vitaly Chmil;  Stanislav Baranov, imprisoned since 2017;  civilian hostages Olena Fedoruk and Olena Pyekh, a scientific researcher, originally from Horlivka who was seized in 2018 when she returned to visit her elderly mother; Valeri Matyushenko; Yevhen Stavtsev (also held prisoner since 2017); and Hryhoriy Sinchenko, seized and tortured for the second time.