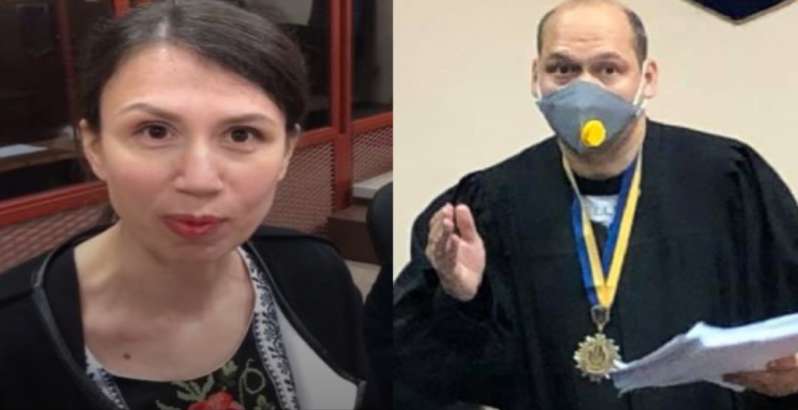 A judge who gained notoriety under President Viktor Yanukovych for his role in political persecution has placed ex-MP, investigative journalist and Maidan activist Tetyana Chornovol under 24-hour house arrest.  As if the symbolism behind that were not bad enough, the move coincided with the refusal of one of his colleagues to extend the house arrest of Volodymyr Kosenko, a former Omega special forces officer, accused of killing one Maidan activist and seriously wounding another.  In both cases, the prosecutor had supported the application for house arrest, or its extension, but there the similarity ends.

As reported, Kosenko was arrested on 18 February 2020 and charged with the murder of Maidan activist Oleh Ushnevych and the attempted murder of Vitaly Hukov, as well as of exceeding official powers.  He is accused of having deliberately aimed and shot at protesters on Instytutska St. on the morning of 20 February 2014.  The prosecution asserts that the Omega officers worked closely with Berkut officers and that they were shooting, without attempting to ascertain whether those they were targeting were unarmed.

During the hearing in the Pechersky District Court on 19 February, prosecutors asked for 33-year-old Kosenko to be remanded in custody on the grounds that he could abscond, as have other officers, who are now in hiding in Russia. The charges are serious, and if convicted, he could face anything up to life imprisonment.  Judge Oleksiy Sokolov refused to remand Kosenko into custody, but did order him to be placed under house arrest and said that he must wear an electronic bracelet.

Any such ruling is only for two months, and the same court was asked by the prosecutor on 16 April to extend the same house arrest with electronic bracelet for a further 2 months.

Judge Tetyana Ilyeva rejected the application, removing even the obligation to wear an electronic bracelet.

The hearing on Kosenko might easily have passed unnoticed, had it not been for the parallel hearing over a ‘preventive measures’ with respect to Tetyana Chornovol,.  The latter became known far beyond Ukraine for her exposure of corruption among the top echelons of power under Yanukovych, and because of a savage attack in December 2013 which was doubtless intended to be fatal.

It became known on 10 April that the State Bureau of Investigations had informed Chornovol that she was under suspicion of murder, with the charges also pertaining to the Revolution of Dignity, or Euromaidan.  She is accused of having led and taken part in setting alight the then ruling Party of the Regions’ Office in the centre of Kyiv on 18 February 2014 and of having caused the death of Volodymyr Zakharov, a 66-year-old employee

Chornovol’s outrage over what she called persecution by the same people who, in December 2013, had tried to kill her, was, and remains, very widely shared.  Scepticism over the charges have been confirmed by both Serhiy Horbatyuk, the  former Director of the Department for Special Investigations which was in charge of most Maidan cases, and by Maidan prosecutor Oleksiy Donsky.  Horbatyuk stated that same day, and has since reiterated, that his department had investigated the fire and that, on the basis of the material gathered, he saw no grounds for the charges now brought against Chornovol.  He explained that Zakharov had had plenty  of time to leave the building and could have done so unobstructed.  He had, unfortunately, stayed to collect the CCTV cameras, and had died of smoke inhalation.

On 14 April, Donsky reacted to claims by the State Bureau of Investigations [SBI] that there had been no violence against Maidan activists before the arson attack.  He dismissed such assertions, saying the investigators had established that, at the time that the Party of Regions building was set alight, there had already been cases of mass use of violence against protesters, both by the enforcement bodies, and by the so-called ‘titushki’, or government-hired thugs.

This is important for two reasons.  Chornovol does not deny her involvement in the fire, but has said that she and her husband were trying to distract the attention of enforcement officers in order to save Maidan activists, and to get the ‘titushki’, or government-hired thugs, away from Maidan.

The assertion that the setting alight of the building preceded any violence and the implied cause and effect between the two came in an extraordinary SBI statement issued on 14 April.  Although the title claimed that SBI is apolitical, the text itself seemed highly manipulative.  It is not, in principle, relevant whether there was violence before the fire or not, however , as Maidan lawyer Yevhenia Zakrevska pointed out, the argument is ominously familiar, having been repeatedly pushed by the lawyers representing Yanukovych in his trial in absentia for treason.  Since the statement tries to deny the involvement of SBI First Deputy Director Oleksandr Babikov in the decision to prosecute Chornovol, such echoes are particularly telling given Babikov’s role as one of Yanukovych’s lawyers.  It is difficult not to feel concern about the motives for Chornovol’s prosecution when SBI is openly rejecting the opinion of the main investigators into Maidan crimes, and, in an unsigned statement, trying to undermine their investigation.

See:  Charges against Tetyana Chornovol play to Yanukovych and Russian lies about Maidan

There has been concern for some time over efforts to discredit Euromaidan and, effectively, to turn victims into perpetrators, while quietly dropping the criminal proceedings against the latter (details here).

The fact that the prosecution had asked for Chornovol to be placed under house arrest was already worrying.  The fact that the application was heard by judge Serhiy Vovk was chilling in its symbolism.

In post-Maidan Ukraine, attempts were  made to remove Vovk’s immunity and to prosecute him over a ruling by which, according to the prosecutor, he had illegally deprived somebody of their property. He was even suspended from his position in 2015 but then reinstated in 2016.  The judicial watchdog CHESNO has a whole dossier on Vovk, with disturbing information under three separate titles:  Involvement in corrupt dealings and crimes; unexplained property and dubious rulings.  It is possibly noteworthy that Vovk was the judge who, in August 2019, awarded Andriy Portnov, the First Deputy Head of Yanukovych’s  Presidential Administration during Euromaidan almost seven million UAH in damages purportedly inflicted upon his reputation by the Ukrainian authorities.  Since his return to Ukraine on the eve of President Volodymyr Zelensky’s inauguration, Portnov has played a very active role in trying to discredit Euromaidan and appears to have considerable influence on appointments and investigations, including those against Zelensky’s predecessor, in the State Bureau of Investigations.

Vovk’s role in political persecution was widely reported outside Ukraine and by the European Court of Human Rights. President Zelensky would do well to consider the impression made by the Chornovol case and by Vovk’s involvement in depriving Chornovol of her liberty.