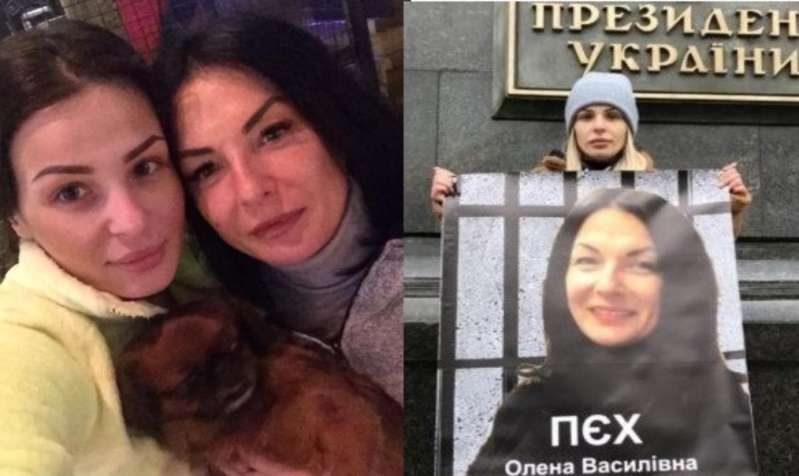 It is almost two years since 49-year-old Olena Pyekh was seized by militants from the so-called ‘Donetsk people’s republic’ [DPR], and a second exchange of prisoners has passed without her release.  Pyekh is epileptic and is also now suffering from other conditions linked with the torture she was subjected to and the appalling conditions in captivity.

Until 2014, Pyekh worked as a senior researcher in the research and educational department of the Horlivka Art Museum and authored several papers for the museum’s official publications.  She and her daughter, Isabella, left Donbas as soon as Russian and Russian-controlled militants seized Horlivka.  They settled in Odesa, however Pyekh’s elderly mother  remained in occupied Debaltseve, with her elder daughter.  In January 2015, following the battle for Debaltseve in which Russia is known to have deployed large numbers of its military, the elderly lady suffered a stroke.  She survived, but needed treatment and long-term rehabilitation for which Pyekh and her daughter organized the money.

It was during a visit to see her mother and organize further treatment that Pyekh was taken prisoner. She had been due to return on 20 August 2018, however on 9 August all contact with her was lost.  It was only on 16 August that Isabella Pyekh received a call from a total stranger who told her that her mother had been ‘arrested’.

Isabella Pyekh says that it took the family a huge amount of time to get any information about what had happened. .  A lot of people were frightened to talk with her, or simply didn’t answer their phones.  For some time she had no idea even if her mother was alive.

She now knows that her mother was seized on 9 August 2018 by armed militants who burst into their flat in Horlivka.  They removed her phone and turned everything upside down in the flat without explaining who they were and why they were doing this.  She was taken by car to Donetsk, to a military unit  and thrown into a cell alone.

In the morning, she was taken to a basement and tortured.  As well as beating her, the militants used electric shocks and asphyxiation (putting a bag over her head).  Her torment was to last for three months, during which she was held in solitary confinement without any water or basic requirements.   On 25 September she was driven to such despair that she tried to slash her wrists, though, thankfully, survived.

She was held in that military unit for three months, and then, on 25 October 2018, taken to the Donetsk SIZO [remand prison] and charged with ‘spying’.  Although the conditions there are also appalling, from then on at least there was no overt violence or torture.

The ‘spying’ charges seem to have fizzled and been replaced by “planning a crime on the territory of DPR” and “state treason”.   It was claimed that she had worked with Ukraine’s SBU [Security Service] and had “incited people to spy” by recruiting fighters and sending them to government-controlled Ukraine.  The SBU program ‘They’re waiting for you at home’ referred to has nothing to do with recruitment, but is an opportunity for militants who have not committed serious crimes to return to government-controlled Ukraine with the slate set clean.

Pyekh’s sister found her a lawyer, though his importance was mainly in being able to visit Pyekh and provide information to her family about her state of health, etc.

On 27 March 2020, Pyekh ‘was sentenced’ to 13 years for ‘spying and treason’.  The file material states that Pyekh “is declared guilty of contacts with a foreign intelligence agency, the SBU, and of having been recruited by SBU officers to come to DPR territory to recruit soldiers, so that they fled to Ukraine to pass on valuable information.”

The absurdity of the charges cannot be overstated.  Even were the specific activities she is accused of true, their classification by the militants is totally flawed.  Most importantly, there can be no ‘state treason’ to an entity which even Russia, which created and controls it, has stopped short of recognizing.  Without Russian weapons and Russian finding, the so-called ‘republic’ would collapse almost overnight.

As Isabella Pyekh notes, her mother is the citizen of only one country – Ukraine, and it is only Ukraine, her motherland, that she could, but would not, betray.  Olena Pyekh never concealed her pro-Ukrainian position and is paying a huge price for it, one that could become dangerously high due to serious concerns about her state of health.