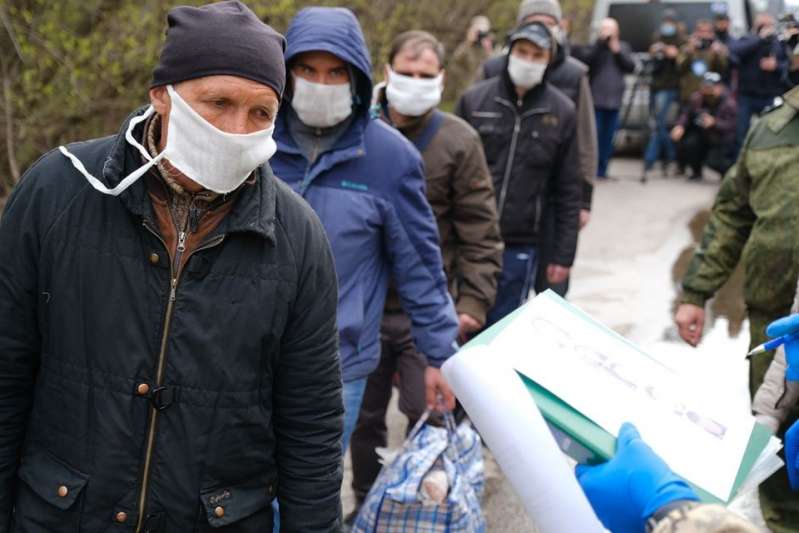 It is no accident that the third exchange of prisoners under President Volodymyr Zelensky has prompted a campaign on social media by family and friends of Russia’s Ukrainian political prisoners and hostages held by Russia’s Donbas proxy ‘republics’.  Their message is clear: it is time for Zelensky to talk with them and discuss real measures to ensure the release of their relatives, some of whom have been in captivity for years.

Immediately after the exchange on 16 April, Andriy Yermak, Head of the President’s Office, once again insisted that negotiations were underway for the release of all political prisoners held in occupied Crimea and Russia and that all Ukrainians held illegally would be returned.  The assurances have been heard before and, in fact, negotiations with Russia appear to be stalled.  During the exchange on 16 April, 2 POWs and 18 civilian hostages were returned to Ukraine while 17 people convicted of terrorism or treason were handed over to the so-called ‘Donetsk and Luhansk people’s republics’ [DPR, LPR].   Although any release of Ukrainians held by the militants is surely better than none, on this occasion, the exchange prompts questions not only in regards to those who were not released.

Oksana Romanyuk, Director of the Institute for Mass Information, has condemned the refusal to allow Ukrainian journalists to cover the exchange.  The excuse that this was because of the pandemic is not convincing, she says, as Ukrainian legislation obliges the Cabinet of Ministers to ensure the unobstructed work of journalists.  This was undoubtedly a matter of public importance, and she suspects that journalists were kept away to prevent them from asking uncomfortable questions.

Oleh Kotenko from the Patriot Group NGO called this the worst exchange that he has seen in all the years of the conflict.  He notes that this was the first time that an exchange was carried out without the involvement of the aggressor state, Russia, and with Ukraine effectively forced to agree to the militants’ conditions. Kotenko believes that Russia is gaining by this, because it can claim to not be a party to the conflict, with Ukraine obliging by negotiating directly with the militants.

Ukraine has consistently asked for hostages that the militants, probably prompted by Russia, have refused to free, however this time the discrepancies between the list of hostages demanded and those handed over was dramatic.

Two weeks ago, it was the militants who simply published their list of who they were willing to release.  Kotenko is not the first person to have called this exchange a political stunt, and one that now means Ukraine is obliged to carry out further disengagement which was a condition for the exchange.

Tetyana Katrychenko, from the Media Initiative for Human Rights, points out that a prisoner exchange is the simplest way to show implementation of the Minsk Accords and to quiet the wave of public discontent.  The problem, however, is that the list of those released contained virtually none of the hostages and POWs whose release Ukraine has been demanding for years.  Among those released were a few people who either had no link to the conflict or who may have collaborated with the militants, as well as those suspected of criminal offences.

Yermak is certainly right in saying that all are Ukrainian citizens, but growing frustration is  inevitable given the number of POWs and civilian hostages remaining in captivity, many of them having faced torture and appalling treatment for their pro-Ukrainian position and, probably, their actions in serving Ukraine.

None of the exchanges has ever come close to fulfilling the Minsk Agreement demand for a release of “all for all”.  This latest exchange, however, makes Ukraine seem weak, lacking in any leverage and unable to inspire confidence in their will or ability to bring home all Ukrainians held illegally by Russia or its puppet ‘republics’.

The POWs and civilian hostages still held in occupied Donbas

Although the full number is likely to be much higher, the East Ukrainian Centre for Civic Initiatives has named 50 POWs and civilian hostages, many of whom have been imprisoned for years for a pro-Ukrainian stand.  The following includes their fifty names and two or three others.

Two POWs were released on 16 April: Mykola Hrynenko and Viktor Shaidov.  Among those who were not released was Shaidov’s colleague, 37-year-old Ihor Hordiychuk, a solo father (of 10-year-old Maxim) who joined the Armed Forces in 2015.  His sister recalls his words at the time: “Who, if not I, will defend our land?”

Seven soldiers were seized by militants from the so-called ‘Donetsk people’s republic’ on 22 May 2019.  The militants tried to hide the body of one of the men, Roman Bespaly, returning it only towards the end of 2019.  Four of the soldiers were released in stages, leaving Hordiychuk and Pavlo Korsun in captivity.

Ihor Myronchuk a 49-year-old professional soldier whom the militants tortured for propaganda for the Russian and pro-Russian media.

55-year-old Valery Matyushenko, who was seized in ‘DPR’ on 15 July 2017.  It is likely that he helped Ukraine by gathering information about Russian military personnel based in occupied Kalmyske  The family had never concealed their pro-Ukrainian views, and shortly after Matyushenko disappeared, his wife Tatyana was directly warned that she would be next, and their son would end up in a children’s home.

49-year-old Olena Pyekh, a researcher from Horlivka who left Donbas with her adult daughter in 2014, but had returned to see her mother and organize rehabilitation for the elderly lady who had suffered a stroke.  She was sentenced to 13 years’ imprisonment for what the DPR militants called ‘state treason’’.

Vitaly Atamanchuk, a 68-year-old pensioner, sentenced to 17 years for ‘spying’

Roman Onishchuk , a POW, in captivity since June 2015